Herman Smith-Johannsen is considered by many as the man who brought the sport of skiing to America. He was born in Norway in the 1870s and started skiing as a toddler. At the age of 24 he emigrated to the upper midwest and worked as a machinery salesman using skis to transport his wares. The Cree Indians were amazed at the speed he could travel on snow and nicknamed him “Chief Jackrabbit.”

Johannsen moved to the Adirondacks in the 1920s and began designing nordic and downhill ski trails across the Northeast. He worked for the Lake Placid Club, Mont Tremblant, and Stowe Mountain Resort. Working with two other pioneers — Otto Schniebs and Hannes Scheider — he laid out a ski area on Marble Mountain, the first development on the slopes of Whiteface.

Another significant milestone in the history of downhill skiing was the construction of the road to the summit of Whiteface. The Pikes Peak Highway, completed a decade earlier, generated interest in creating a comparable road in New York.

This required an amendment to Article 14 of the New York constitution which prohibits development of the state’s forest preserve. As is required by law, the amendment was passed by two consecutive legislatures and finally approved by voters in a statewide referendum in 1927. Construction of the Whiteface summit road began in 1929 with a groundbreaking ceremony led by New York Governor Franklin D. Roosevelt.

Before 1930, skiing in the Wilmington area was primarily nordic — both ski jumping and cross country. Excitement generated by the 1932 Lake Placid Winter Olympics drove interest in downhill skiing. By the mid-1930s, rope tows began to spring up across New York and alpine skiing became established in Wilmington.

The Whiteface Memorial Highway was opened and dedicated to veterans of the first World War, in a ceremony led by US President Franklin Roosevelt on July 20, 1935. At a cost of $1.2 million, the road featured a steep average grade of 8%. At eight miles in length, it was billed as longest beginner ski trail in the state. 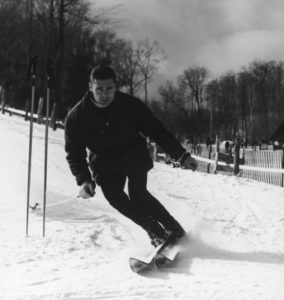 In 1938, Johannsen and members of the Lake Placid Ski Council began clearing an old logging road on Little Whiteface along the route that is now the Wilderness trail. The trail featured a 2700-foot vertical drop and became New York’s first certified Class A racing trail. Several major competitions were hosted on the mountain.

In November 1941, New York voters again approved a change in the state constitution, this time to create 20 miles of ski trails on the north and east sides of Whiteface. A month later the bombing of Pearl Harbor and the American entrance in World War II put the project on hold until 1948. After the war, the Memorial Highway became a major conduit for skiers headed uphill to the new ski area on the north slopes of Whiteface. Marble Mountain, one of the Whiteface subpeaks, stood near the route and was the focus of ski development.

The Marble Mountain Ski Area featured a T-bar and four rope tows serving five trails that had been cut by Johannsen. In April, 1949 Johannsen submitted plans for additional trails at the Wilmington turn of the highway. It had two rope tows on an open slope. The Wilmington trail linked the two sites. Tucker Sno-cats and army vehicles took skiers up the highway to the upper site, while the road itself doubled as a beginners trail. But Marble Mountain was plagued with high winds and struggled to be financially viable.

Averell Harriman, an entrepreneur and ski industry innovator, met Arthur Draper, the manager at Belleayre, while skiing in the Catskills. After Harriman became New York’s governor in 1954, he worried about the deficits at Marble Mountain and consulted Draper. They met to ski at Marble and discuss other potential sites for a ski area in New York. Eventually they agreed that the east side of Whiteface was worthy of development. By 1955, the joint legislative committee in Albany reconsidered the Marble Mountain development and Governor Harriman authorized an experimental trail on the eastern slope of Whiteface.

In 1957 $2.5 million was approved to cut trails, erect two chairlifts and a base lodge. The plan specified that one trail be at least 2,800-feet long, to satisfy requirements for hosting the Winter Olympics. On January 25, 1958, Harriman dedicated the new Whiteface Mountain Ski Center. In 1959-60, two seasons after Whiteface opened, the Marble Mountain Ski Area was closed. The outmoded trail design and windswept surfaces could not compete with the new ski area.

Harriman had pushed hard to make the new ski center a reality. When it all came together, he insisted that Draper serve as the first Whiteface general manager. Having already designed ski trails at Belleayre and Gore Mountain, Draper brought considerable talent and experience to the project. In the mid-1930s, while Harriman pioneering the first ski lift at Sun Valley, Draper’s innovative “ride up, slide down” concept helped make Gore a ski destination.

Whiteface proceeded through a series of expansions. The first major expansion in 1966 brought the mountain’s vertical to over 3,200 feet. A second expansion — costing $14.5 million — further prepared Whiteface for the 1980 Winter Olympics. In 1980 Lake Placid hosted the Olympic Winter Games with Whiteface as the alpine skiing venue. The mountain featured the downhill, giant slalom, and slalom alpine ski events. The following year, the Olympic Regional Development Authority (ORDA) was established to manage the venues of the Olympic Games, including Whiteface Mountain, and took over the management of Gore Mountain three years later.

In 1987 another constitutional amendment allowed trail widening and mileage limit increases at all three of New York’s state owned mountains. Under ORDA from 1998 to 2008 more than $26 million was spent on expansion and improvements.

During these years, Whiteface became a training venue for ski racing and hosted US National and World Cup competitions. Nearly 75 years later, the legacy of the 1938 racing trail on Little Whiteface continues to grow. The mountain remains an Olympic Training Site and hosts major ski events including the U.S. Alpine Championships.

Whiteface Mountain is the fifth-highest mountain in New York State. Set apart from the other High Peaks, the summit offers a 360-degree view of the Adirondacks, Vermont and Canada. Located in the town of Wilmington, the mountain is home to the ski area with the greatest vertical drop in the eastern United States.

15 comments on “The History of Whiteface Ski Center”