Whiteface is in the Adirondack High Peaks, on Route 86, in the town of Wilmington, NY. The ski area is 9 miles from the village of Lake Placid, NY, the site of the 1932 and 1980 Olympic Winter games.

Proximity to Lake Placid is the reason Whiteface is consistently rated as one of the top resorts in the Eastern United States for off-hill activities. Opportunities abound, including ice skating on the Olympic Oval, tours and events at the Olympic Center, elevator rides to the top of the 120 meter ski jump and snow tubing at the Olympic Jumping Complex, luge and bobsled rides at Mt. Van Hoevenberg, cross-country skiing and more.

Whiteface and Lake Placid are also regular stops on the World Cup Freestyle Skiing and World Cup Bobsled tours, providing an opportunity to see some of the world’s top winter sports athletes compete.

Whiteface is sometimes referred to as “iceface” and it does live up to the reputation from time-to-time. With a summit elevation of 4,867 feet, weather at Whiteface can be extreme, with temperatures well below zero degrees and wind speeds in excess of 50 miles per hour. Wind holds on the lifts are not uncommon, and it is always wise to consult weather forecasts before planning a trip. Make sure to have a backup plan for days when the weather is not cooperating.

On the upside, Whiteface is, almost without exception, the coldest mountain in New York and can get snow when the rest of the state is wet. The mountain averages 190 inches of snow each year.

Whiteface Mountain is the 5th tallest mountain in New York with a summit elevation of 4,867 feet. With a vertical drop of 3,430 feet, this mountain is tops in the East. Unlike some other mountains, the reported vertical at Whiteface represents skiable top-to-bottom, continuous fall-line. The lift-served vertical comes in at 3,166 feet. The difference includes The Slides, which require a short but challenging hike from the top of the Summit Quad.

Whiteface can be broken down into five sections: The Summit, Main Valley, Little Whiteface, Lookout Mountain and Kids Kampus.

The Summit is serviced by the Summit Quad with a vertical drop of 1,830 feet. The trails here are long and steep, though there is a beginner trail called The Follies, which is a series of switchbacks allowing novice skiers the opportunity to ski down from the top.

Access to the “sidecountry” is also found here. The Slides are a unique, lift-served ski experience, consisting of unmaintained natural terrain, including trees, rocks, ledges and a frozen waterfall. The Slides are not open often, so consider yourself lucky if you get a chance to ski them.

The Valley area is made up of primarily beginner and intermediate trails and is served by the Cloudsplitter Gondola and the Face Lift quad. These are long, gently sloped trails, providing an excellent opportunity for novice skiers to improve their skills.

Lookout Mountain is the newest addition to Whiteface trail map. The terrain here is difficult. Sections of the intermediate rated Wilmington Trail — the longest run at Whiteface — would warrant an expert rating at virtually any other mountain. The installation of snow-making on Hoyt’s High was a big step forward for Whiteface.

Kids Kampus is a novice area, separated from the main mountain, where all of the children’s programs are located, including the nursery. There is a separate parking lot and base lodge located here, which includes a small equipment rental shop and a cafeteria, though the food service at the cafeteria could use some improvement. There are several beginner trails here and a “magic carpet.” There are ski trails connecting Kids Kampus with the main mountain, and shuttle bus service is also provided between the main base lodge and the Kids Kampus Lodge.

For more, see our Whiteface Blog. 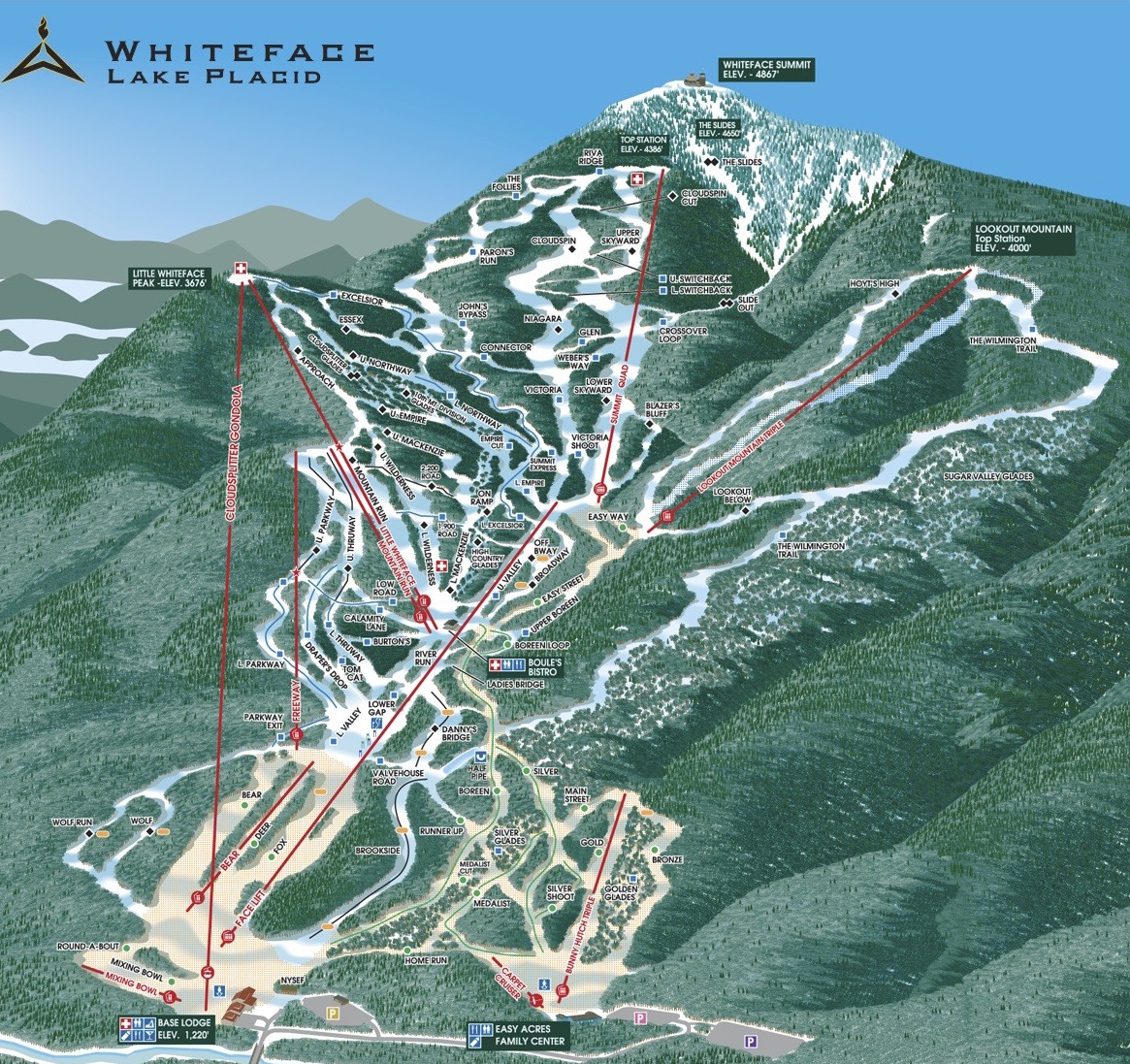 *includes trails, glades and The Slides