Rising above the Hudson River in Warrensburg NY, Hickory Ski Center is a hidden gem that is most commonly passed by while heading north to other ski areas.  To the average recreational skier, Hickory is a failed attempt at a 1950’s ski mountain. But in the eyes of a born and raised Hickory skier, or someone lucky enough to have stumbled across it on an epic powder day, it is the epitome of what northeast skiing should be.

At Hickory you’ll find a lodge — straight out of the 1950’s with a one of a kind handmade fireplace — filled with generations of Hickory Hill families. Then there is Hickory’s front porch, a porch that brings people together. It runs the entire length of Hickory’s lodge, looking up at Poma 1 and Hickory’s main slope “The Hunny Run.” It’s the perfect sun spot for a relaxed lunch or après ski drinks at the end of the day.

The terrain at Hickory is something special. The trails are old school, untouched by construction equipment or blasting. Get it on a good powder day, and the tree skiing at Hickory is what really sucks people in. Hickory lives off only natural snow, which adds to that vintage ski experience. This is the place to be on a major dump. Fresh tracks are waiting for you on a Saturday morning as Hickory is only open on weekends.

With 1,200 vertical feet and 19 trails, the mountain may seem small, but three surface lifts provide access to all different types of terrain. The majority of this mountain is hand cut by members, ski patrol, and enthusiast volunteers. Lines in the woods have been strategically placed and cultivated over years and years. On a powder day, you might have a trail all to yourself, or be surrounded by the faithful. Hickory skiers are tightly knit and often go up the lift in a line together, wait for each other at the top to ski together in one big posse.

Hickory is not a resort, and Hickory skiers don’t need “resort wear.” Hickory Gear includes an older jacket maybe with some duct tape in case a warm spring day causes the 1950’s Poma Lift to drip some of grease. And you’ll always need your Hickory skis, because you don’t really want to know what you skiing over.

Hickory is known for its family-friendly atmosphere. Most skiers are second or third generation of Hickory skiers who call Hickory home. It is safe to say that you can come to ski as a family, or leave the children in the lodge for a few runs on your own.

For more of our front page coverage see our Hickory Ski Center Blog.

Hickory has been closed since 2015, but now there is a plan to reopen. 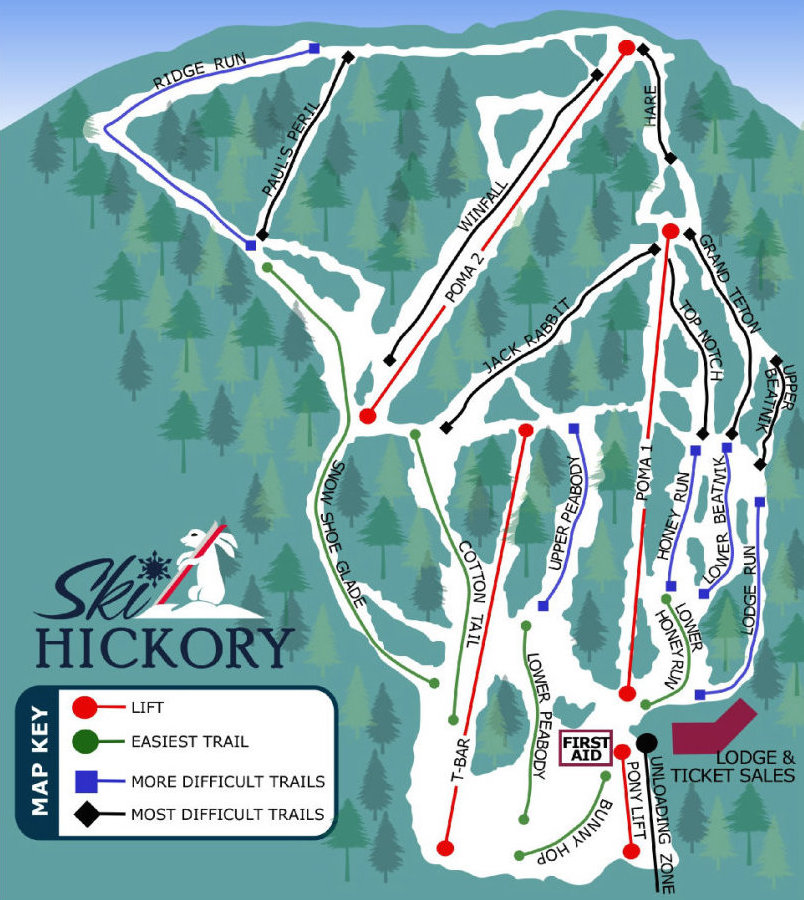