To some, missing the Super Bowl is sacrilege. As far as I’m concerned it’s a ski day, but my eleven year old doesn’t agree. When we were pass holders at Mount Peter, we were close to home and it wasn’t issue. An early arrival and departure would give us plenty of time to ski Belleayre and see the big game. 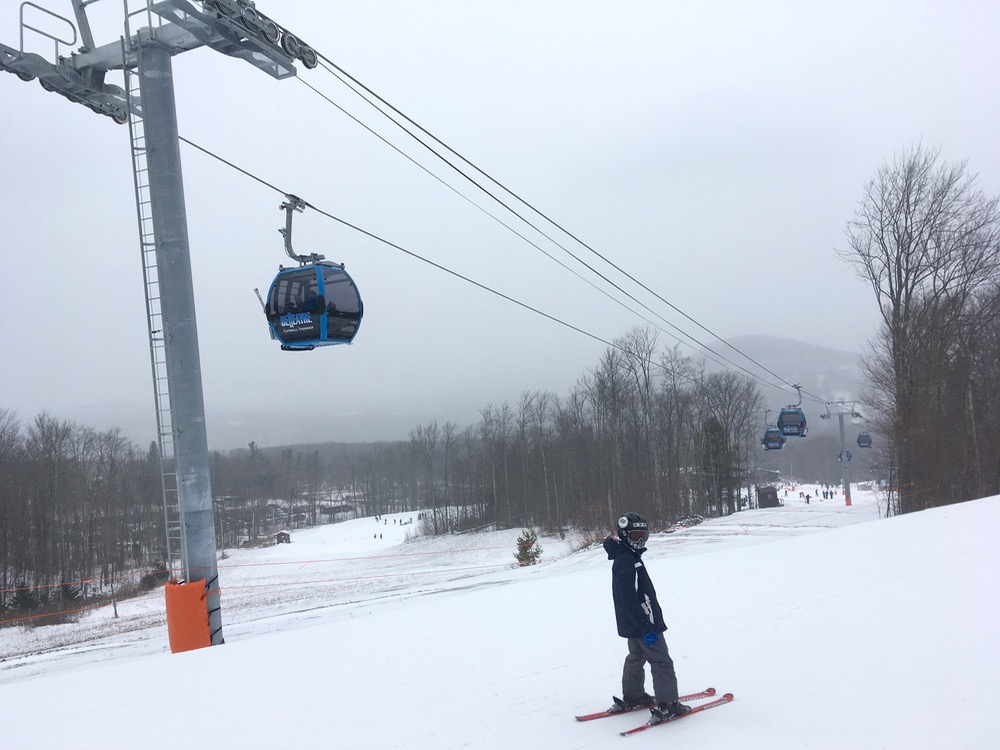 Of all the improvements made at ORDA ski resorts this year, the one which generated the most discussion in the NYSB Forum, was Belleayre’s new gondola, the Catskill Thunder. There was skepticism of the need for a gondola and anxiety about the cost while others supported the idea with full-on fanboy enthusiasm. Super Bowl Sunday was a great opportunity to see for ourselves.

We arrived at Belle around 8:30. I grabbed our MAX tickets at the Overlook lodge and parked at the Tomahawk Quad. We were the second car there. The top of the Tomahawk — and the new gondola — access Deer Run, the trail that was extended down to the Discovery Lodge and the gondola. We were here to check out Belle’s improvements so skiing Deer Run was our first order of business. 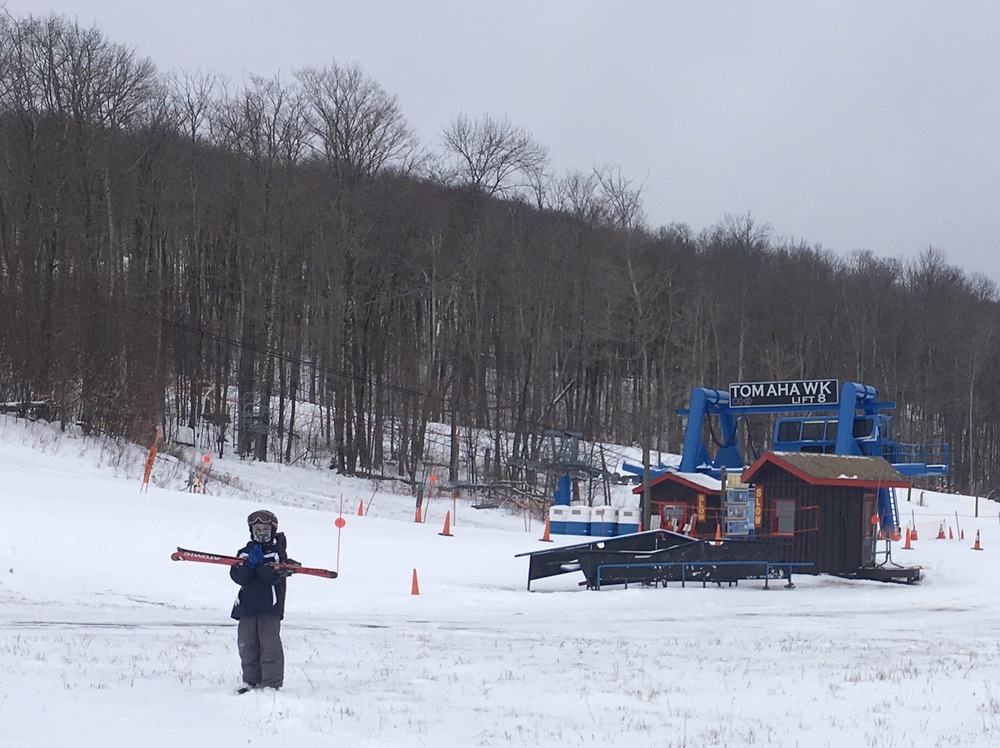 With the gondola not loading yet, the upper part of Deer Run was its familiar self, a nice winding, uncrowded intermediate run with enough pitch to ski fast but not enough to challenge my eleven year old. I felt obligated to criticize his continued use of a wedge technique, something he should have left behind by now.

When we got back to the bottom of the Tomahawk, we kept on across the new bridge to the recently cut lower section of the trail. Apart from the steepish pitch after the bridge the new trail is a pretty standard green cruiser. Anybody that can ski, can ski it. 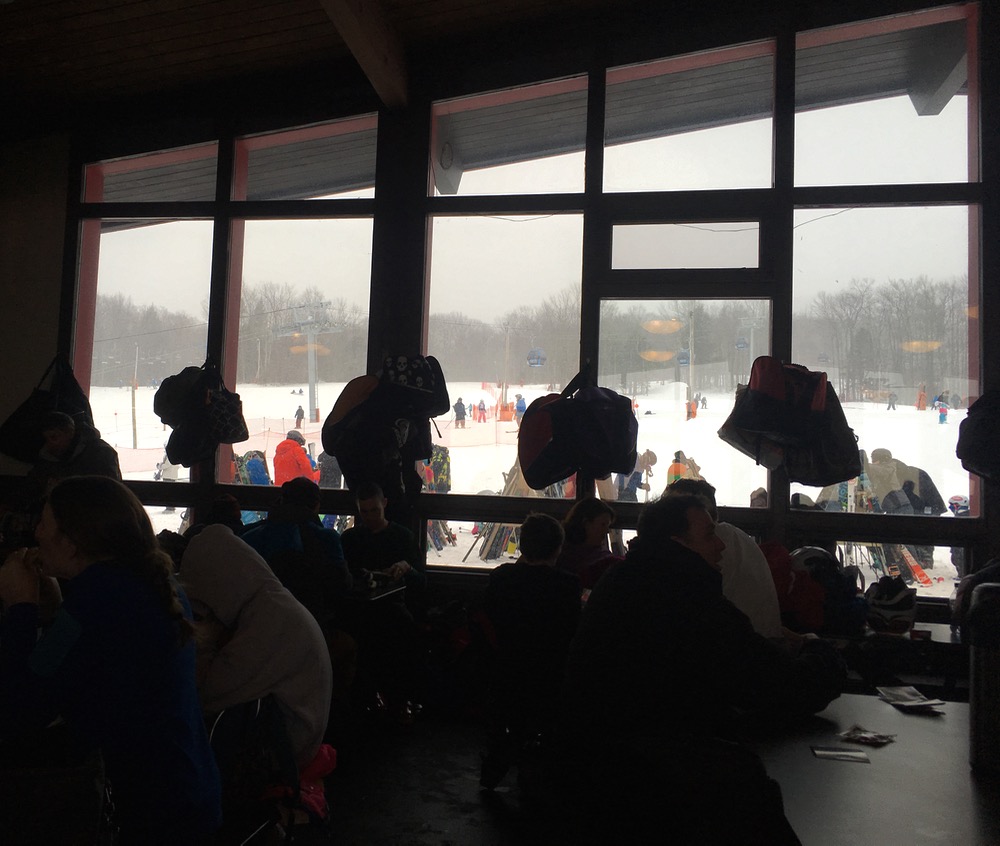 The gondola hadn’t opened when we reach the Discovery Lodge. It was windy at the top so we assumed it was on hold. We jumped on one of the fixed-grip doubles and were reminded of the justification for the new gondola. The old doubles are slow, which is why a lot of Belle regulars don’t go down to Discovery. We made it to the top with a few stops and skied over to the Super Chief Quad to catch a ride back to the top of the ridge.

Back on familiar ground, we spent time skiing off lift 7. We could see the gondola moving but the cabins were empty so we stuck with the Tomahawk. Eventually we saw gondola cabins carrying skis, so we skied down to check it out. After all the discussion the Catskill Thunder was like any other gondola, it got us out of the weather and back to the top quickly.

The experience of skiing Deer Run changed completely from earlier in the morning as it was much busier. My sons well-honed wedge technique was actually perfect for threading his way through successive groups of hesitant beginners. After that, we shifted back to the Tomahawk, skiing Lower Seneca and Peekamoose, which we could get to from the mid-station. We made our way down to Discovery for lunch.

The gondola cabin walls are completely transparent, which is really nice  and should be a selling point in the off season for sightseeing and leaf peeping. In spite of it being Super Bowl Sunday, Belleayre was doing a good business; Overlook parking was full with a line of cars extended down the road. The new lift certainly prevented lift lines from becoming onerous and Tomahawk was practically ski-on all day. A good one, and we’ll be back.