Finally, a day off with nice weather. Unfortunately, working until 9 PM Saturdays makes for poor odds for a dawn patrol start Sunday morning. As I organized my kit, I had no particular plans. Only that it was too late in the morning for a Catskills expedition. 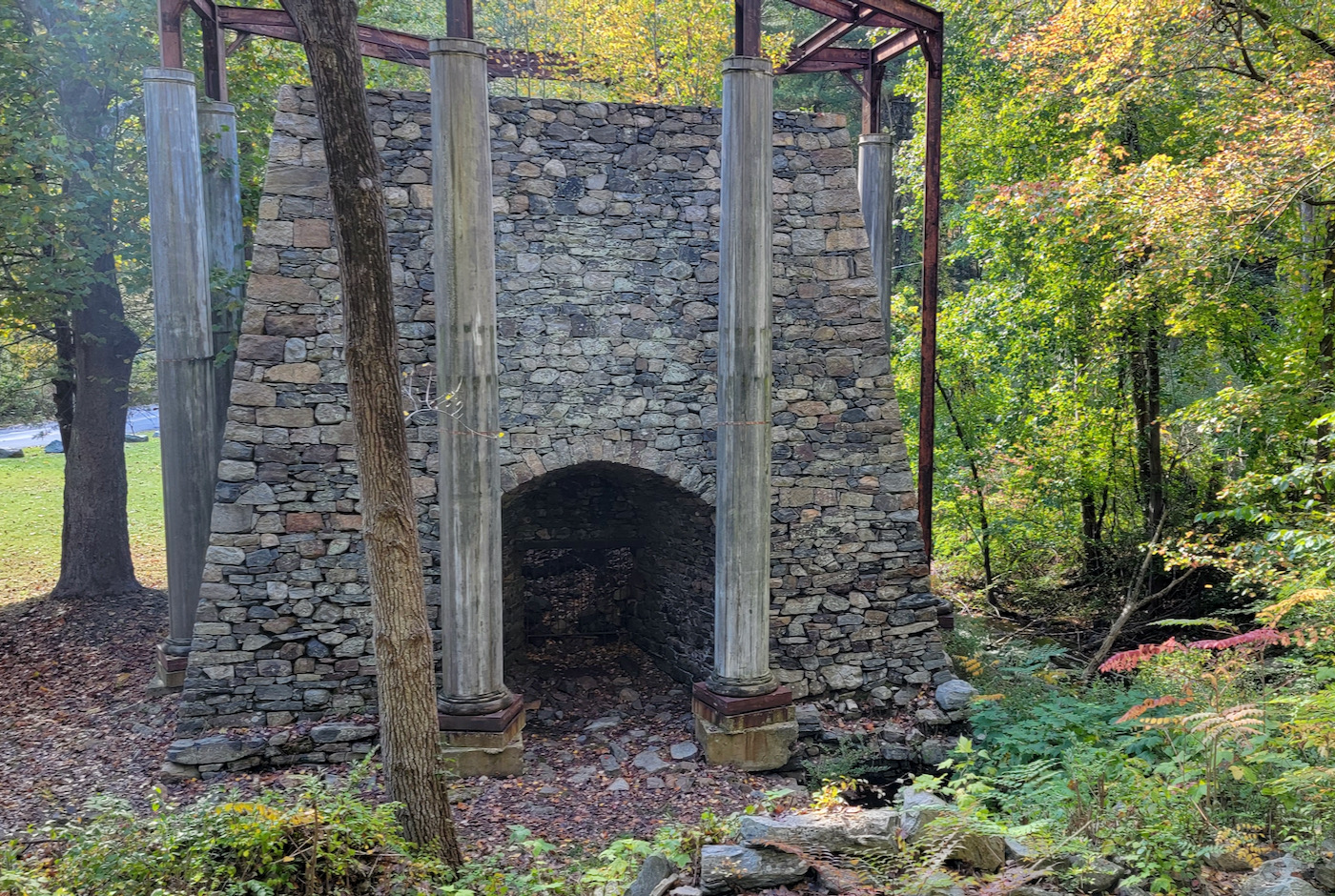 I fired up the diesel shooting brake, then I looked at a road map… anyone still use those? Jenny Jump, Stevens State Park… nothing in NJ appealed.

There was Sterling Forest, abutting the NJ-NY state line in Tuxedo. Never been there. Why not? I slipped the clutch, and off we rolled.

Like Lake Minnewaska, Sterling Forest is managed by the Palisades Interstate Park Commission. Unlike Minnewaska, they don’t charge to enter. When I arrived, there was almost no place to park. It reminded me of the darkest days of the pandemic, when hordes of people rode or tramped on trails I used to have to myself. 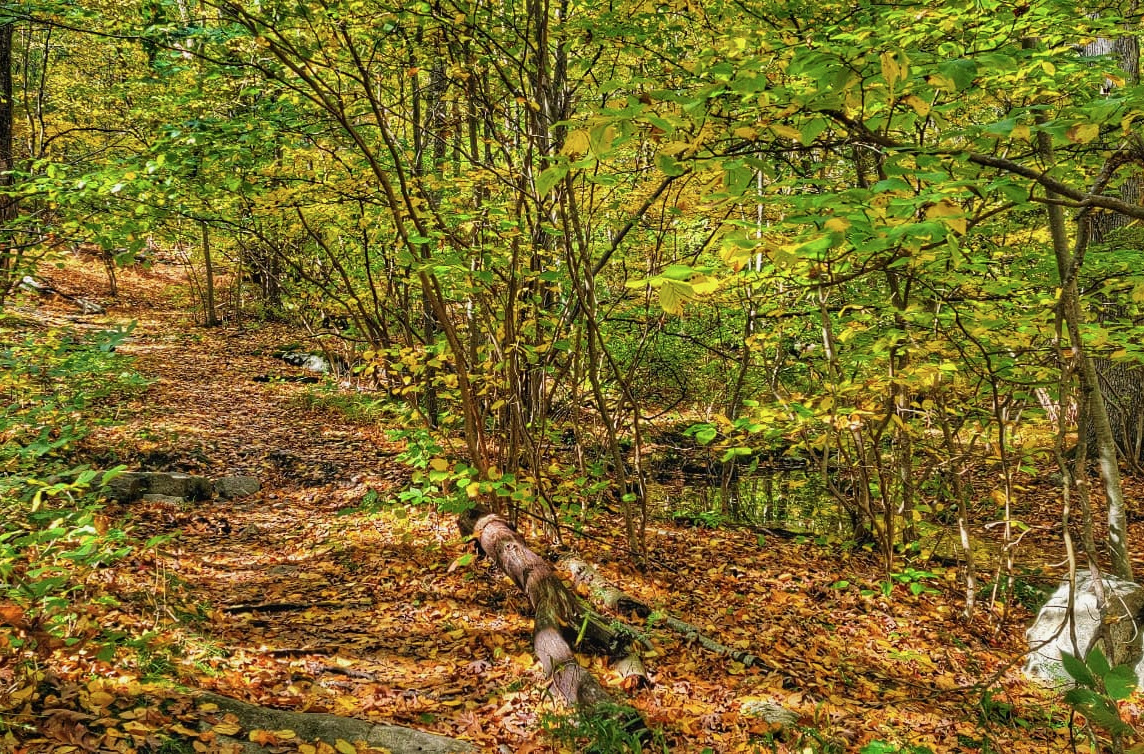 At the visitor center, the ranger gave me a map. It was a nice color topographic printout from Google Maps, with the trails in orange, red… whatever color the trail markers were. She recommended the Bare Rock loop, which afforded a view of Greenwood Lake. “It’s four miles” she said.

I folded the 8.5” x 11” paper and stashed it in one of the pockets of my hydration pack. Four miles. So I could run Bare Rock, then loop around Sterling Lake, and make a decent day. 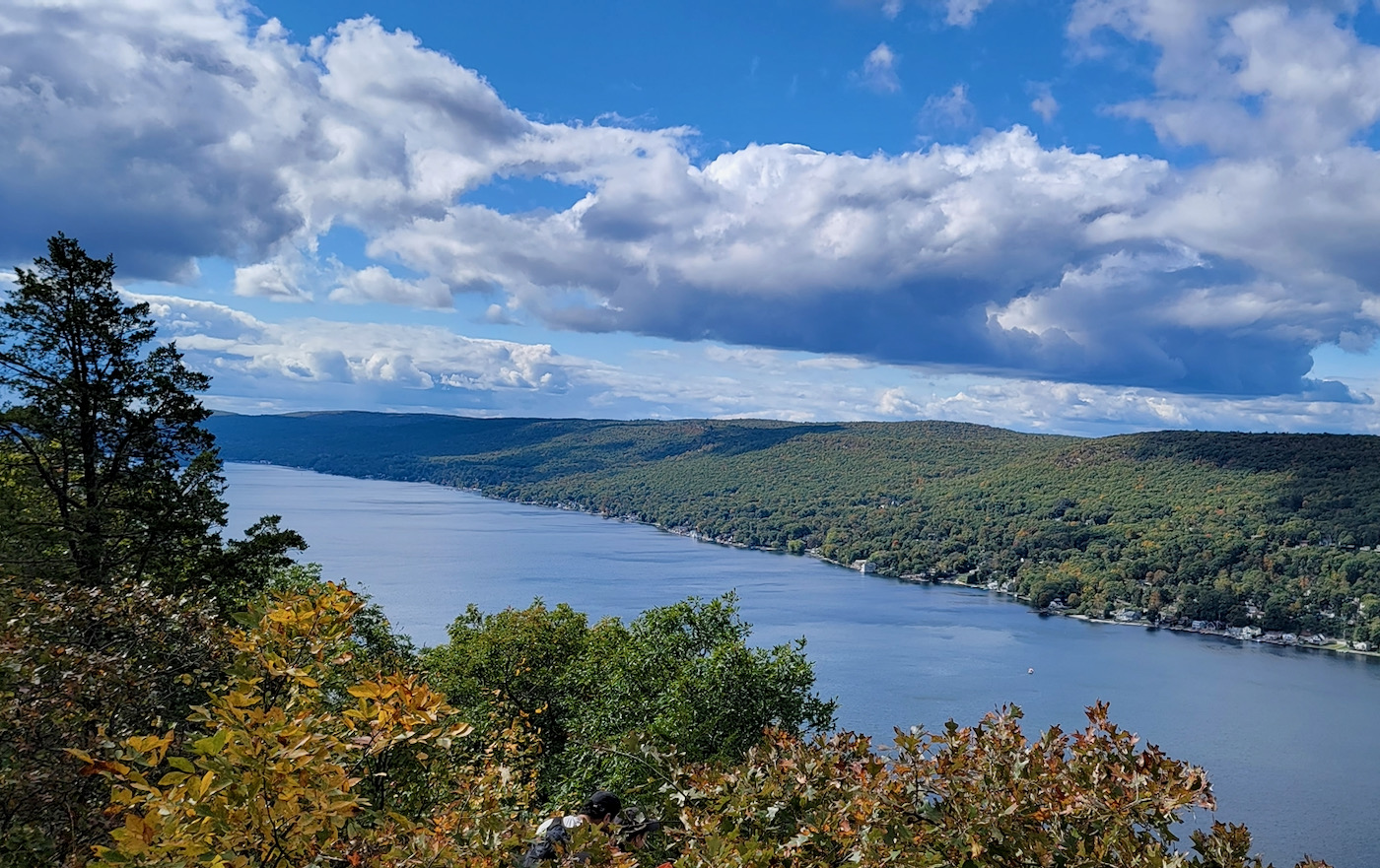 The woods and terrain here are similar to Wildcat Ridge, Farny State Park, and Bearfort Ridge on my side of the state line. Lots of hardwood forest, punctuated by hemlocks here and there. The occasional glacial erratic, trails that ranged from runnable to technical. Mining started in the 1840s, later than at Wildcat Ridge. 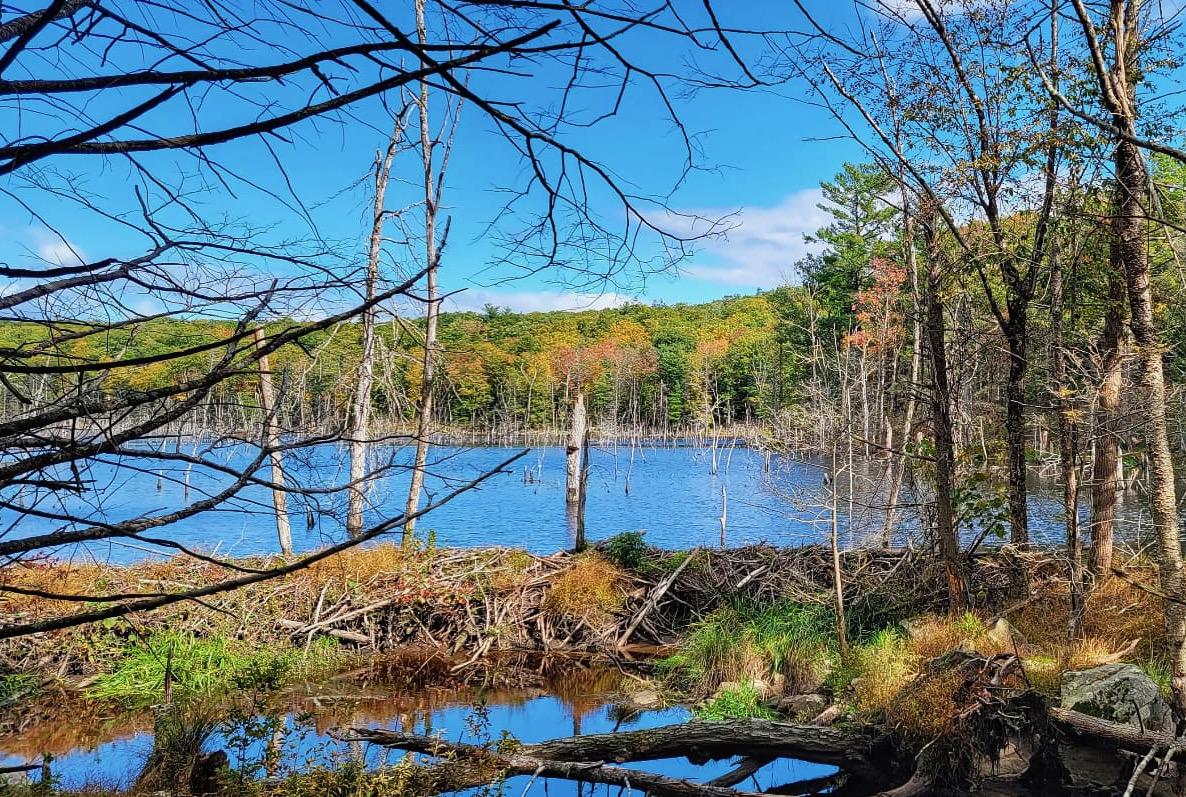 Bare Rock is a steady climb, intersecting along the way with other trails. At one intersection, I stopped to check the map to see how far out I’d run.

The map was gone. It must have fallen out when I stopped to tighten my shoelaces. Uh, Salomon? The speed lace system works great on nordic ski boots. On trail shoes, not so much.

So: unfamiliar territory, no map, no headlamp, compass, or emergency blanket… just a liter and a half of sports drink and two extra layers. The smart money would have turned back, but I’d started at 11:30 and already gone a mile and a half out of four. Bare Rock had been a big orange loop on the map, and I was running it counterclockwise. Then you link up with the Fire Tower Trail, and back to the car you go. I decided to take the plunge and keep moving ahead. 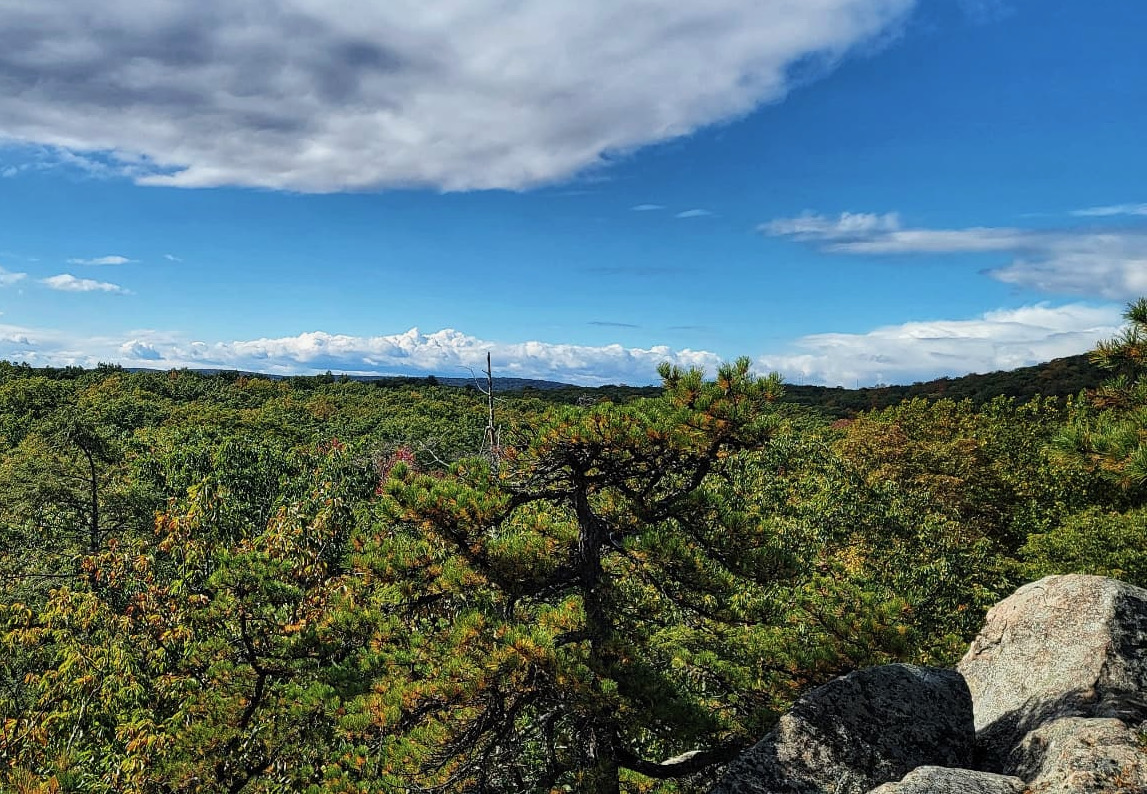 Up, up, up. Never brutally steep, but a steady climb. At around three and a half miles, I diverted to the eponymous rock outcropping overlooking Greenwood Lake. Did the ranger miscommunicate, or had I not been listening? Whatever, Bare Rock was gonna be noticeably longer than four miles. Meanwhile, the scene at Greenwood Lake is jarring juxtaposition. The Appalachian Trail was on the ridge above the lake. On the shoreline, houses and marinas sat cheek by jowl.

After grokking the view and memorializing it via camera, I climbed back to the Bare Rock Trail. Settling in for a taste of the unknown, both in terms of new place and no reference points. After another half mile, the trail wended downhill. Eventually I got to a junction with a connector that took me to a beaver pond and an unpleasant encounter with an unleashed German shepherd. It might be time to resume packing pepper spray. 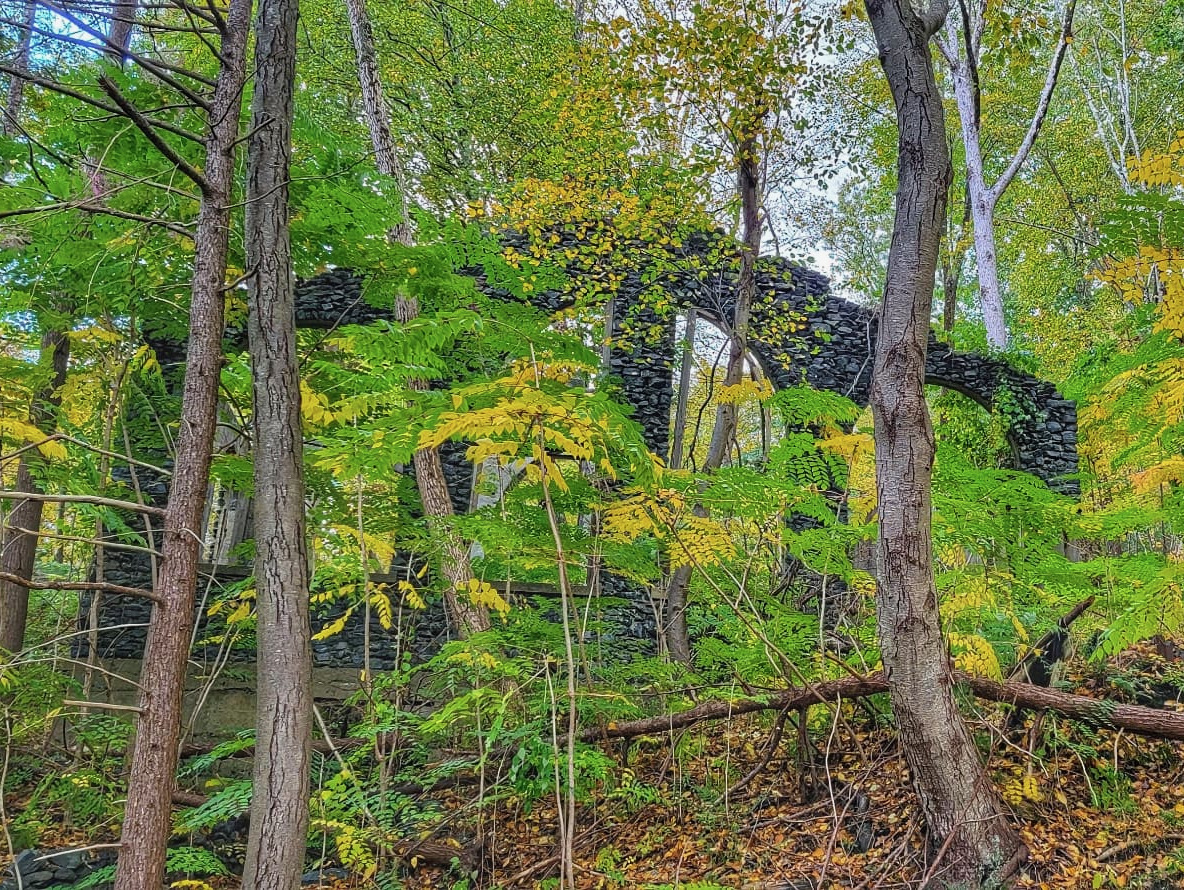 The connector wound around the beaver pond to the Fire Tower trail, and I knew I was in the home stretch. Just so you know you’re in the northeast, Fire Tower includes two stiff technical climbs straight up the fall line. The second one topped out with the fire tower, which I skipped. From there, the trail became a truck road at a reasonable downhill grade. Back to the road, back to the visitor center. It was eight miles by the time I reached the shooting brake.

All in, a good day. Well marked trails and my memory of the lost map allowed me to dodge a bullet. That’s not something I’d try in for example, Harriman State park, where I always manage to get turned around. If you haven’t been to Sterling Forest, it’s worth the trip.