This past weekend would have been the 14th consecutive Ride the Ridge bike tour, an annual charity event for the High Meadow School in Stone Ridge, NY, which has become one of the premier rides in the Hudson Valley. 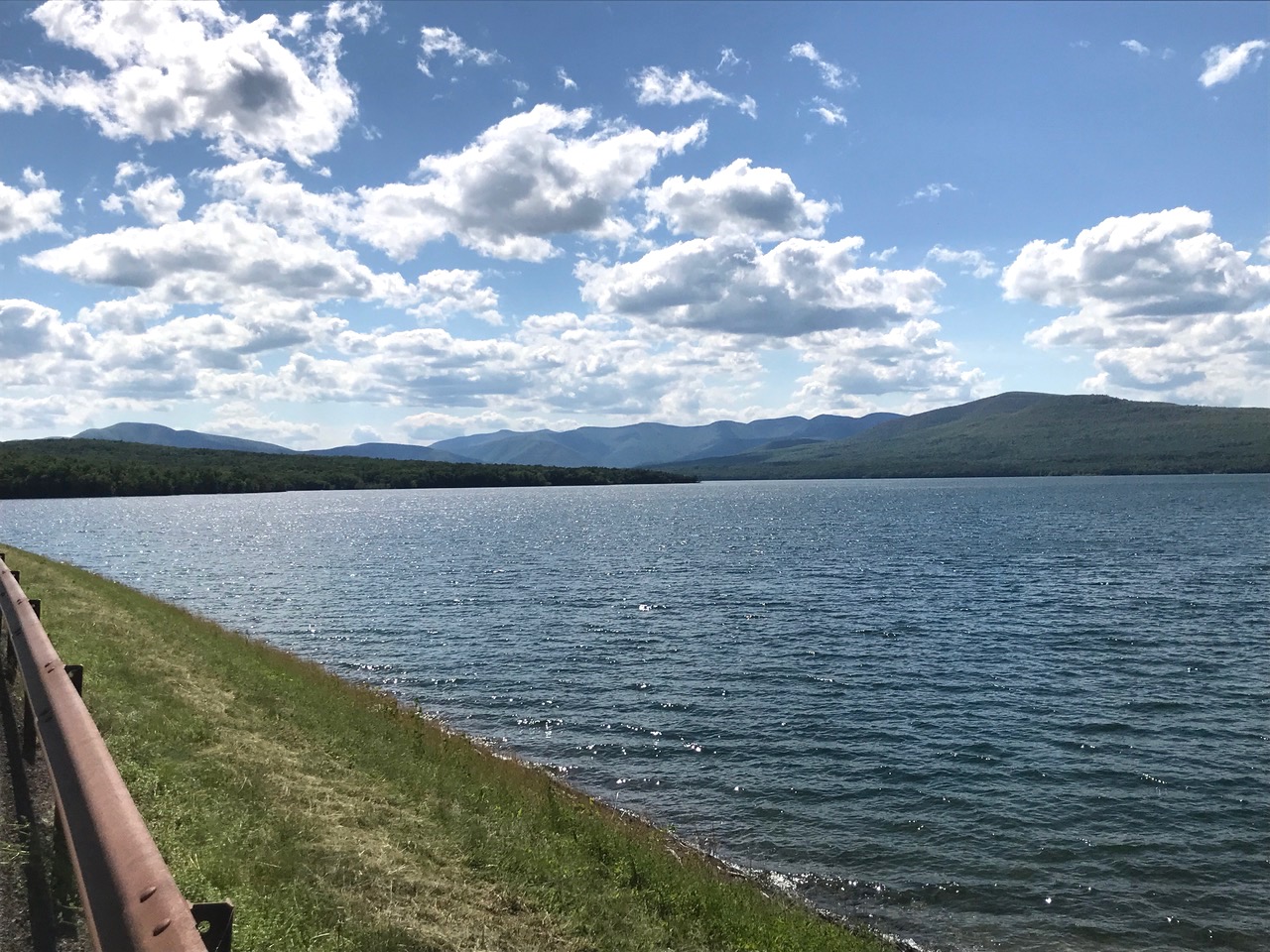 It draws hundreds of cyclists from all over the region and beyond; including a couple of my favorite cycling (and ski) buddies who drive up from NJ and Philadelphia every year to carbo-load on pierogies and beer, and crash on my couches the night before the ride.

Events this year threw a wrench into the works of many group rides this season, and RTR has been postponed to October 3rd. Normally, we would wake at sunrise to be in Stone Ridge for the 8am start of the 50 mile ride. 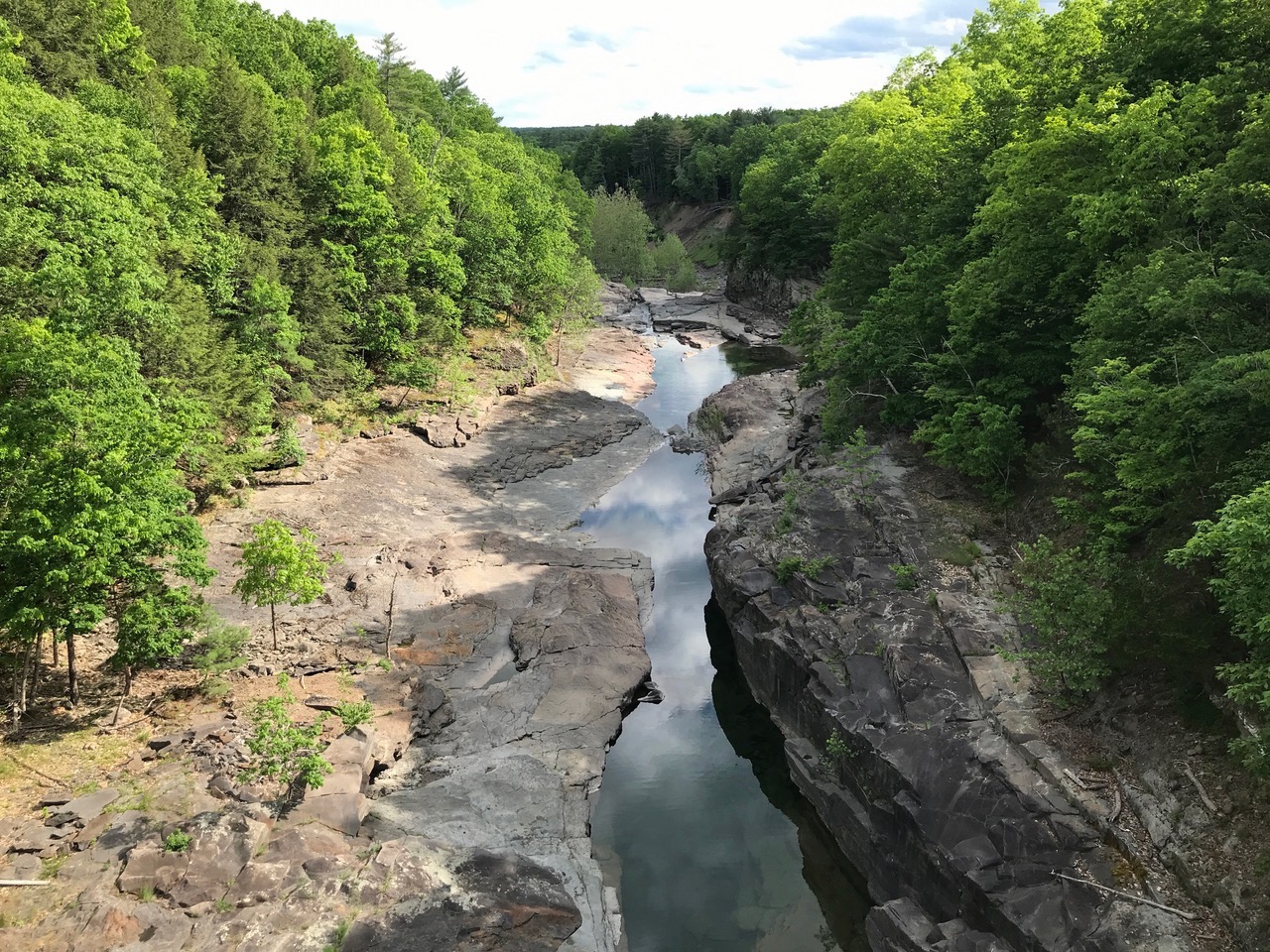 The route runs along the west side of the valley along the Shawangunk Ridge, and then climbs up and over the Ridge along Route 44/55, past Lake Minnewaska State Park, and down the east side of the Gunks into Gardiner. You travel a big loop through beautiful farm country with the majestic cliffs as the backdrop. Then, finally, it’s north towards Rosendale and back up to Stone Ridge to complete the ride, with a total of 3,071 feet in elevation gain.

I haven’t had much road time for training this year, and on this day, I opted for a variation on the 30 mile ride, which is a loop from Stone Ridge to the Ashokan Reservoir. I live along a section of the 30 down the road from the reservoir, so leaving straight from my garage was appealing. The ride normally runs on the Saturday of the last weekend of May or first weekend of June. I figured I would devote some time on both Saturday and Sunday to getting some miles and time on the road. 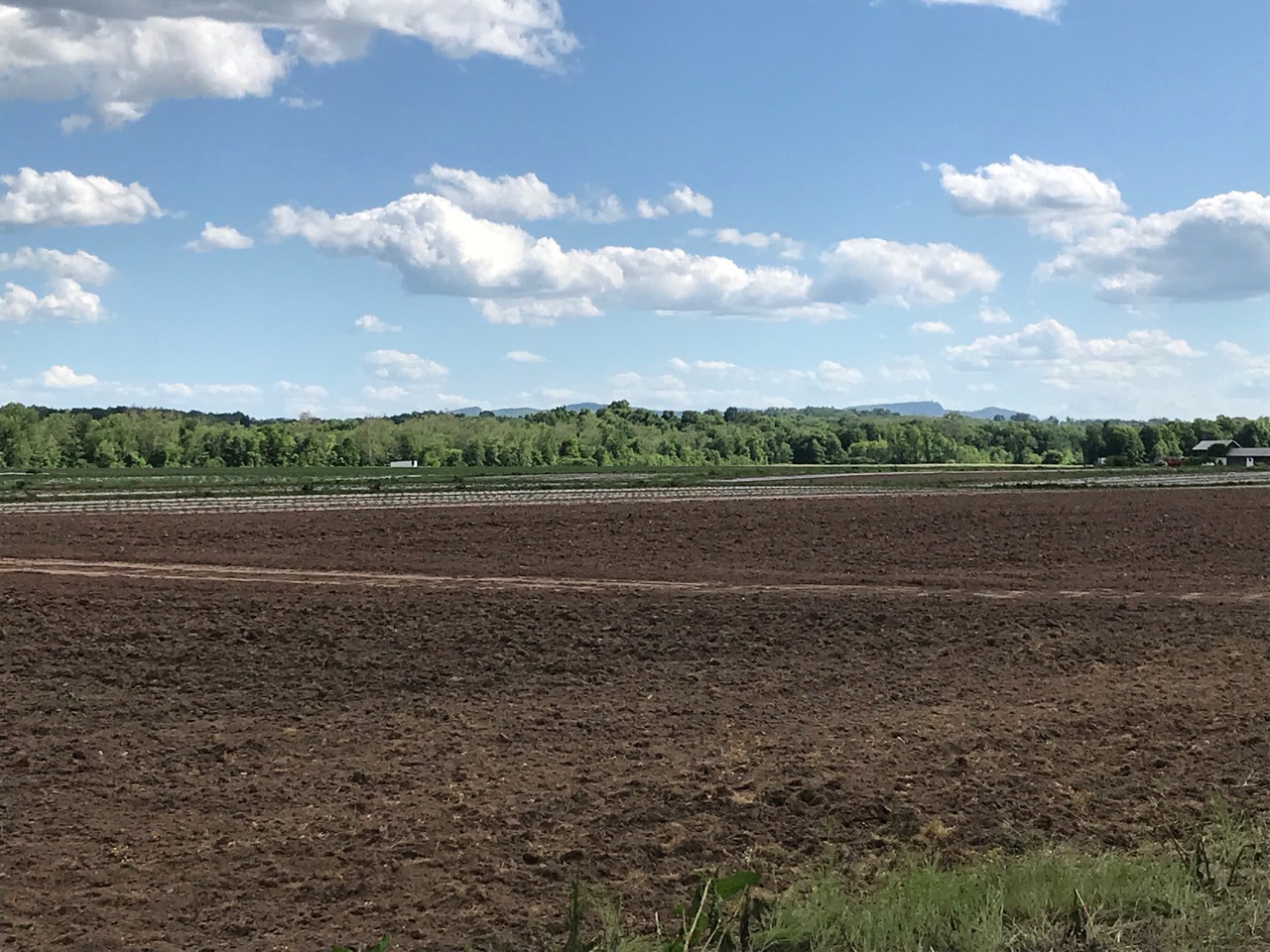 I got out on the road early in the afternoon riding over the Lower Spillway Falls and up Spillway Road towards the east end of the reservoir. The view of the Catskills from the eastern dike is sweeping, with High Point and Peekamoose on the left and the summit of Slide Mountain peaking out over to the right.

Next I headed down the long, steep and fast descent of Dug Hill Road to the farm country of the Rondout Valley, with the Gunks and the Skytop Tower at Mohonk off in the distance. Then I climbed back up Route 213 towards the reservoir and home to end the ride. 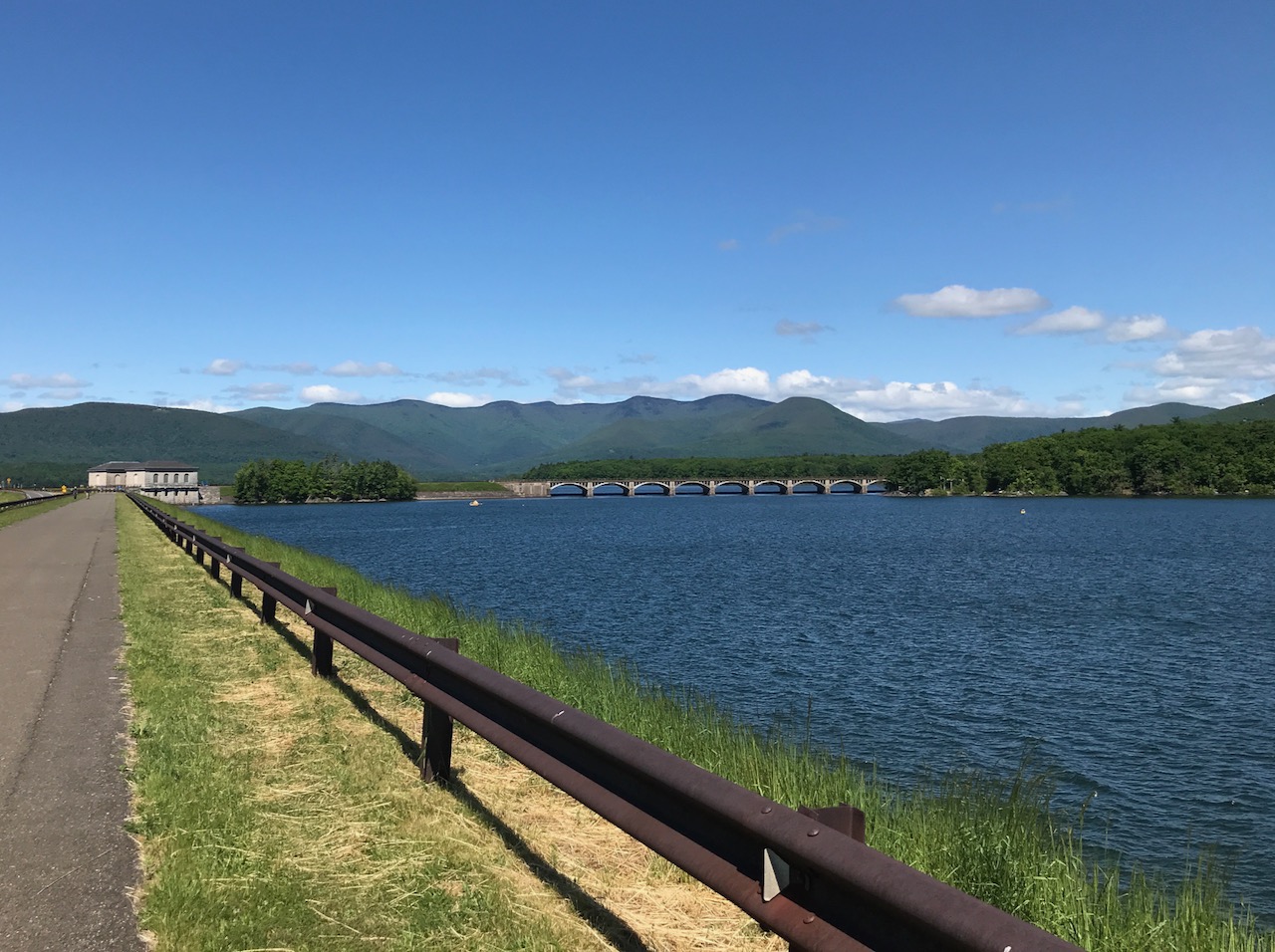 This late in the day, I chose to avoid the reservoir promenade, as there would be many people out for a stroll and social distancing would be difficult. In the end I logged 30.15 miles in 2 hours and 10 minutes, with an overall elevation gain of 1,928 feet.

Sunday morning brought cooler temps and an earlier start, so I went to the east end of the reservoir promenade, known as the Frying Pan, and headed west towards the Lemon Squeezer, a narrow strip of the weir where thankfully, there were few people on this breezy morning. 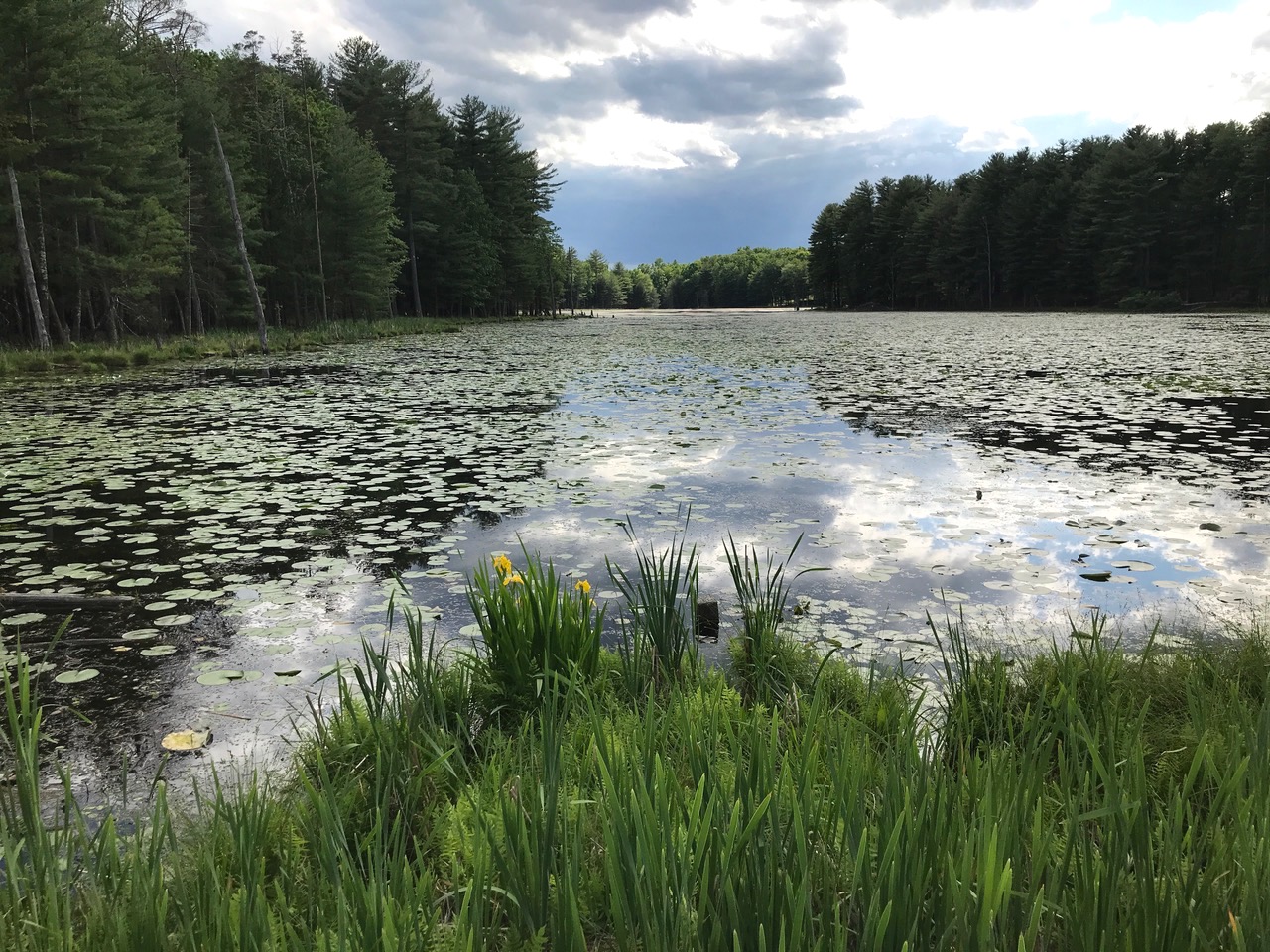 This part of the weir used to be open to automobile traffic, but was shut down after 9/11 due to fears of a terrorist attack on New York City’s water supply. The Lemon Squeezer was thought to be particularly vulnerable to a car bomb attack, due to the narrow width of the weir in this section. These days only DEP vehicles are allowed on the weir, as well as pedestrians and cyclists. This section also offers the chance to view bald eagles, as they nest in this area of the upper basin of the Ashokan.

Once I got back onto Route 28-A, I headed west and turned to Samsonville Road, where I began climbing. This section of road wraps around the base of High Point Mountain, at just above 1,000 feet. In the hamlet of Samsonville, I turned onto Brown Road, which winds through forests and fields that have a distinct New England feel to them. 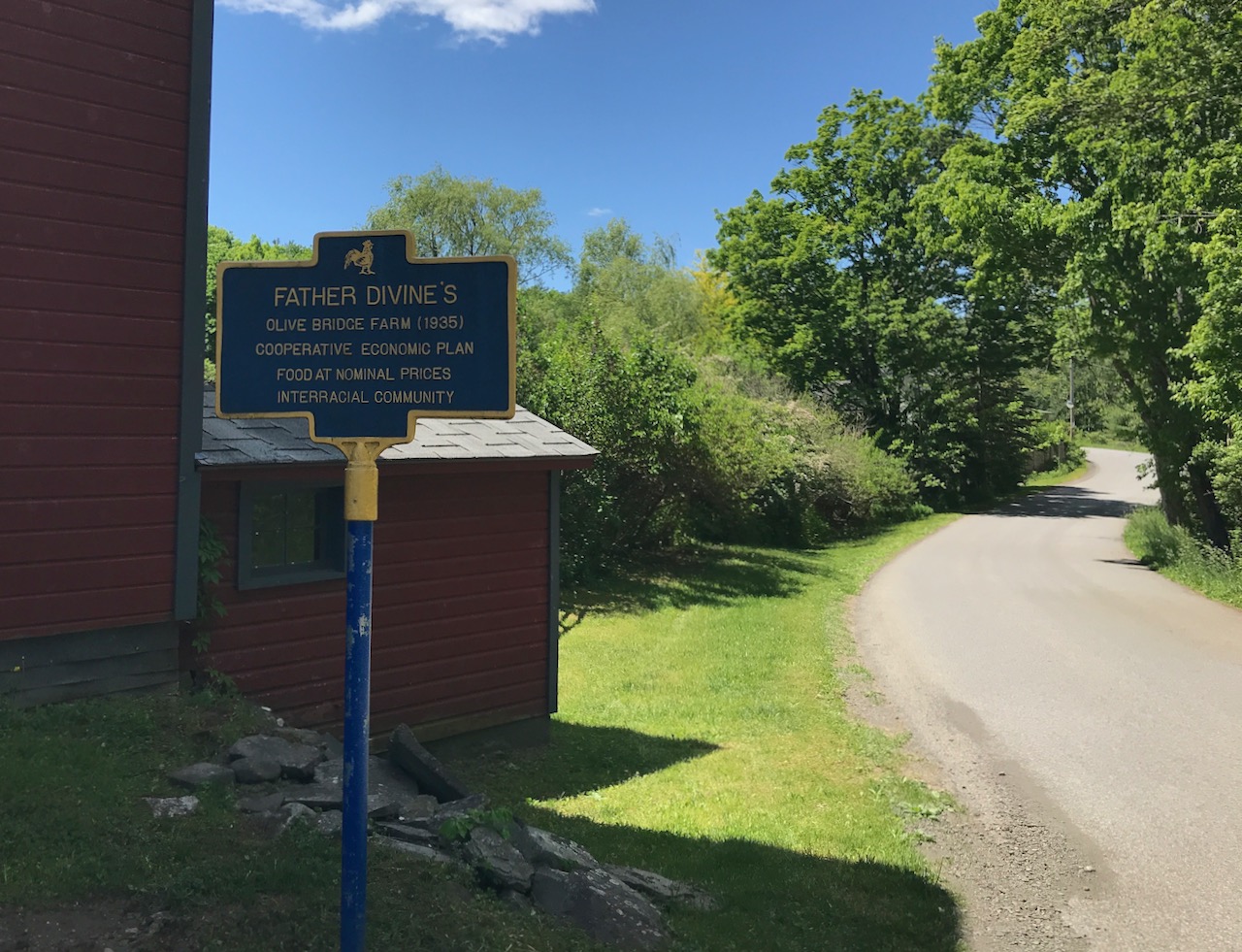 Brown Road leads to Sahler Mill Road, where I passed a farm once belonging to Father Divine, an African-American spiritual leader and founder of the International Peace Mission Movement in the early part of the 20th century. This farm was an interracial community and cooperative in the 1930’s and has been designated a New York State historic landmark.

From Sahler Mill Road, I turned onto Krumville Road and headed northwest towards Olivebridge and the reservoir. Again to avoid close contact, I turned east onto Route 28-A and over to the Upper Spillway Falls. Back in April, these falls were roaring from all the rain and snowmelt, with over a billion gallons of water going over each day. But on this morning there was barely a trickle making its way through the Spillway Gorge and into the Esopus Creek. 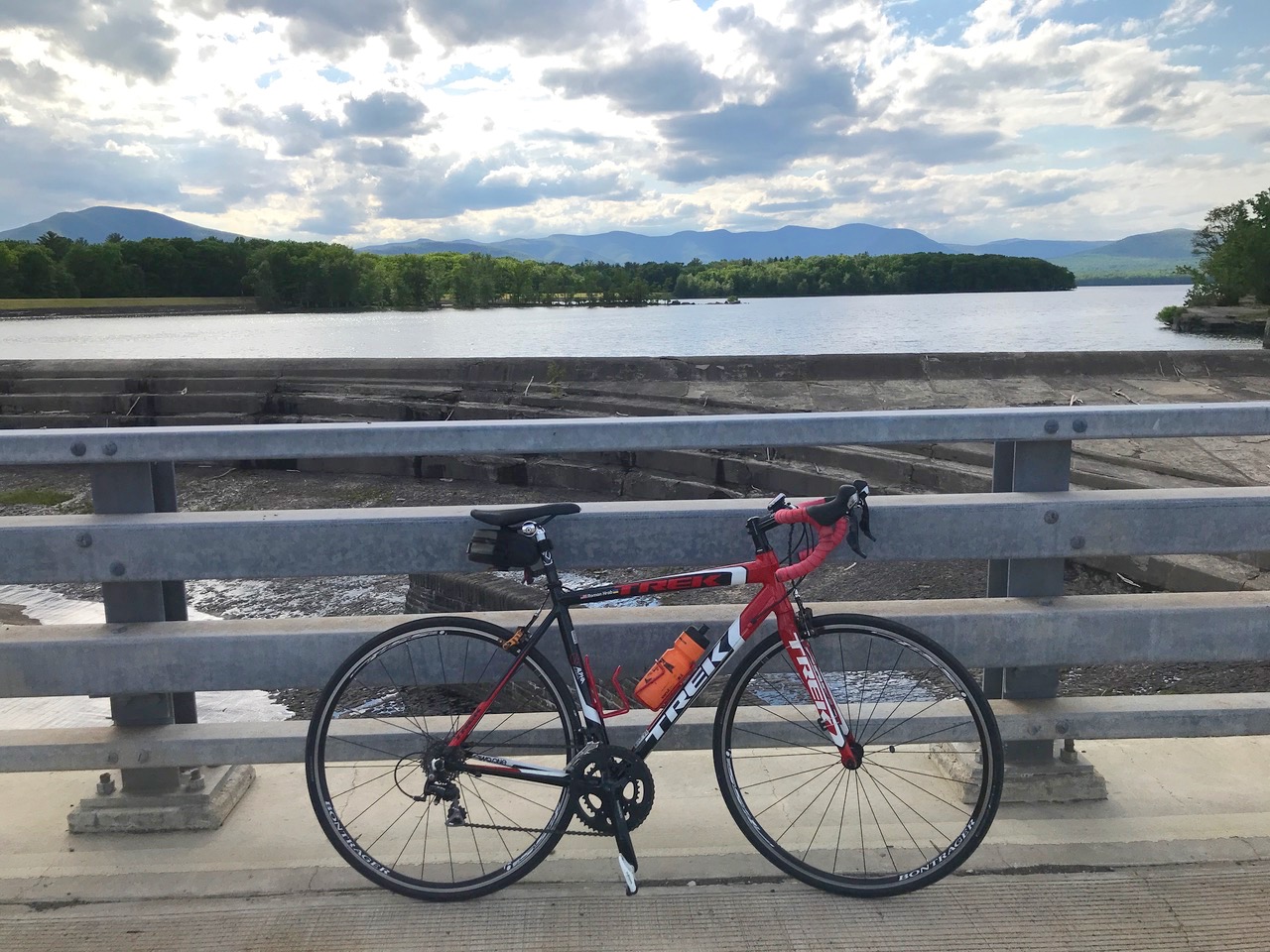 I headed down the final stretch, past a beautiful lily pond with barn swallows and red winged blackbirds flying past, rolling into my driveway in 1 hour 52 minutes, for a total of 24.5 miles and 1,598 feet in elevation gain.

This would have been a beautiful weekend for Ride the Ridge, with cool temps and bluebird skies all around. But I’m looking forward to the October ride, with fall foliage being an extra visual treat. Here’s hoping we get to roll en masse once again.