Taking a whole weekend off to ski this year was a rarity. I have a job that requires working on Saturdays, and you gotta take care of business. So when the opportunity came at mid-winter break, my family repaired to Lake Placid to ski Mount van Hoevenberg. 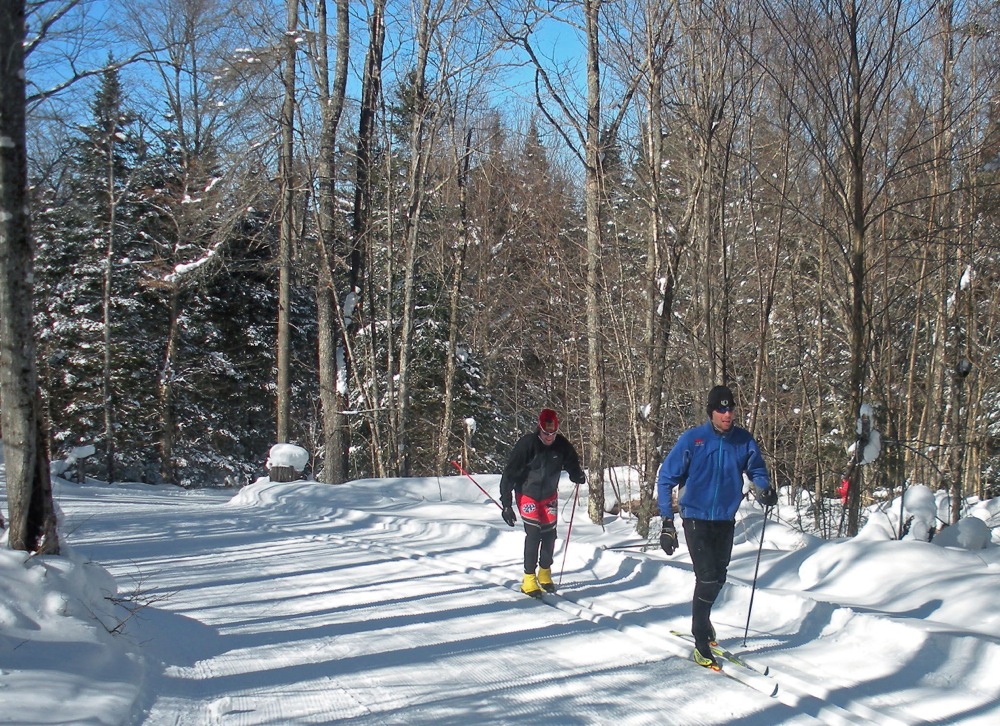 In 1982, I skied Mount van Hoevenberg for the first time. Still a novice, my friends were extolling the virtues of this place and we came up on a chilly January weekend.

The first trail we skied then was the Ladies 5k, so named because it was the route for the women’s 5 km relay event in the 1980 Olympics. Only one of the most difficult trails in the place. The lower part of the loop I managed without incident. But from the height of land, I basically fell all the way back down to the stadium. I was still figuring out how to turn going downhill.

The lodge was different than it is now. There were wax rooms in the building, across from the men’s room. I remember one of them had grip wax graffiti on the wall in a Scandinavian language. Now, the wax rooms are in a separate building and there’s a bar. The food service is vastly improved too. 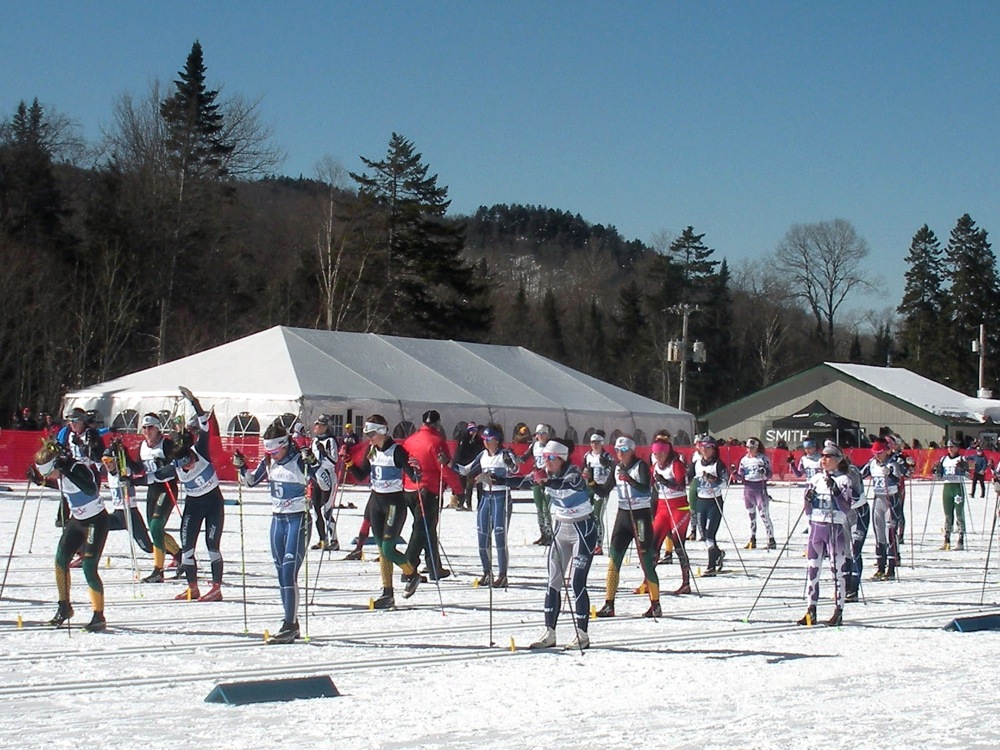 With the frigid weather of mid February, conditions weren’t fast. I corked kick wax on to our skis, and off we went. My daughter knocked off the East Mountain trail for the first time. The huge climb up Russian Hill is rewarded with a long descent. Squeaky slow snow was the perfect way to introduce her to a nasty drop.

What regulars refer to as the cross country side — with Porter Mountain, East Mountain, and Ladies’ 5 among others – seems designed purely to test one’s aerobic fitness, with stiff climbs followed by hairy descents. You gotta concentrate; no time to relax. On the biathlon side — the trails on the same side of the access road as the biathlon range — the climbs are may be shorter, but they’re no less forbidding. And the biathlon side trails are, in my mind, more technically challenging. 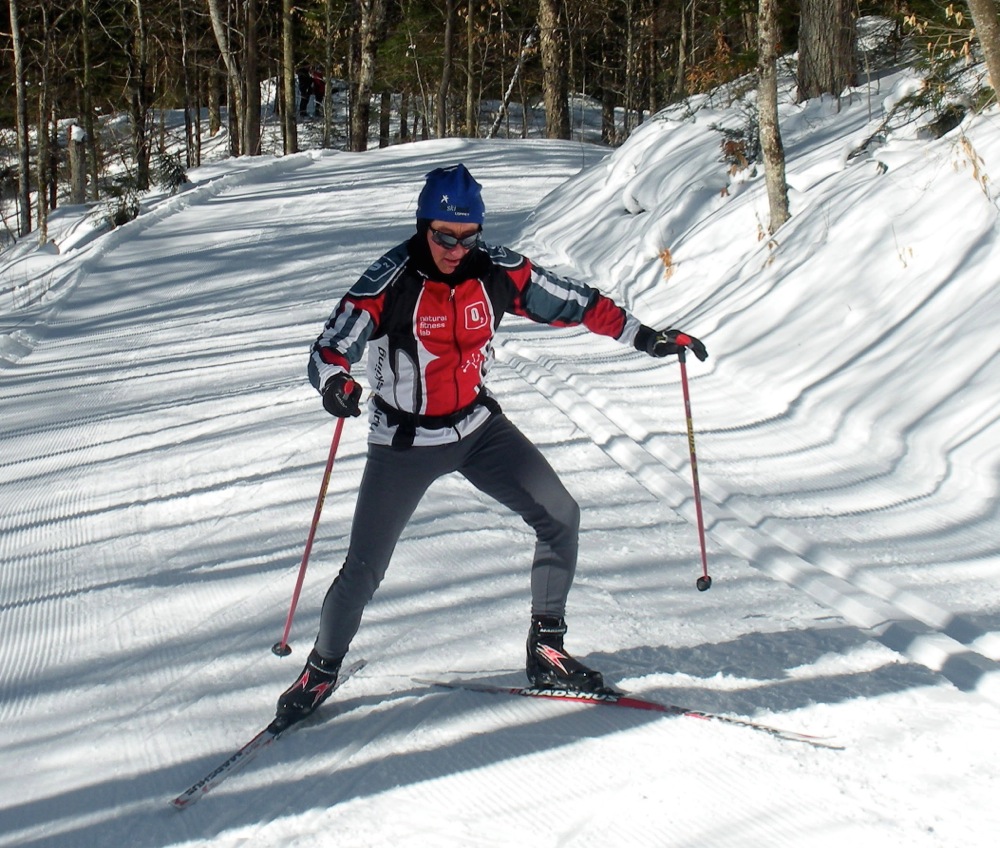 This year on Presidents’ Day weekend, the northeast was in the grip of the Polar Vortex. What better way to use my Swix Polar kick wax, which I last broke out in the late 1990s. With sharp crystals digging into your ski bases, everything was cold and slow.

Saturday was the warmest of our 4-day stay. On Saturday, I did an impromptu fartlek workout on hitting the hills on the beginning of Porter, Russian Hill and the upper section of Ladies 5. This was my third hard workout on snow since surgery in November. I had good sensations and the mesh the surgeon implanted to fix the hernia didn’t bother me.

On Sunday, it was so cold that my wife dropped me off at the lodge and took our daughter in to Lake Placid to hang out. So Sunday became my de facto overdistance day. Once I left the stadium, there was little wind. I was glad I chose to ski classic, because the tracks were faster than the skate lane. By the time I got out to Porter Mountain, I was warm enough to shed a layer. It was the wrong day to sweat. 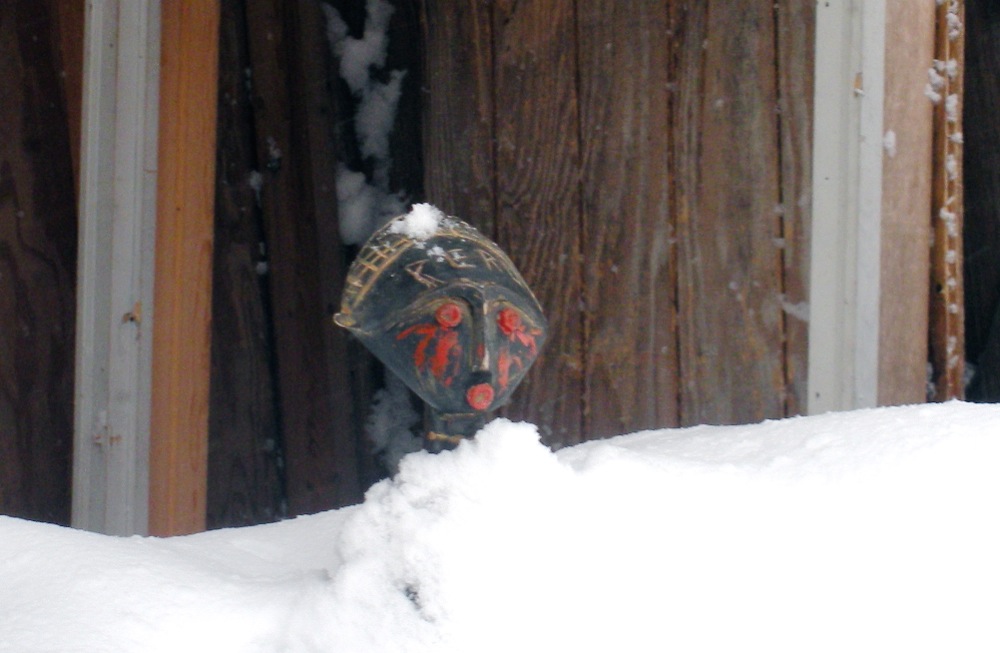 At the timing hut left over from the Olympics – the so called temple of the Goddess of Anaerobic Threshold – I put my jacket back on for the descent.

A year ago I was up for my club’s 10 k race at Dewey Mountain. That day, the snow was humid and greasy, the temperature a couple degrees above freezing. After an overnight freeze, I skied at Mount van Ho the next day. You were skiing on ice crystals rather than snow. The descent from the high point of Porter Mountain – the roller coaster hills – was insanely fast. You carried enough speed to get you over the top of the next little rise and descent.

It was leisurely and you could take in the scenery. Which was a good thing because I had to cover my nose with one gloved hand. After revisiting Russian Hill, I dropped back to the stadium and headed to the biathlon side. There are so many intersections here, that I still get turned around if I ski off one of the newer trails. 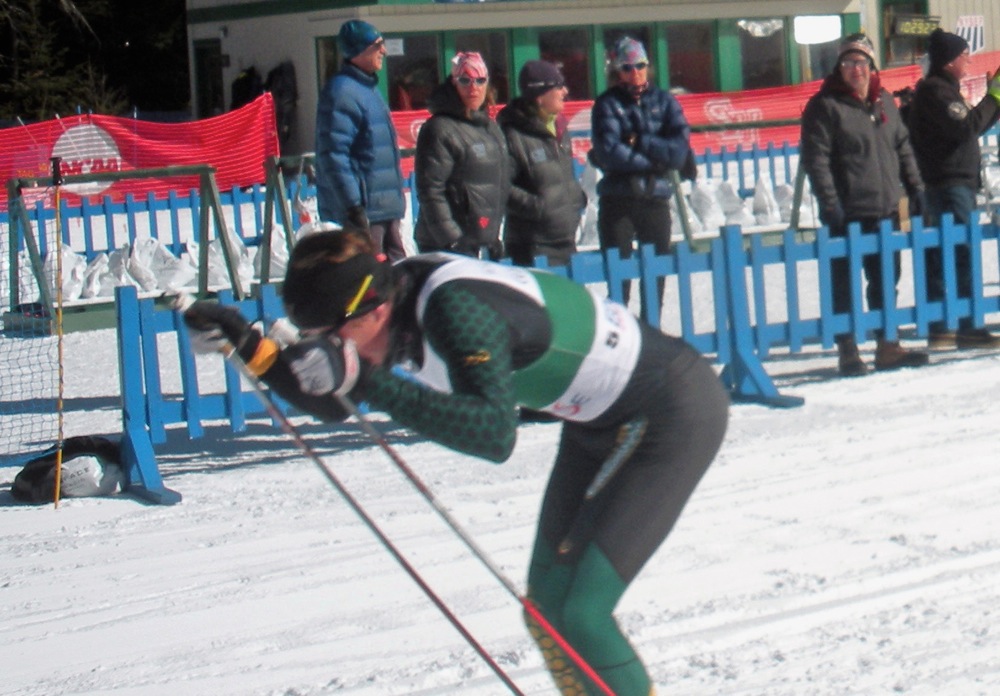 There are powder stashes at Mount van Hoevenberg, if you know where to find them. On our last day there, I hooked up with two of my Peru Nordic teammates to ski for an hour.

Coming off Russian Hill (again), I zigged left, then zagged right, following the Hand of Doom and the Harvester of Sorrow into a narrow, untracked chute that paralleled Main Street, the wide open downhill leading to the stadium.

Nothing like the glades up at Gore or the Slides at Whiteface, but just enough to whet the appetite of a confirmed groomed-track cross country skier. But it was just right for your correspondent, whose backcountry skills are still in development. The chute dumped us out into the bottom of Main Street, and we double poled through the stadium onto the Brookside trail. 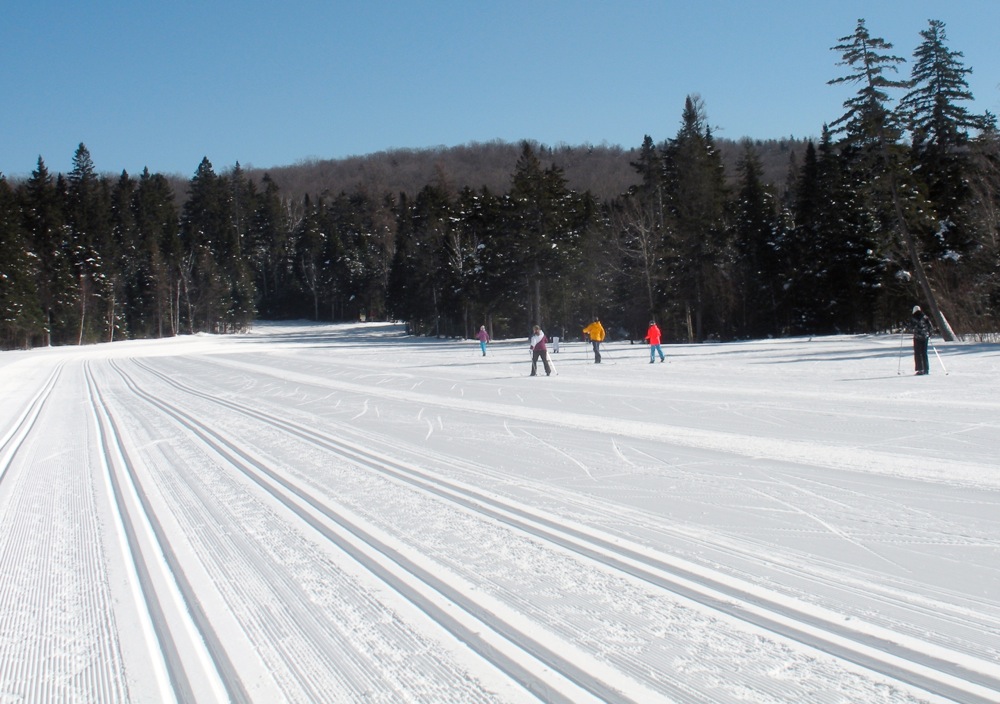 Up the little grunt past the tunnel, heading towards Thumb Hill. My friends nicknamed this descent after I faceplanted and dislocated my thumb on an icy day here in the early 1990s. But instead of taking Thumb Hill, we detoured right, through an unmarked, ungroomed, and unnamed pine glade, to the foot of the hill before setting off on the Deer Run trail.

We stayed late to get the most out of the day before the long trek home. And I’ll be headed back, sooner than you know. Even though I live in the flatlands, I count van Ho as one of my home mountains. As many times as I’ve skied here, I never get tired of it.