Bear Mountain State Park is another cool place with a lot of history, including some of New York’s early ski history. But it also attracts so many people every summer weekend that the heavy traffic can make it difficult to get around northern Rockland County, to take advantage of the hiking, paddling and swimming opportunities the park offers. 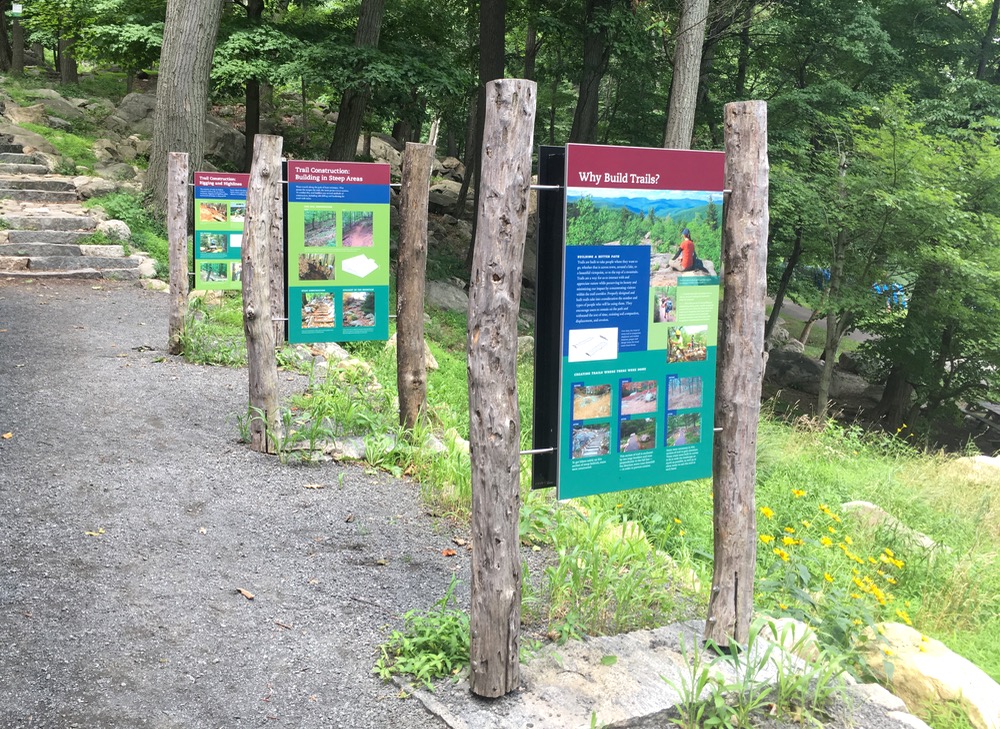 It can be disheartening. It’s not just because the crowds and traffic make access difficult, but also the impact all those people have in terms of litter, erosion, noise pollution. The crowds at Harriman and Bear redefine the term “intensive use.” On a normal summer weekend, I definitely avoid Bear Mountain.

The area is part of NY history. Hessian Lake got its name because dead German mercenaries were thrown in after a minor Revolutionary War battle nearby. If that sounds grim, keep in mind that it used to be called Bloody Lake. 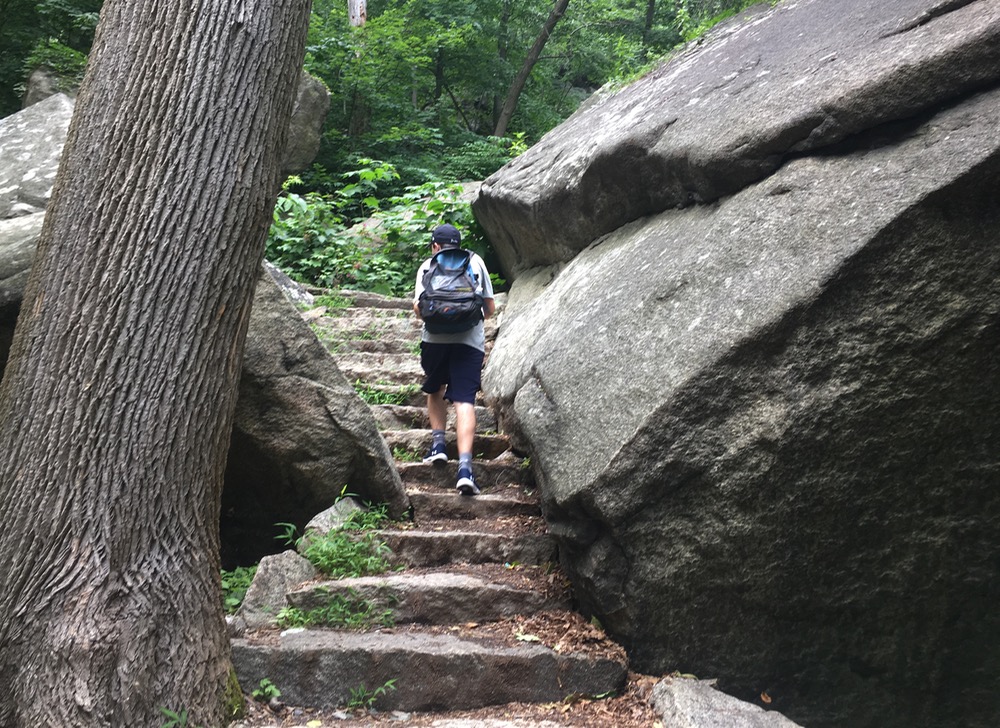 The mountain itself is unique, and interesting to skiers. In the early days — before alpine skiing and chairlifts and snowmaking — ski-jumping was a big deal. Before people started locking down their heels and racing downhill, all skiing was nordic.

In the 1920s, Before it was an Olympic sport, ski jumping was a big part of recreational skiing. In 1928, the sport was popular enough that New York built a jump on the side of Bear Mountain. Thousands of people would show up to watch the jumping at Bear. As late as the 90s — the first time I climbed Bear Mountain — the jump was still in the woods. It may still be. I don’t know; the trail was rerouted away from its location and greatly improved at some point. 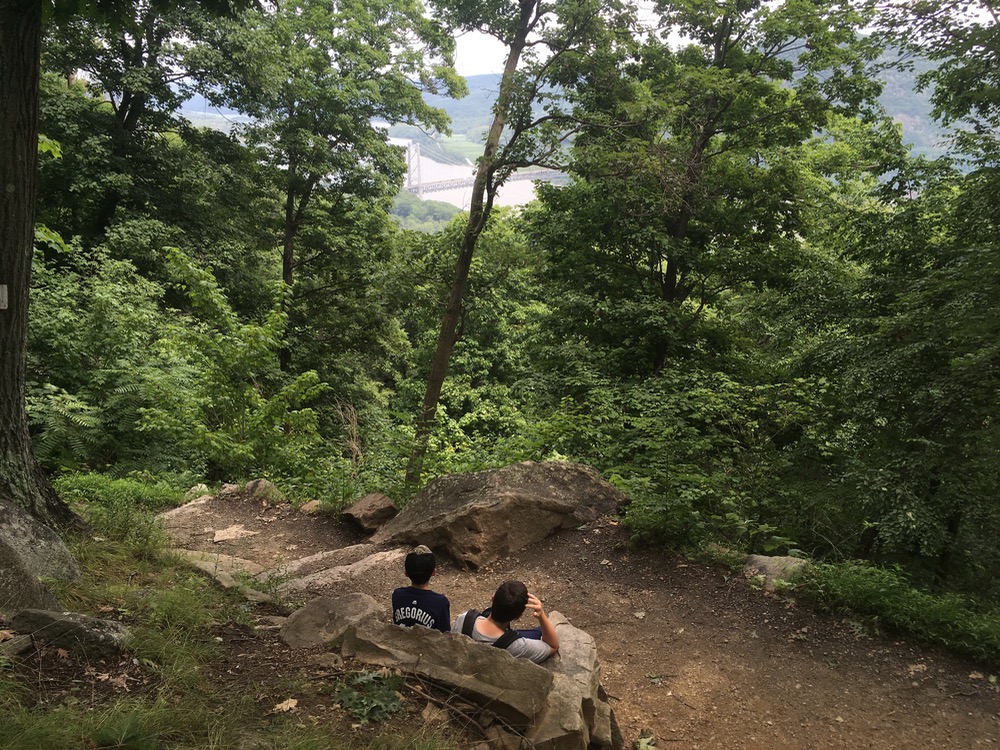 With that in mind, I recently had the chance to take my kids hiking at Bear Mountain on a weekday. With a rare opportunity to utilize the little bit of nature out our back door. We parked at Bear Mountain Inn next to Hessian Lake, an impossible task at 10am on a Saturday. On weekends, picnickers fill the lot and then park up and down both sides of Route 9W, making access problematic.

We made our way to the Appalachian Trail (AT) and I could see that the NY/NJ Trail Conference had done a lot of work. What I didn’t expect, but was very happy to see, was a series of big informational signs alongside about trail maintenance. Our little hike turned into an educational seminar on trail building for my kids as we stopped to read for a little while. 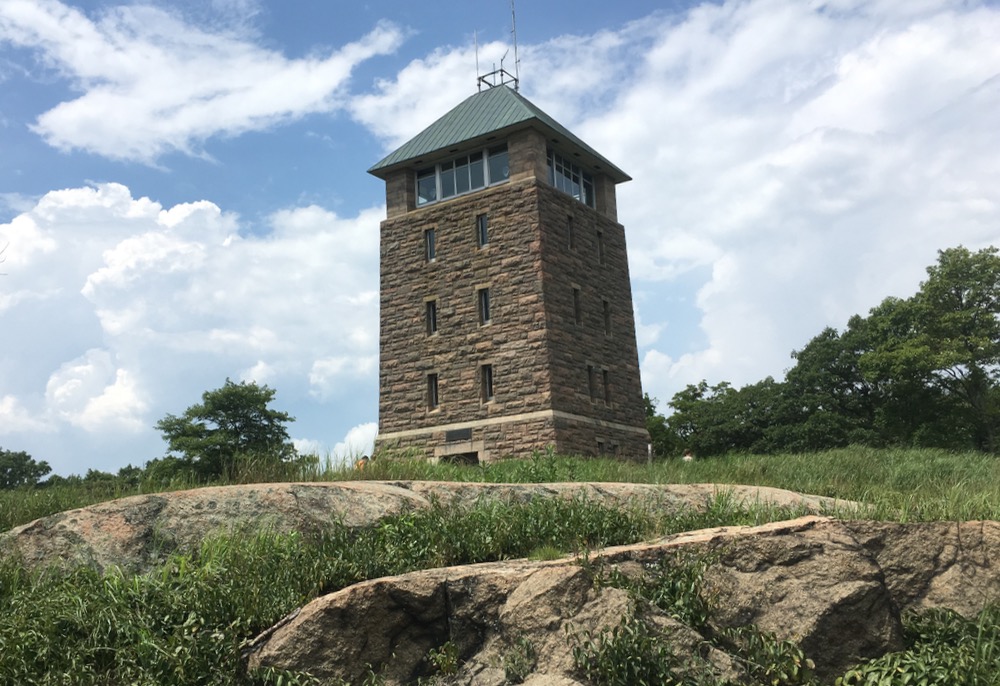 Apart from general information about the park’s history, conservation efforts and the importance of staying on the trail, there were placards explaining the different features which trail crews employed. Corduroy, bog bridges, crib walls and puncheons are all explained in detail.

As we started following the AT up Bear, the efforts of the trail crews quickly became apparent. There were examples of crib walls, various bridges and other features were in evidence. What was most amazing to us was the series of stone staircases which had been installed on the steeper sections. 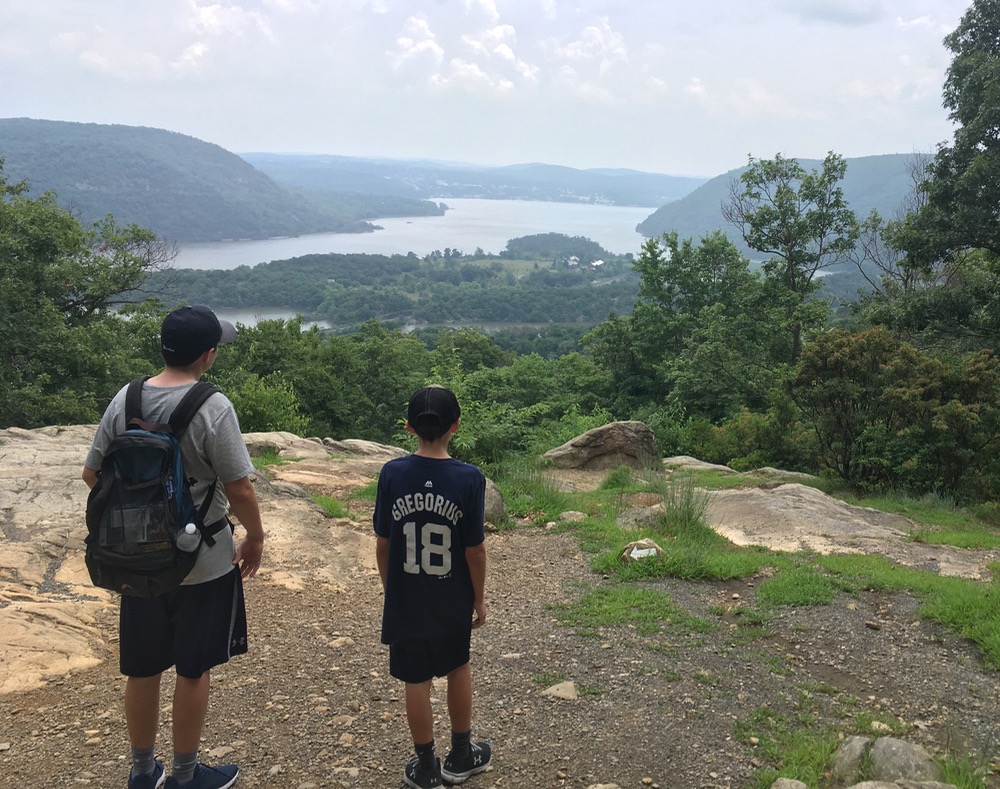 The sheer amount of brute force labor required to get so many stones into place was beyond impressive. I continued talking to my kids about all the work that goes into maintaining a heavily used hiking trail like this. They did seem impressed but soon we were absorbed with putting one foot in front of the other as we climbed up the mountain.

Even on a weekday, there were lots of people on the trail, including a handful of thru-hikers. My kids already knew all about the AT but were happy to learn that the part we were hiking was the first section of the trail to open in 1923, even before the ski jump was built. 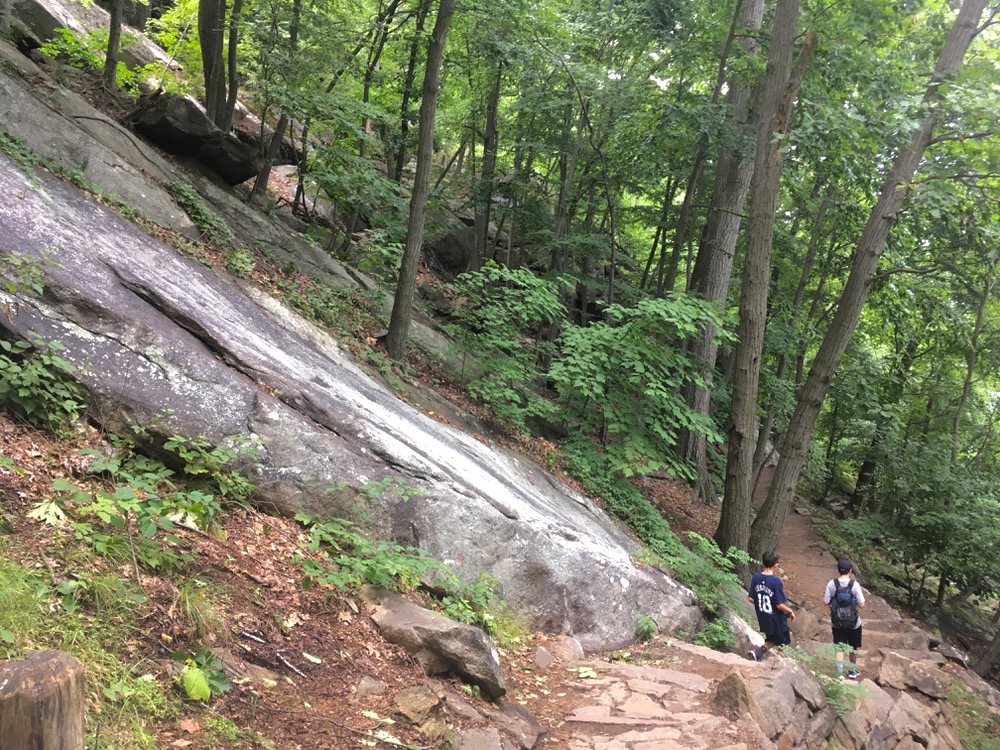 It’s a steep climb with a thousand feet of vertical. Junior pushed hard and made good time but my younger son had to work hard to keep up. The heavily engineered part of the trail went almost all the way up to where it crossed Perkins Memorial Drive. Near the top it followed an unused section of the road for a little while.

Where it turned off the road again we bumped into Glen, a real live trail crew volunteer from the NY/NJ Trail Conference. After our lesson about trail maintenance at the bottom of the hill, meeting Glen was quite the happy coincidence. We thanked him for putting in the time and work to keep the trail nice and then pushed on up towards the summit. 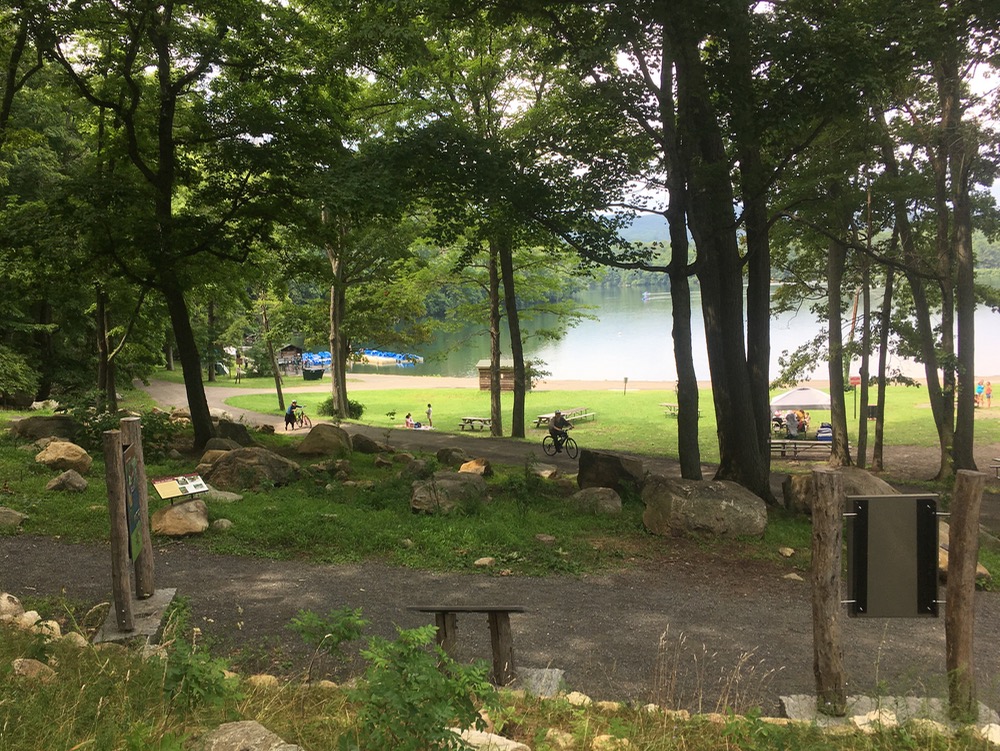 Perkins Memorial Drive goes to the top where there’s a stone observation tower. I sometimes feel that reaching it is a little anti-climactic. There were a bunch of folks wandering around the summit area. I reminded myself that the joy of hiking is the journey, not the destination and went to try the door to the tower. It was locked of course, just as it had been every other time I’d come here.

It took a bit less than two hours to reach the top and a lot less to get back down. I encouraged the boys to control their speed because injuries occur on the way down. The stairs do make for an easier descent. The boys bounded along, happy to have the hard part behind them. We offered encouragement to those on the way up and were back at the car in less then three hours round trip.