It was cold this morning, for December. The cabin’s weather station is out of commission, but the CRV has an exterior temp gauge that showed 13 degrees F when I started the car at 7:15 am. It’s usually reads a few degrees warm, so let’s say it was 10F. Down in the river valley at 1000′ it was even colder, I’m estimating about 5F. When I got to the mountain at 7:45 there were maybe 50 cars in the lot. The Gondi started loading “on time” at 8:30. 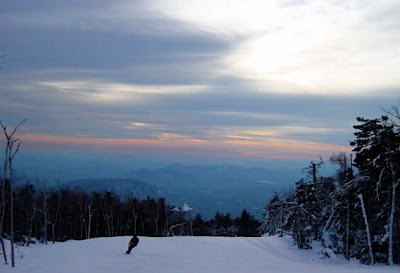 The trail report showed 4 lifts and 14 trails. Basically there were 4 or 5 distinct runs depending on how you count. Since last weekend, Foxlair had been added. On my first run, Topridge and Pine Knot were still roped off so I headed for the bottom on Foxlair. It was pretty, but also pretty firm, and not very well farmed.

Editors NOTE: Anyone who’s been following NYSB since last season knows that I’ve had camera issues. I thought they’d been resolved, but apparently the Sony is only working in warmer temperatures. The shot above is the only one I was able to salvage from today. It looks like we’re going to need an infusion of cash to invest in infrastructure…camera, weather station, and quite possibly some other stuff. More on that other stuff later.

Once I got down onto Sunway and Quicksilver, they were much nicer, much softer than Foxlair. On my second run, I took Sunway, past Quicksilver down to 3B, which was also soft and carvable. With everyone heading down on Quicksilver I was able to cut huge GS turns on Lower Sunway …something you can get away with this early in the season and early in the day. On my third run, the rope was down on Topridge. It was about like Foxlair really very firm. I hit Topridge three times all day…the third time it must have been up to 20 degrees and in direct sun, but still not much to carve.

Pine Knot to Tannery was the pick of the day. Lots of loose soft manmade on top. That great silky stuff that you get when you make snow at 10 degrees. Pine Knot had corduroy that quickly turned into loose silk. Tannery was ungroomed whales on its upper half. Great for carving. Eventually they opened Upper Showcase to Lower Sleighride to Wildair to Stokes. It was a mismash of death cookies, silky snowmaking whales, hard pack and soft bumps. It was actually kinda fun, but it did seem like an accident waiting to happen. Snowmaking Note: The website said they’d have guns on Hawkeye, Cloud and Headwaters…a logical plan. But I only saw guns on Headwaters.

At 11:15, the camera had stopped functioning completely. I went into the saddle lodge, had a cliff bar and tried to warm it up to see if that would help. Nada. I did two more laps on Pine Knot/Tannery… and than ran the gauntlet to the bottom on Showcase etc…and called it a day at 12:45.

Then I did a bad thing… or a good thing… depending on whether or not you put more value on executive compensation or fiscal responsibility. I drove to Inside Edge in Glens Falls and somehow came back with THESE BAD BOYS:

Since I didn’t even really have the money for the skis…the bindings and the boots I need to drive them…well I may have to ask congress for help. Otherwise, I may be out of business before year end.

It looks like the NWS has pushed the bulk of the overnight snow to tomorrow, so not sure how much of that I’ll be getting tomorrow morning. I’ll get what I can, head back to NJ to decorate the Christmas tree, and then report back.