Another tough day at the office. Temps were warmer and wind speeds were almost nil. So comfort was most improved. And considering the bulletproof conditions from yesterday, Gore did a reasonable job with what they had. 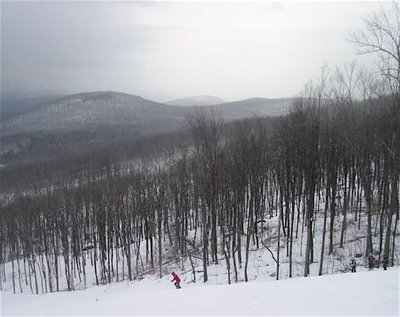 Common areas (Base, Saddle, Summit of Bear) were covered. But Gore will never be Okemo or Killington. There just isn’t the horsepower to recover from major NCP events the way the Vermont titans can.

For some reason snowmaking continued on Twister…which was pick of the day. They were blowing on Pine Knot, which I do understand. Blowing on Uncas? It’s not open and probably won’t be until after the holiday is over. How about Showcase, or something on the Dark Side?

If Gore was a Vermont resort, I guess it would be in Vermont. Best trail conditions were on Twister (by far), Lower Chatiemac, Pine Knot, Echo. Highlight of the day was meeting a really cool couple from NYC in the Tannery Lounge. In all my years at Gore…I have never had a beer in there.

Today was also my 2 year old daughter’s first run on skis. She liked it and asked all day when she could go again. To me that is big stuff. See you tomorrow.