Over the past few days, my favorite wildflower, the Wild Rose — the Multiflora Rose — has exploded across the New Jersey landscape.

According to American Meadows: “The botanical term for wild rose is ‘species rose’, which means just what it says — a species that occurs naturally, with no help from man — a true wildflower. There are over 100 of these worldwide, some native to North America, many from the Orient and Europe.”

With their trademark five white petals, Wild Roses are virtually everywhere: in the middle of forests, along the sides of highways and roads, next to ponds and streams. Even if you have a blindfold on, they’re tough to miss. 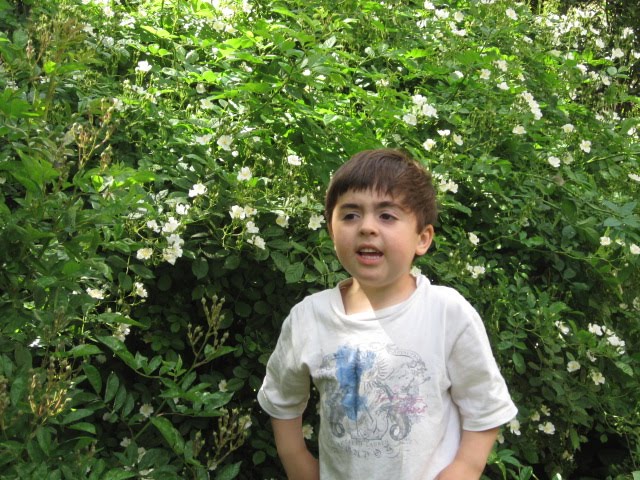 They have the most intoxicating, beguiling, and alluring aroma ever — like that of a hybrid rose, but sweeter and much much stronger. If it were a food, I would eat it. If it were a woman, I would marry it.

Here’s Claude inhaling the delicate bouquet of the bush in our side yard. The red ones (to the looker’s left) bloom about three weeks later. They’re visually more beautiful, but don’t have quite as powerful a scent as the white roses.