“Burke? Where is that? Oh that is sooooooo far away!”

Or maybe it goes like this… “Burke? I think I heard it is a small mountain that is waaaayyyy up in Vermont somewhere.”

If you are a Burke regular you’ve likely run out of appendages counting how many times you’ve heard these expressions when talking to someone about Burke.

Burke is closer time or mileage wise to both Hartford and Boston than Stowe, Smuggler’s Notch, Sugarbush, Jay Peak, and Sunday River. It is all Interstate highway except for the last 7 miles.

Burke is not small and it is not big. It has a full 2000+ foot vertical drop and 270 acres. That 270 acre figure does not include a vast array of off the map glades. The total area within the boundary ropes is over 500 acres. Burke has a layout that is very family friendly.

The Lower Mountain is served by the Sherburne Express HSQ and offers 580 vertical feet consisting of 5 beginner trails and 2 glades. Burke’s main terrain park, Dashney Mile, and the main base lodge are also located here. Two surface lifts, a short carpet and a J-Bar, service the beginner area right near the base lodge. This entire pod is great for beginners since it has a fairly low pitch which results in the higher speed expert skiers/riders generally avoiding it, allowing for a relaxing place to learn. The Enchanted Forest glade is a great place to get comfortable skiing through trees, which is an excellent ability to have for any skiers/riders working toward advancing to the upper mountain.

The Upper Mountain starts at the Mid Burke Lodge and is accessed from long overdue Mid-Burke Express HSQ. The Mid-Burke Express (MBE) gets you to the summit in about 8 minutes. An older fixed grip quad also serves the summit and is used as a back-up lift or can be brought online if things get too “crowded”. The historic high speed Poma surface lift serves the central part of the upper mountain. This lift is primarily used by Burke Mountain Academy and other racing organizations that use Warren’s Way trail (aka “The Training Hill”) for Slalom and Giant Slalom race courses. You can get a great view of potential future Olympians smashing through the gates from the MBE.

Many of Burke’s upper mountain trails pull off a rare and special balance of having those interesting undulations while maintaining a relatively consistent pitch to the bottom (i.e. no major flat spots, and limited runouts at the bottom getting back to the lift). This balance of character makes Burke a lot of fun to ski. You can’t see the bottom of the trail from the top.

One of Burke’s more famous trails is East Bowl. This trail requires a traverse around to the remote eastern edge of the resort’s boundary. Typically ungroomed, this trail is the pinnacle of the undulating character described above. Skiing this trail at speed is often likened to a rollercoaster. However, it does break the long flat run out rule due it going so far around the side of the mountain.

The upper mountain is also home to the majority of Burke’s glades. Burke’s glades are a lot of fun. The eastside glades (Sasquatch, Throbulator, and Caveman) typically fill in first. Westside glades (Birches and Jungle) fill in last and everything in between is well… in between. Each glade has a unique character but maintain that fun undulating quality. There are also many unmarked stashes in the trees. So don’t be afraid to talk to people riding the lift with you, they may take you somewhere really fun. 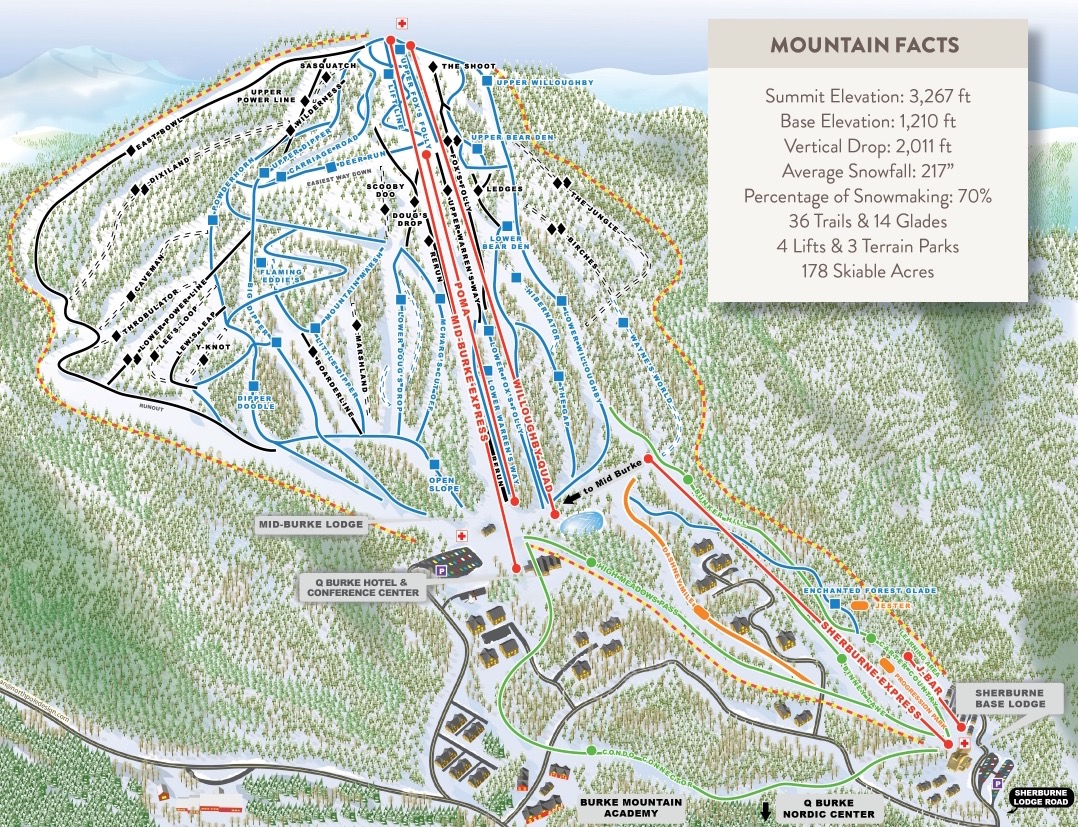