Overlooking the Otisco Valley, Song Mountain is located 30 minutes south of Syracuse, just off I-81 in Tully, NY. The ski resort has been open since 1964 and joined operations with nearby Labrador Mountain in 2014. The two mountains offer a joint season pass.

Central New York has its benefits and Song is often the recipient of early season lake effect snow. The mountain averages 125” of snow a year and with 75% of the mountain covered by snowmaking coverage is usually very good.

A vertical drop of 700 feet is spread across 1oo acres of skiable terrain, with 75% lit for night skiing. There are 24 trails in total, half beginner and the other half intermediate to advanced including a terrain park.

The base area is spread out with the majority of the lifts centrally located. Getting off lifts C, D or E you will catch a view of the southern tip of Otisco Lake. Take skiers left towards the lake to find blue cruisers like Stardust or meandering greens like the wide open Meadows.

Song faces northeast and holds snow longer than some of its neighbors. There are some nice winding trails. Below the main lifts skiers will find long black diamonds that stretch the full vertical of the mountain. To skier’s right there are more blues and greens until you make your way to Lift A.

Off the Tbar is some of the most challenging terrain at Song. The steepest trails are Otto’s (22 degrees) and Jupiter (28 degrees) and they have consistent pitch the length of the trail. Jupiter is often lined with moguls. You will often see local athletes punching the gates down these steep runs on weekends. Beyond Jupiter is some steep tree skiing (30+ degrees).

Song Mountain has a base lodge, cafeteria, restaurant, training center and rental shop. Song is also home to the Thunderbird club, a social club with a lodge at the base. For those without a membership head to Moguls bar and restaurant downstairs in the main lodge. Here you will often find local bands rocking out with cold beer and great food.

Song is famous for their Friday Night Freakout deal, offering $9 night tickets. It’s a lively atmosphere and is one of the best deals in skiing. You may also catch a beautiful sunset over Otisco Lake.

by Robert and JohnF 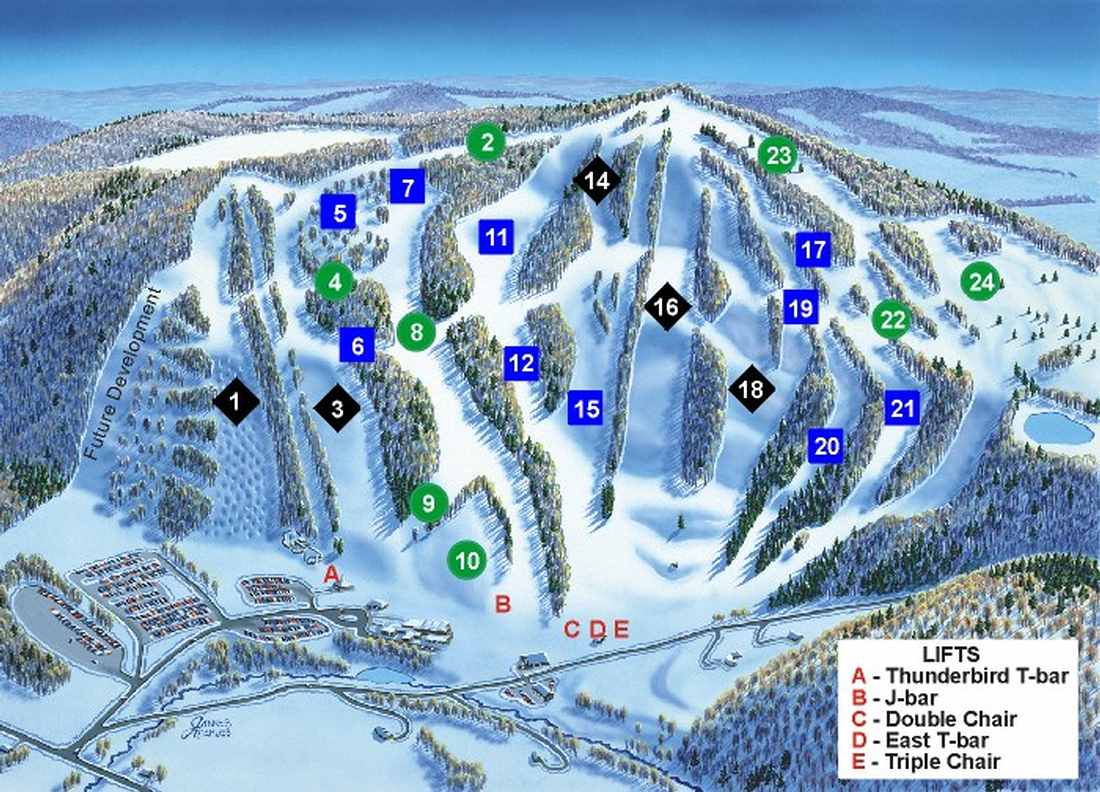