Woodstream Ski Area is located in the northern foothills of the Catskill mountains, in the town of Oneonta NY. It is the creation of an enterprising young man that we know as Ethan Snow. He’s acted as designer, builder and manager for the facility with the help of a few volunteers. Woodstream bridges the gap between “backyard sledding hill” and a full-on ski resort experience.

In 2011, Ethan developed his first ski trail, and a 300’ rope tow on his families’ hillside property. In 2014, the length of the rope tow was extended to 800’ maximizing the skiable acres of the hillside. Now Woodstream boasts 168 vertical feet, 7 trails, a high-speed rope tow, and new for 2016 – an integrated off-the-grid snowmaking system capable of covering all trails on the skiers left. The system includes a 100K gallon pond, 2 high pressure water pumps, a 5 HP industrial air compressor, three homemade snow guns, and 1000’ of 1” schedule 80 pipe.

On the skiers right, is Woodstream’s longest run, “Big Blue” which is a partially gladed old-school trail. The trail is rated intermediate and has natural snow conditions only. This section of the hill is shaded, and holds snow well. Big Blue is arguably the most fun slope at Woodstream.

On the skiers left are the steepest run “Porcupine Plunge” the most gentle “Upper, and Lower Susky.” Porcupine Plunge is the prelude to the Red Dragon Terrain Park which often boasts very large features such as jumps, and rails/boxes for snowboarders. Porcupine Plunge, Upper/Lower Susky, and the terrain park, are plumbed for snowmaking, and also have lights for night skiing.

Although Woodstream is not open to the public, it has been used extensively by friends and family for a variety of recreational, and social events centered around skiing and snowboarding. 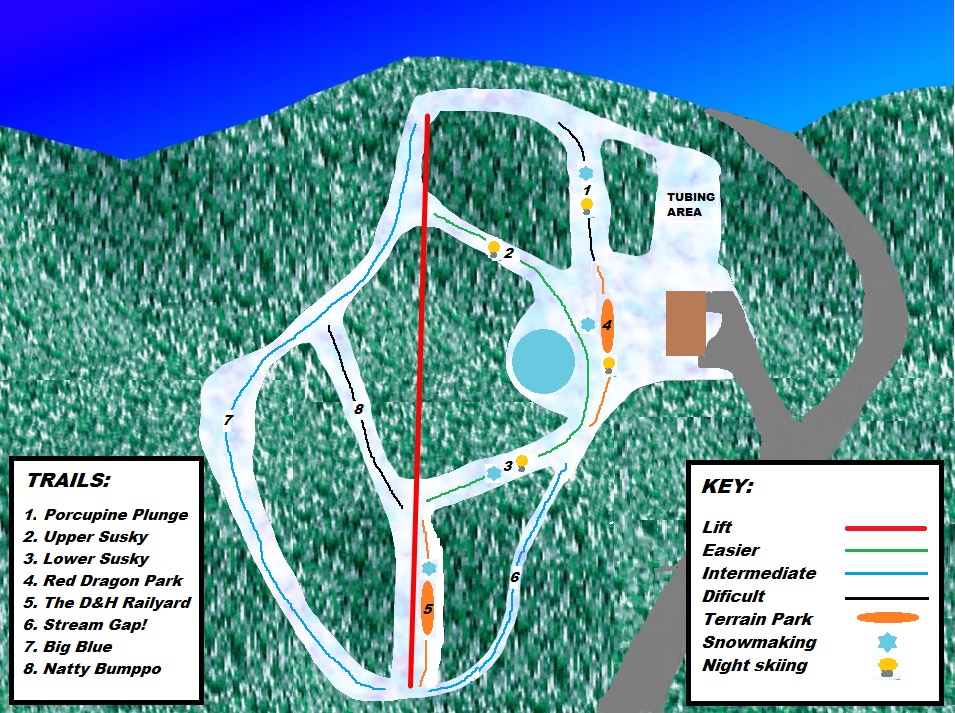