Over the past few years, we’ve published several features in the Magazine about the most underutilized arrow in the northeastern skier’s quiver: Québec.

From the Eastern Townships and Laurentians in the south to Charlevoix and the Gaspé Peninsula in the north, the province offers a number of great mountains, but its special sauce is the many interesting small areas similar to Hickory in the Adirondacks or Plattekill in the Catskills.

With the 2013-14 season inching closer, we learned over the past week that one of the most beloved of these locals’ hills, Mont Alta — located an hour northwest of Montréal in the Laurentian snowbelt — is going to reopen after being closed last season, with the goal of transforming it into a co-op. 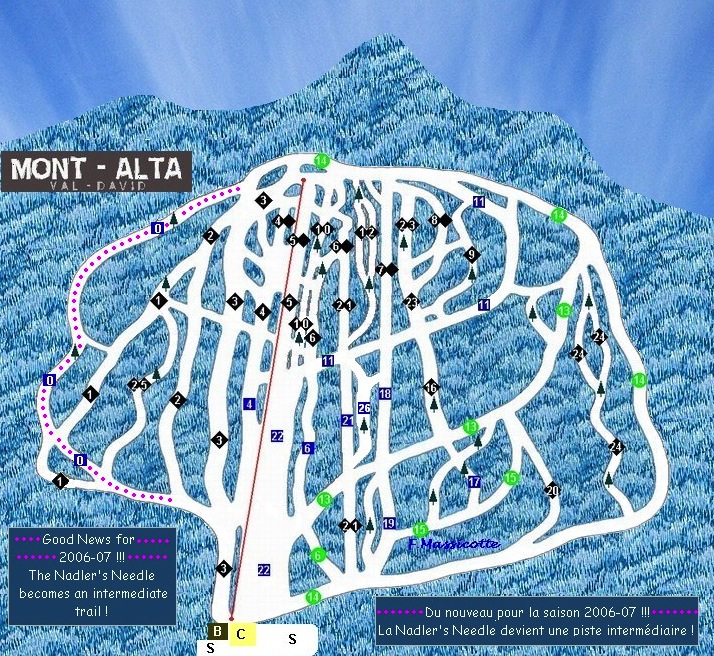 It’s the latest example of skiers concerned about losing a favorite no-nonsense ski area to the vagaries of capitalism — including Vermont’s Magic Mountain, Maine’s Mount Abram, Québec’s Mont Orignal and Valinouët, and, of course, the most renowned of all nonprofit mountains, Mad River Glen — and taking control of their communal ski destinies.

What’s interesting about this particular case is not simply that skiers have banded together to save a lift-served mountain, but rather that the entire effort has been driven through the French-Canadian website ZoneSki, which, for more than a decade, has made a point of encouraging Quebeckers to visit the province’s many off-the-beaten-path ski areas.

In fact, the main reason that I became aware of and eventually visited such entertaining under-the-radar hills as Mont Shefford and Mont Glen (RIP), La Réserve, Massif du Sud, Mont Édouard, and Mont Grand-Fonds was thanks to the many enthusiastic trip reports I’d read there.

The fervor of the words was in direct opposition to the height of the mountain (600 vertical feet); in fact, they had an almost reverential tone, very similar to the way that I praised the Catskills’ late, lamented throwback mountain, Bobcat.

Fast forward to the beginning of September when ZoneSki founder and president Christophe Deschamps posted an editorial call to arms: What If We Bought Back Mont Alta? — challenging people to contribute their money, time, and expertise to help reopen the mountain.

The article seemed to accomplish its goal as last weekend, more than 50 volunteers arrived with hedge clippers, weed eaters, chain saws, and other tools to get the trails, glades, chairlift, and parking lots ready for the upcoming winter.

Although a fair amount of work remains to prepare Mont Alta’s terrain and infrastructure for the upcoming season and then to raise the money to purchase it from the current owner, there’s an unmistakable feeling of momentum behind the project.

Over the years, I’ve seen several ski forums ask the same question that Deschamps did a few weeks ago — “what can we do to save a unique mountain that’s in danger of closing for good?” ZoneSki appears to be the first existing website that has stepped in to give a revered ski area a new lease on life.

9 comments on “The Rebirth of Mont Alta Ski Area”