While the rest of the world has experienced a collective Groundhog Day over the past 15 months of Covid lockdowns, I’ve had an identity crisis of a different variety. I’m living in Quebec and I wonder, am I a climber posing as a skier, or a skier posing as a climber? And, is it silly to define yourself as either in a place where you can’t practice either for the majority of the year? Would it make more sense to simply play video games? Every day must be a pow day if you live to fire up the Playstation. 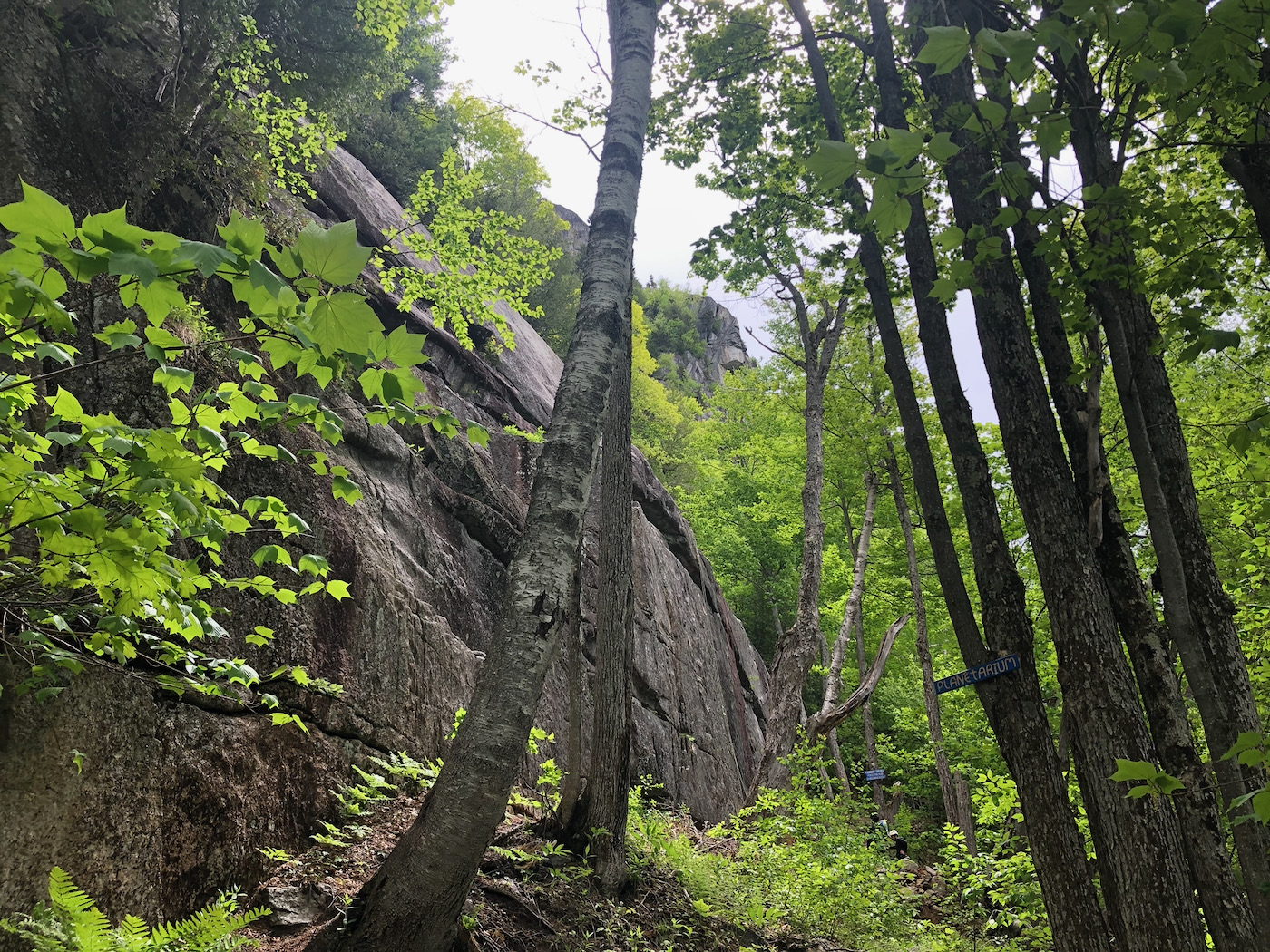 These thoughts rolled through my head as the wheels turned putting Montreal in the rearview. We were on the way to tick Camay, a classic 5.6 multi-pitch on Mont Pinacle.

Despite the pedestrian grade, I remember looking up the tower of granite on my last visit five years ago and not being able to figure out if it was too intimidating to lead or so beautiful that I wanted to dedicate years of my life to writing a guidebook about it. The anticipation made my mind wander.

In the passenger seat was a young climber I met last summer who offered a belay, saving me from the tediousness of a day of top rope soloing. Climbers are good people and the sport has taken me to beautiful spots. I used the promise of a spot like this to lure my partner into a second date. I caught a view of the cliff, and I was filled with joy seeing the landscape again. 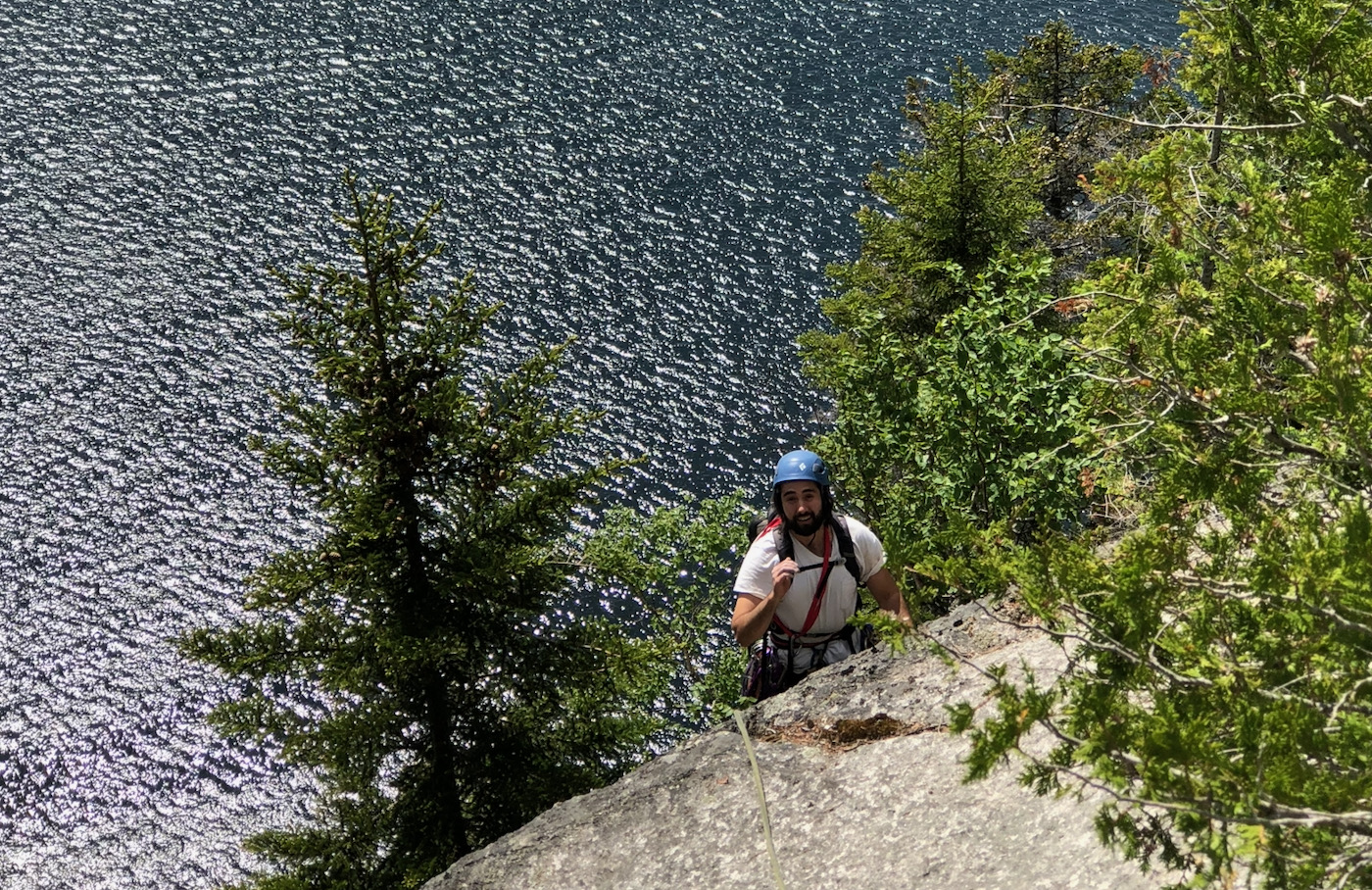 The terrain in the Cantons de l’Est is something special, a land that time has forgotten, just far enough from the cities or major attractions to have been ‘ruined’ like so many other outdoor meccas. Some of these towns were originally settled during the Civil War, by Americans that didn’t want to be a part of trouncing racist traitors and preferred to be left alone. As for the cliff, it may have felt the same way but with new routes being added all of the time by an enthusiastic new generation out of Sherbrooke, the cat is out of the bag on next generation projects and the classics.

Camay starts in a blocky corner that begs for your biggest slung hexes, and people do it in as many as four pitches but I am hoping for two. If memory serves, there is a short pitch of 5.4 to a big ledge, followed by a wandering old school 5.5 to a bolted anchor. From here the business really starts and you can take it in. If you can relax on the anchor perched above the perfect waters of the lake, you notice the hills stretching towards the border and Jay Peak, the farms, innumerable maples, and the two most iconic features of the cliff. To the right is the corner that houses the famous winter route, Gringalet, and to the left the dihedral of my target, Camay.

We caught up and go over a few things before I stepped out on the featured but sparsely protected granite. I sunk my fist easily into the crack and pull out a number four cam. Will I try to jam my way up, or lay back with no more finesse than when I started climbing more than ten years ago? The truth is, it didn’t matter, and that is the beauty of a long trad climb like this. To be lost in a moment, in a lost land, is to maybe find yourself for a minute in the present. 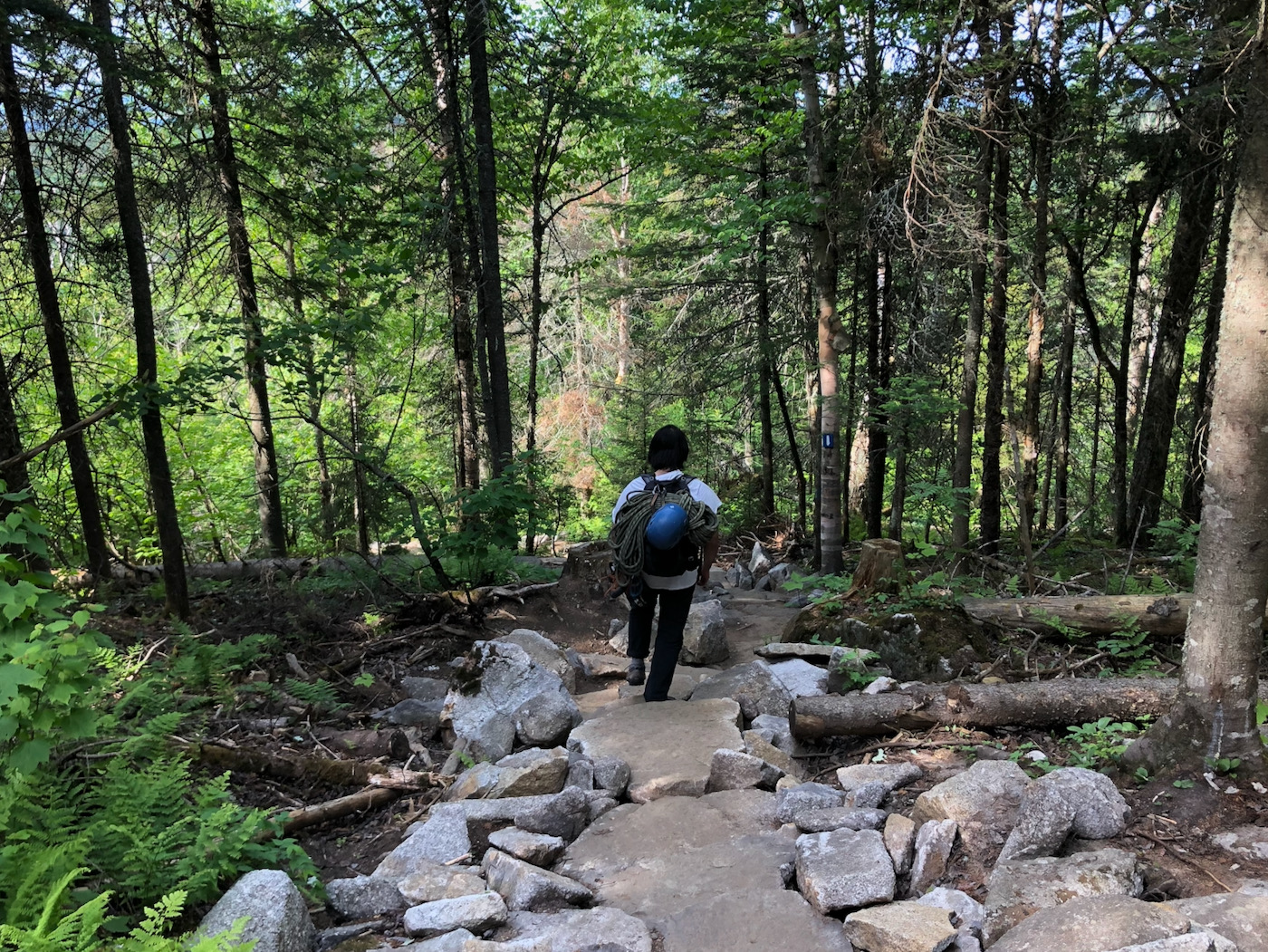 As I was already fighting rope drag, I brought my partner to the first belay. I had a feeling that we were in for a long day with a few clouds moving faster than us, but he was all smiles. The second pitch up the face is less memorable. The climbing isn’t hard, but again I find it a little hard to get protection in. I moved past an old piton that I was happy to clip into, but played it pretty cool as I brought my follower up to the next anchor. The smile on his face for his first multi-pitch made my day as much as the climbing.

We somehow caught up to a group of three beginners that had started before us. More than that, we were starting to get spit on by the sky. I didn’t mind coming back out here to this beautiful place, but I wanted to get this box checked. That said, I knew that this was an old school kind of PG, and that gear could be hard on the crux, never mind getting up wet rock.

The rain passed as the other group made it out of sight, to the left of the great corner, which is the only thing I could think about. High E might have “the move”, but this dihedral just seemed so daunting. I didn’t want to show any fear to my partner, so we moved the belay to a better stance and I went for it. 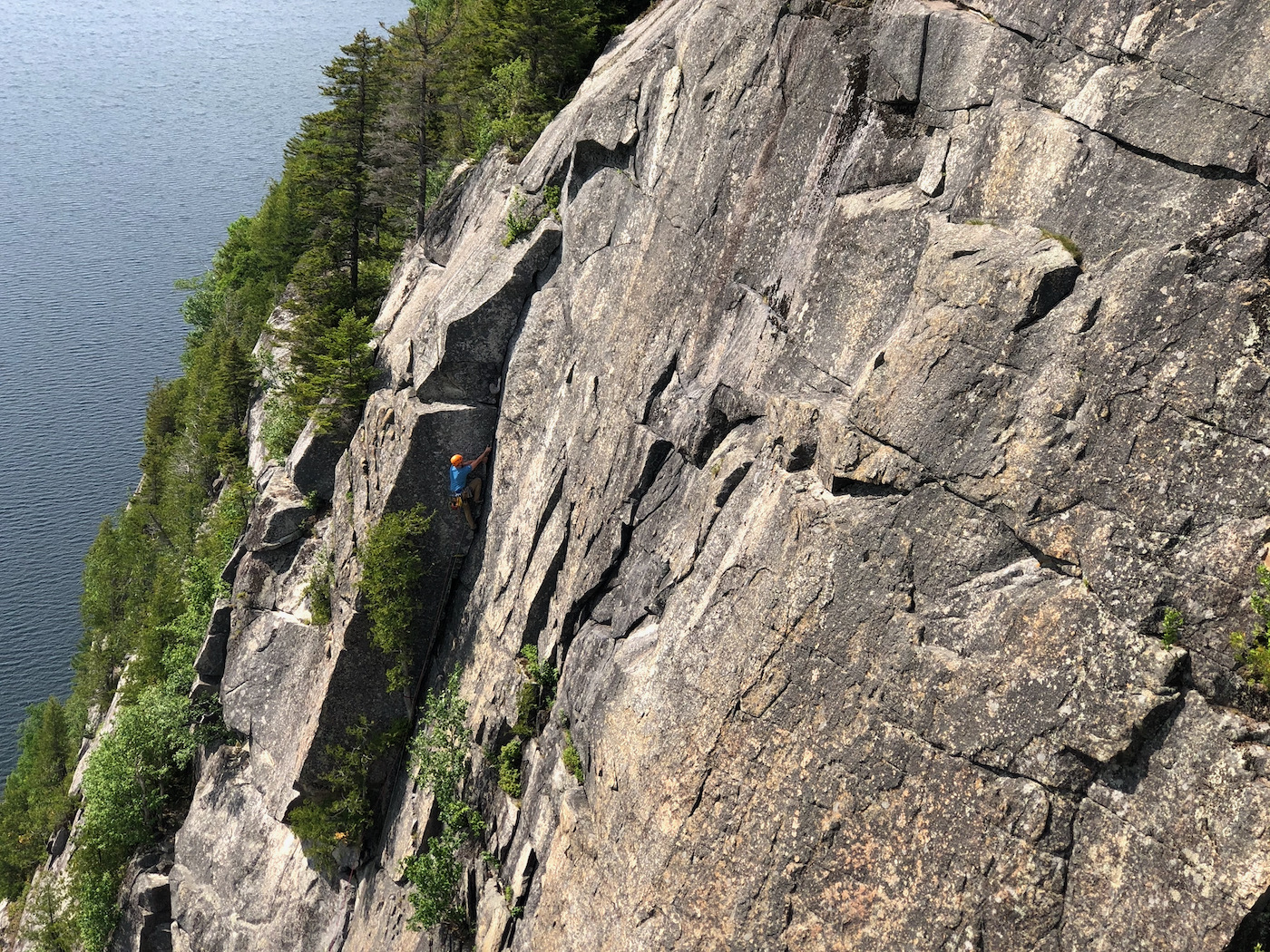 My jamming has hardly improved but I was going up pretty fast, smearing off of the slick face and grabbing pro when possible. It wasn’t easy — laybacking puts your center of gravity too far from the wall and placing protection was precarious, I felt like I could blow off at any moment. There was a shelf above my head, and I knew if I could get one last piece, maybe I could throw a hand up for it.

I took the last big totem off of my harness and give it a few tugs, it was perfect. With fading strength, I pushed off of the main wall and jumped up getting my left hand on a perfect jug. To my surprise, a couple of spectators at the top saw the whole thing and let out cheers at the dynamism. That has never happened to me before, like having someone on a lift above when you make a perfect tele turn in powder.

I played it cool and stepped off to the left, working my way out of sight of everyone like the party before me. My belayer came up even wider eyed — “Man, I can’t believe you led that!” Me either, but I played it cool again. Not bad for a skier pretending to be a climber, I guess. Even better is that there’s no one making me pick, and I’m just happy to have figured out a couple of really good ways to pass my time here.