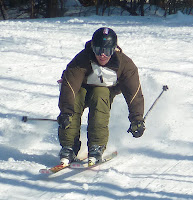 Pk Gerstenberger is joining NYSkiBlog this season as the ski reporter for Hickory Ski Center in Warrensburg, NY. He’s a 17-year-old all-mountain skier who has been skiing at Hickory since he was two years old. Pk’s family has been skiing the hill since before he was born. They love the atmosphere and the challenging terrain.

Pk is a junior at Shenendehowa High School in Clifton Park, NY. He plays for the soccer team and is active in the high school ski club. Last season, Pk took first place in the Hickory Terrain Park competition.

From the time he started skiing, the only seasons Pk missed at Hickory were during the years when the mountain was closed. During that time, he filled the void by skiing Whiteface, Gore, West Mountain, Jiminy Peak and other mountains across the northeast — but in his mind, there is no mountain quite like Hickory.

“It’s incredible to experience the diversity of the mountain. Hickory’s got a lot to offer the expert skier: steep terrain, tree skiing and new terrain park. It’s a great spot for an up-and-coming skier, one of the most challenging mountains in New York.”

Pk has made it a point to ski every trail and tree shot at Hickory each season. While he will continue to roam a variety of ski hills during the week, every weekend he’s cruising the trails, tricking in the park, or ripping through the trees at the mountain he loves the most.