My girlfriend Amy has really jumped into skiing this season, traveling with me across NY and VT at early hours in search of snow. I decided it was time to slow down the pace from Wu-tang Clan to Marvin Gaye. Instead of a six AM wake-up call to action, I surprised her with a double rainbow moment: a relaxing stay at a funky Catskill hotel to celebrate Valentine’s Day and ski. 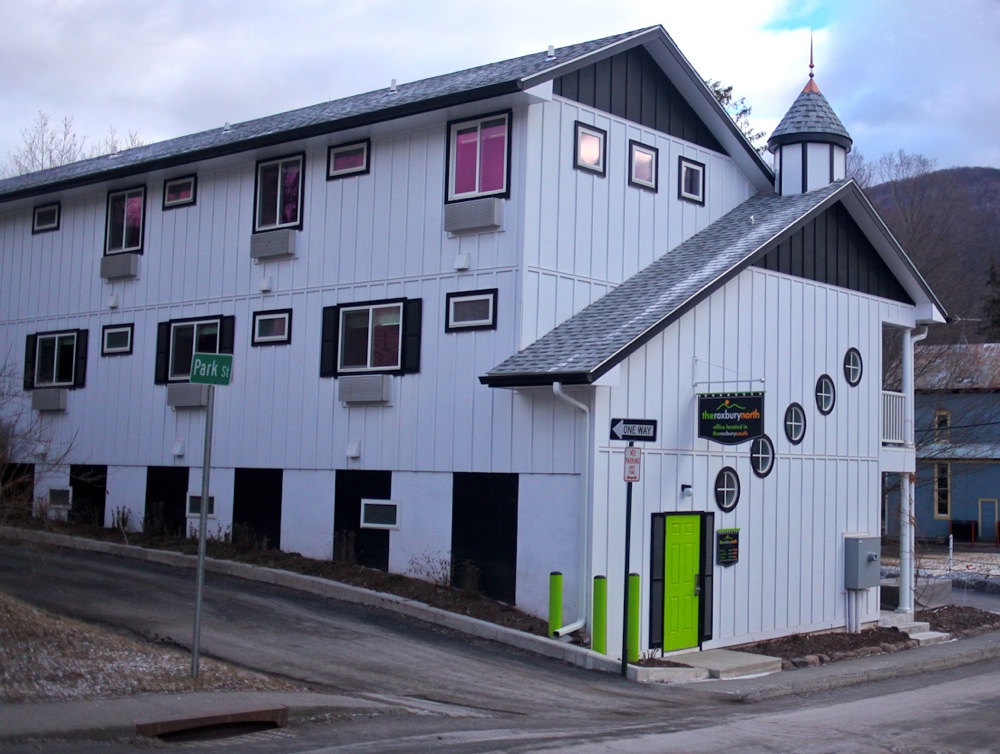 Although no one will confuse Roxbury, NY, with preeminent vacation destinations Lake Placid or Niagara Falls, it’s a charming town tucked into a valley with views of hills on all sides. The star hotel, The Roxbury, recommended by a friend, impressed my better half with lots of modern and quirky art, plenty of shiny surfaces, and high brow bath products I wouldn’t even know how to procure.

I was happy to be staying someplace very clean, in a picturesque small town, with nice restaurants nearby so I wouldn’t have to worry about driving, but Amy’s glee about the situation turned it into quite a special vacation.

We woke up to another half inch of snow on the car and after a nice free breakfast, we decided to ski Belleayre. The hotel had deals on lift tickets to all four Catskills resorts, but Bell was the one Catskill hill I haven’t skied this season. In addition, Belleayre had put on a nice show flashing the guns on a bunch of trails the day before, and for $30 it was tough to pass up. 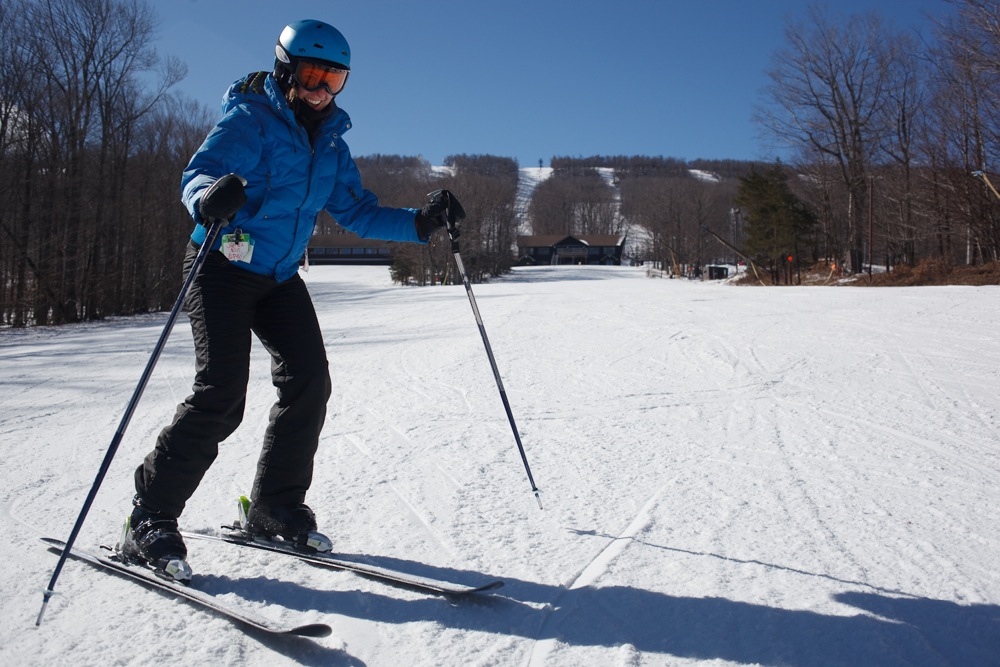 It’s amazing and very charming that Amy is somewhat in awe of every new hill we ski. We invariably start on the easiest slopes possible and work our way up in difficulty as the day goes on. Sometimes the windy and easier trails provide views that I’d never notice otherwise, and the routine is really growing on me. On this day we had no choice — the only way up from the lodge were beginner trails down to the Superchief Quad.

We wound our way down the ridge on Onondaga a few times. We didn’t arrive particularly early but the corduroy wasn’t going anywhere. Skiing anywhere midweek is a treat. Belleayre had few skiers and they’ve opened a decent amount of terrain. We also had perfect weather, temps in the 20s, a blue sky, and very light winds.

I convinced Amy that the really exceptional terrain was on the other side of the mountain, and that if we walked along the ridge to the Tomahawk Quad we’d really have the place to ourselves.

The hike definitely used up some of the goodwill I’d built up, but it was worth it. We skied over there taking in great views of the valley and the Plattekill State forest to the northwest. 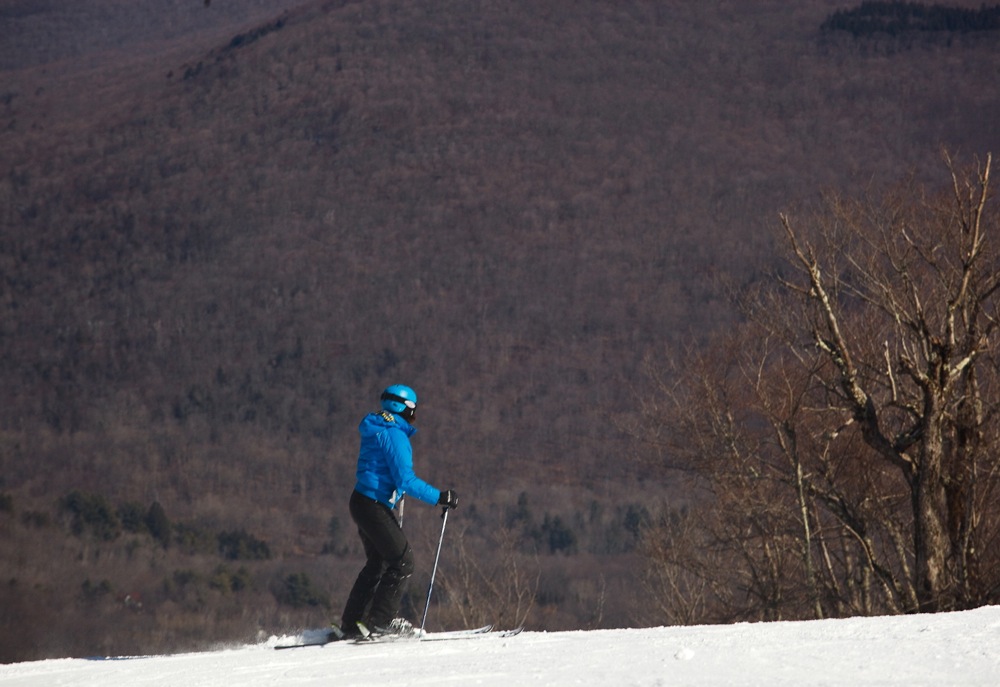 I was feeling pretty confident so I nudged Amy gently towards Dot Nebel — one of my favorites at Belleyare. It was her first time with a blind rollover, but I’d been prepping her to deal with the short steep headwall all day. When she looked over the edge she stiffened up, but ultimately stayed both aggressive and in control enough to feel great about the accomplishment.

Lift 7 went down for a bit so we stayed on Tomahawk and I didn’t mind at all. Lower Dot Nebel reminds me of being out west as much as anyplace east of the Rockies. There’s ample elbow room, it catches sun like a big mitt, and the rolling terrain flows all the way down to the lift without a run out, in a way I picture Steamboat or Sun Valley doing. 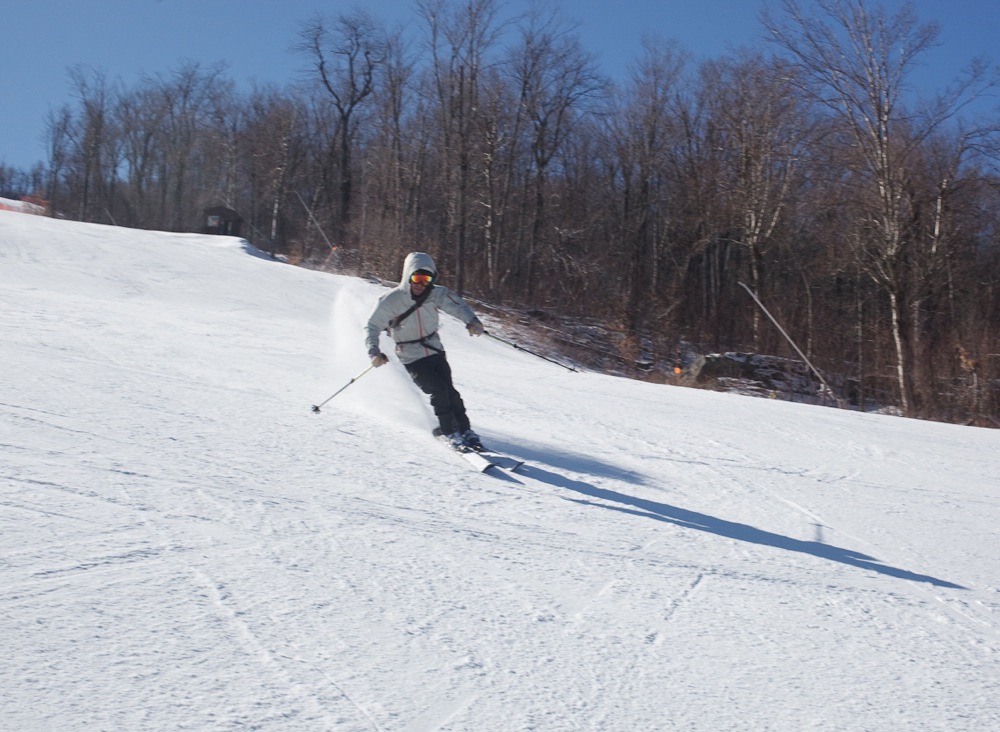 I’ll probably never know why women shower before skiing or why it’s hard to get motivated to ski day trips. It was pretty cool to wake up to a beautiful morning and to take a quick trip to some empty slopes. For a day, the Catskills provided us the some of the same respite from real life, with terrific skiing, that you’d expect from Lake Louise or Vail.

Maybe it was more comparable to being in Reno and skiing Diamond Peak. We certainly hit the jackpot and I’d like to send a big thank you to The Roxbury and Belleayre for helping me make it happen.