I’m fascinated by lifts and lift technology, so I was excited when GM Mike Pratt offered me the chance to visit Gore Mountain for an update on the new lift, the Adirondack Express 2. 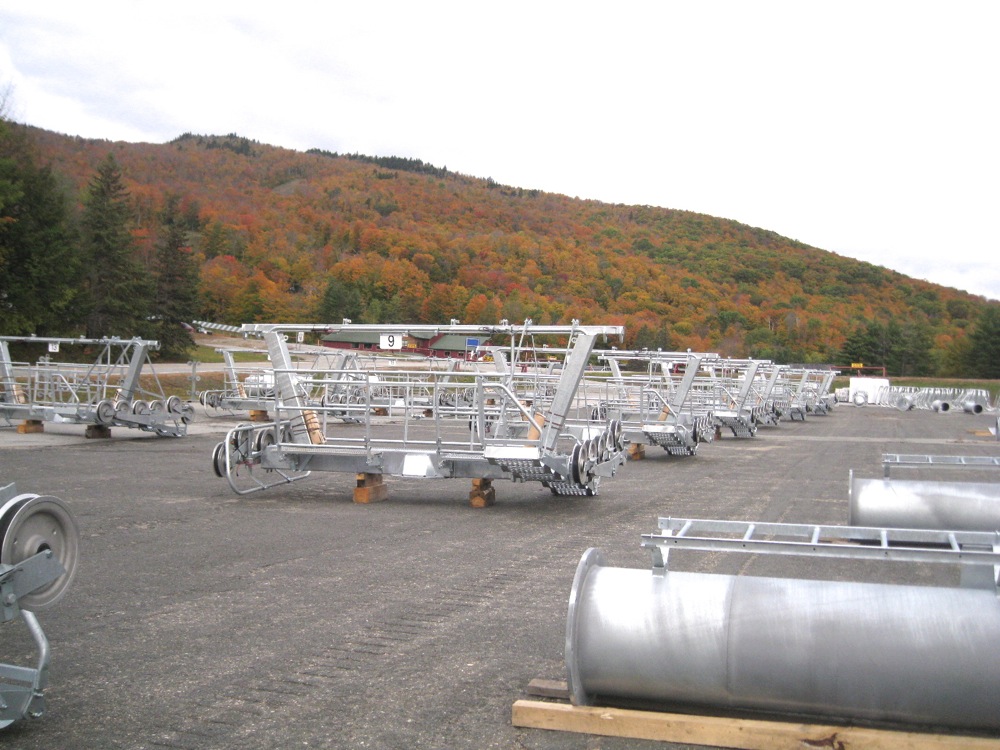 The new high speed quad is a bottom drive with the same configuration as the relatively new Burnt Ridge Quad. The motor is 700 horsepower and runs off of 480 volts.

Max design speed for the new lift is 1100 feet per minute (fpm) like the Burnt Ridge Quad and Gondola. While it’s unlikely that it will be run at full speed, it will still be considerably faster than the old lift. 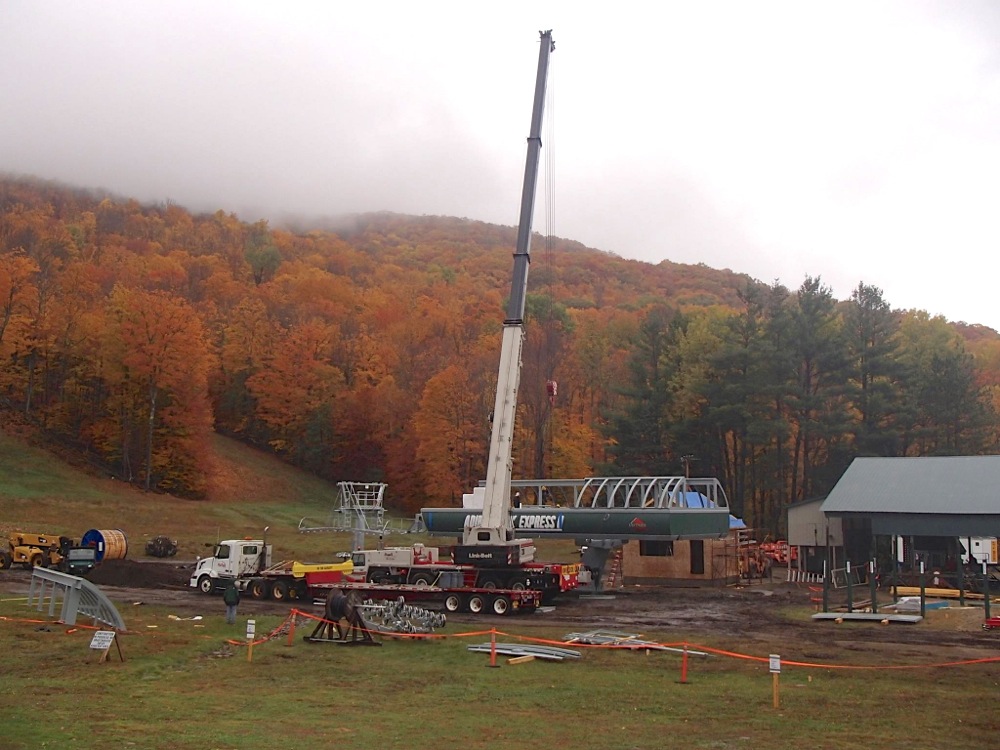 Mike described some of the problems that led to the replacement of the old lift. The original Adironack Express was 30 years old and the design was no longer supported by the manufacturer. Repair often required fabricating custom replacement parts which is a costly, time-consuming process. 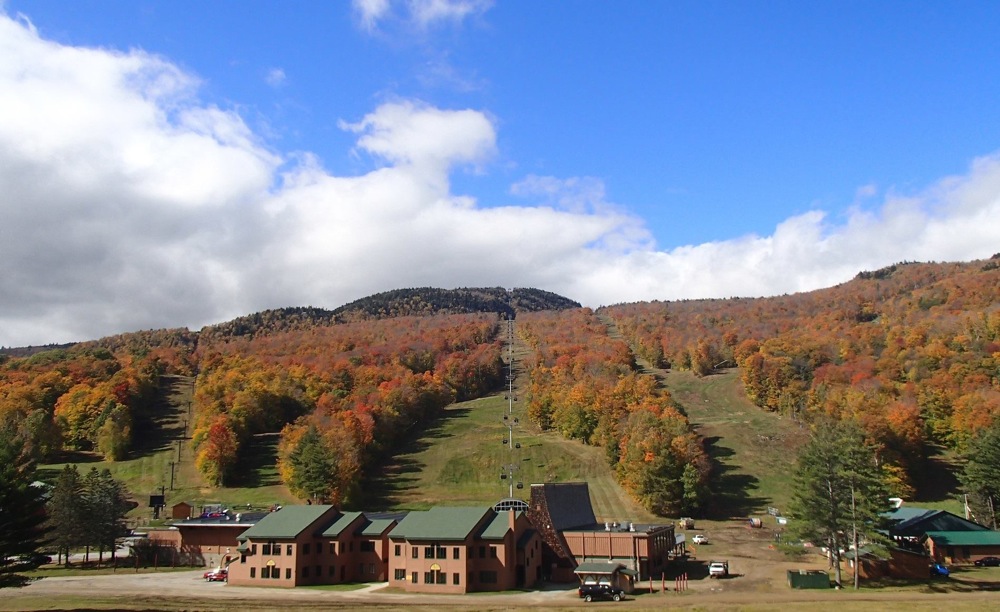 The towers from the old lift were removed carefully allowing them to be reused in the future. The detachable parts were sold for scrap.

The unloading area in the Saddle has been reconfigured. The new lift is 15 feet shorter, giving more space for the ramp. The terminal is also five feet lower, and six feet closer to the Saddle Lodge. Before this change the ramp had a sharp turn that was often slick. The new configuration makes the turn much more gradual meaning less ice, fewer accidents and fewer lift stoppages.

As the top terminal is the return, the roof was already going up. This lift has tensioning at both terminals. Most of the tension will be applied at the bottom as it is more efficient to tension the lift from there. The tensioning at the top will be used for fine adjustments. 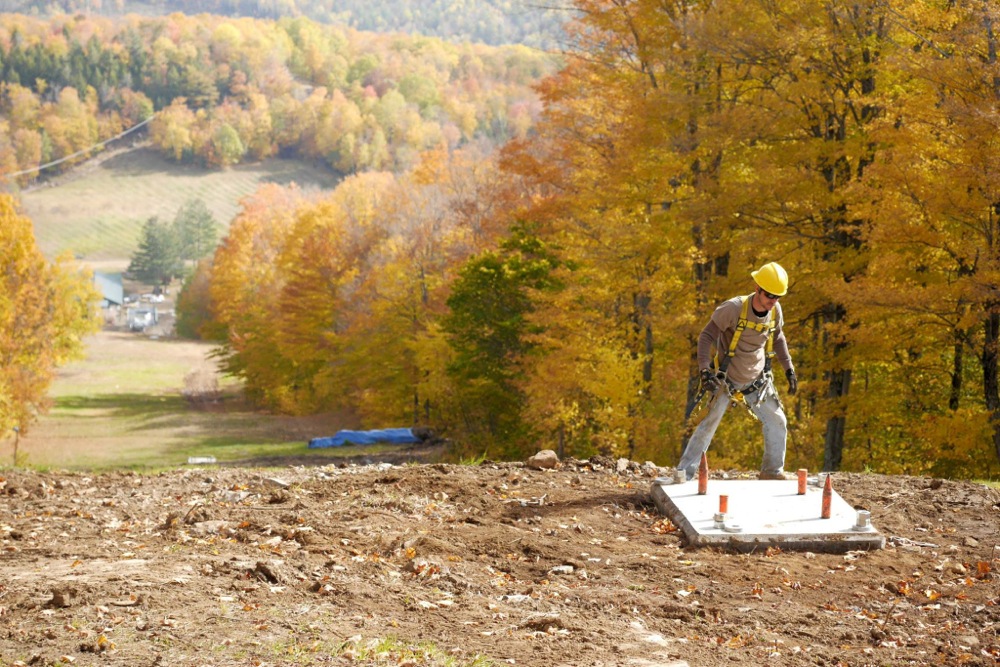 The day of our visit was right before helicopter day. That heli-installation was expected to cost $25,000 and take about four hours of flight time.

The East Side of Gore has several “steps” or short steep drops. On Showcase, some of these have been moderated producing a more constant pitch. The new lift has 8 fewer towers, creating a more wide open run. 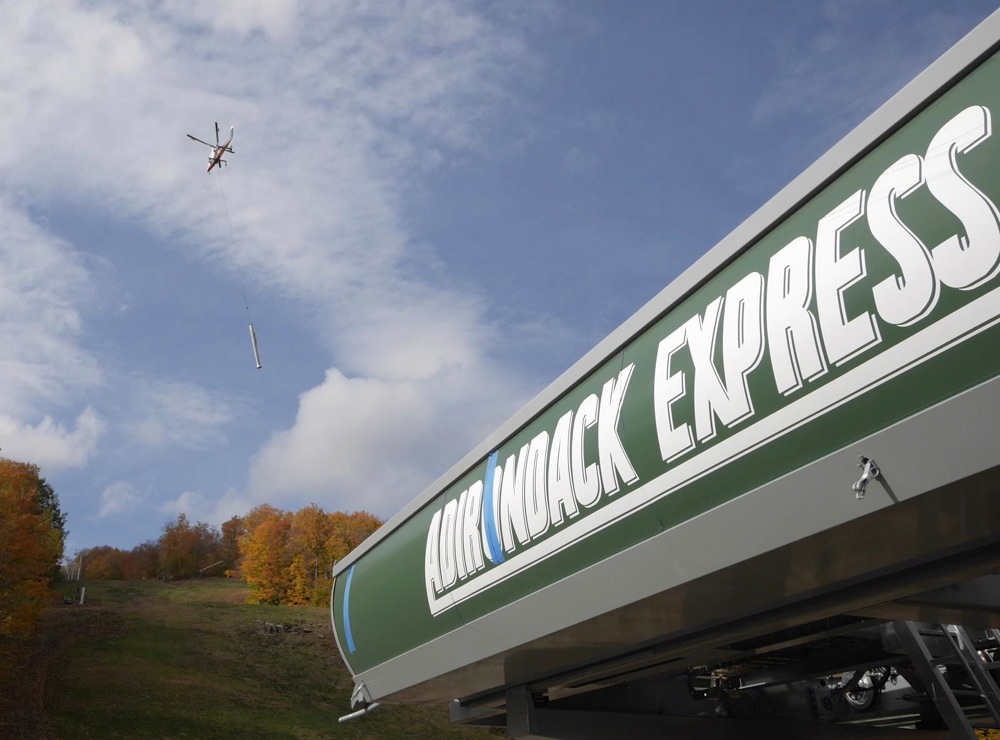 All of the old footings were jackhammered and the remains removed. This appeals to me for aethestic and safety reasons.

The Adirondack Express 2 wasn’t the only improvement at Gore this summer. Topridge received 22 new snow guns.  The new HKD Impulse towers will be more efficient using only 25% of the air used by the Ratnik ground guns that have been used in the past. There were also new snowmaking hookups added near the Pipeline Bridge which will improve connectivity to the Ski Bowl.

Looking ahead, Mike confirmed that the next major upgrade will be the replacement of the High Peaks Chair. It has not been decided what the new lift will be. The Sunway Chair will be replaced after that with a triple. Having a triple allows one instructor to ride with two beginners simplifying the lesson process. This triple may use some parts of the original Adirondack Express, so the old girl may live on, in some form, at Gore.

11 comments on “By the Numbers: Gore’s Adirondack Express”