Access issues have hampered recreational enthusiasts dreams of enjoying the outside world across the country the last few decades, but the NY metro area is on its way to claiming a new victory. 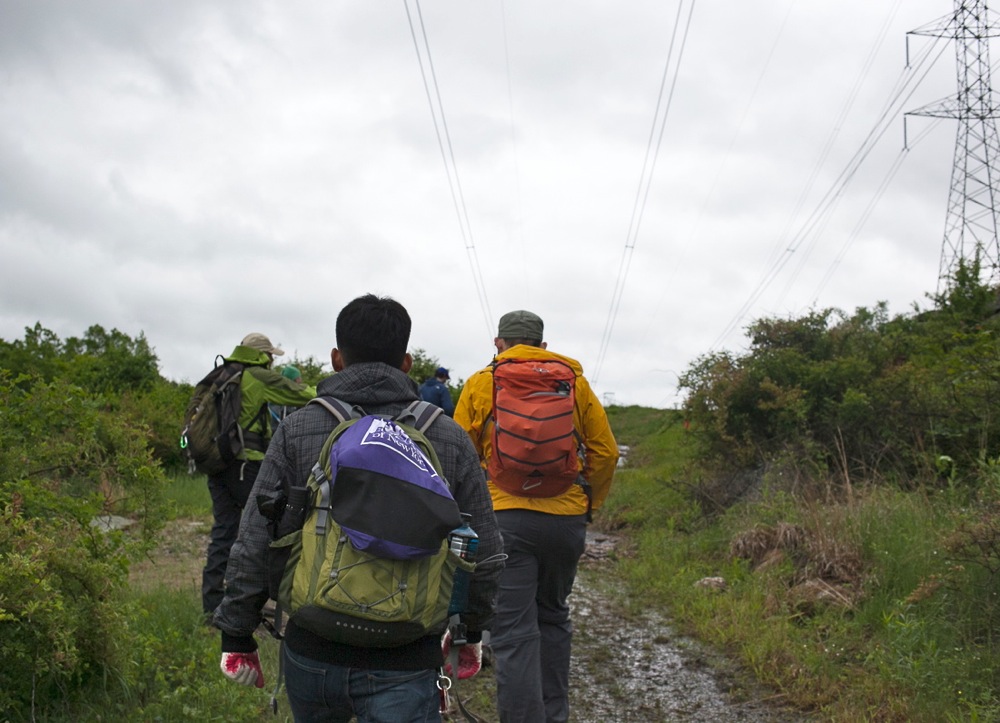 Much like the North Brooklyn Boat Club, another community group has organized to fight the bureaucracy and cut red tape. The area in question — dubbed “The Powerlinez” due to the proximity to the massive and popping electricity towers that traverse the area — has long held the interest of local climbers. But the Palisades Interstate Park Commission or PIPC kept the area off limits due to liability and trail use concerns.

In order to protect the possibilities, ‘Linez climbers were secretive and kept any information about how to climb the area off of the internet for two years while negotiations with the park authority took place. 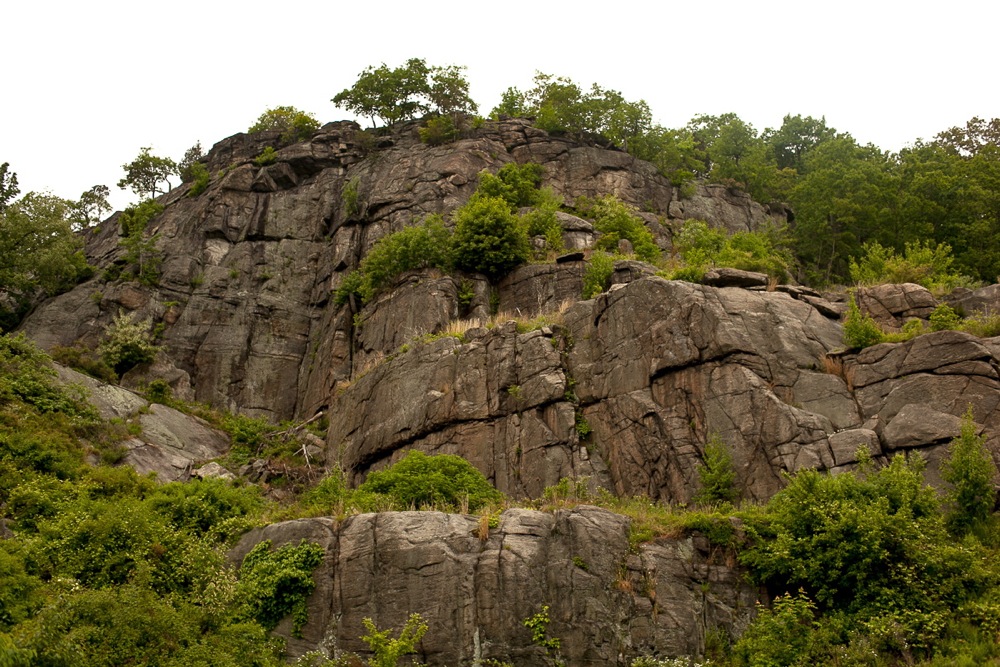 Now, with the air of secrecy lifted, the attitude of the community is 180 degrees from the competitive scene you’ll find at other crags and the taped indoor routes in the Northeast.

The volunteer day this spring proved that the area has something for everyone, with several demographics represented from local high schoolers to Appalachian Trail vets. 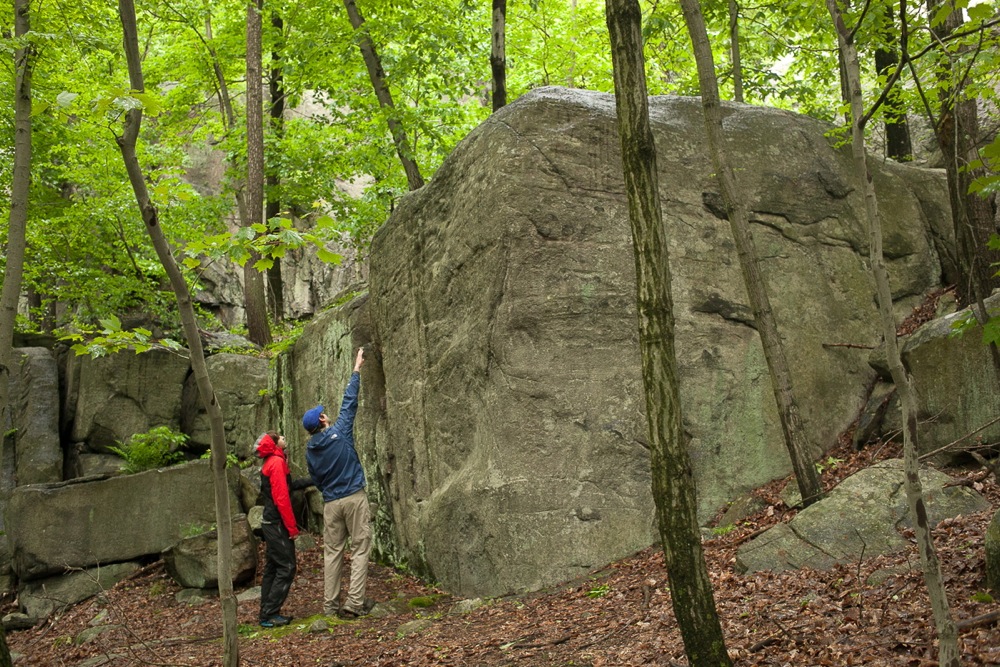 The most amusing part was when everyone agreed to call it a day. Rather than packing it in, many of the climbers ducked back into the woods to find new boulder problems to kill the rest of the afternoon. As tiring as it is to swing an axe, it still doesn’t compare to climbing.

There are still obstacles to overcome. The PIPC requires a signed waiver to be held by anyone in this area, but that’s hardly onerous. Possession of the waiver grants you access to a huge amount of land just south of Harriman State Park. The area is as wild as you could possibly imagine; the biggest park south of the Adirondacks, yet only an hour from New York City. 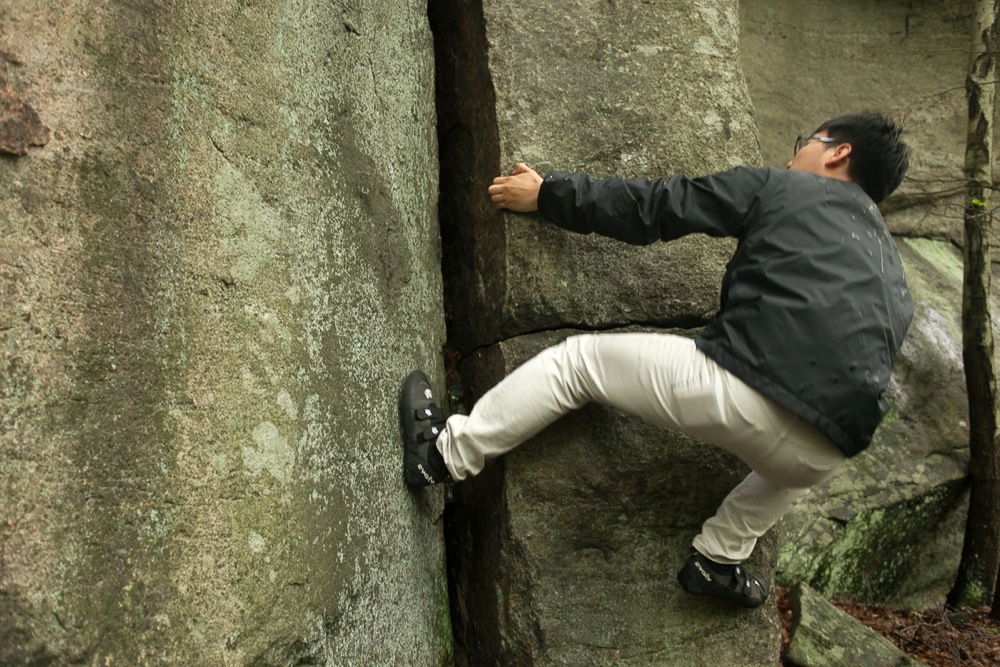 Unlike the Gunks, the Torne Valley is free to explore once you take care of the paperwork. On a recent trip I found ample amounts of wineberries, blackberries and first ascent opportunities, while my friends wandered towards a rarely visited portion of Harriman and caught sight of a momma bear and three cubs.

After multiple attempts this past summer, I was finally able to try some steeper, longer top-roping. We snagged three legal parking spots  and were quickly on our way. (Look for legal parking before you make the left turn on the bridge, don’t block any driveways!) 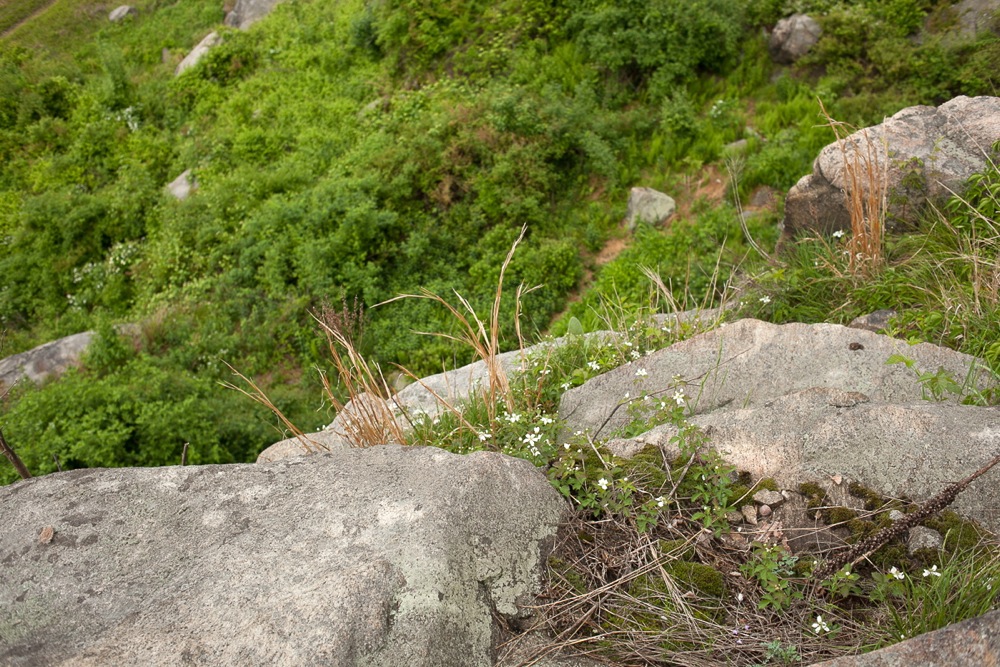 We neared the top of the ridge to inspect some sizable cliffs we’d glimpsed earlier. They looked manageable for my new-to-the-sport partner.

There were chalk marks on the rock, but it was hard to find broken glass or a cigarette butt – the community is still small enough to take care of this resource. The shady meadow made a perfect place to belay from, with just the wind in the trees and the not-quite far off traffic noise of I87 to keep us company. 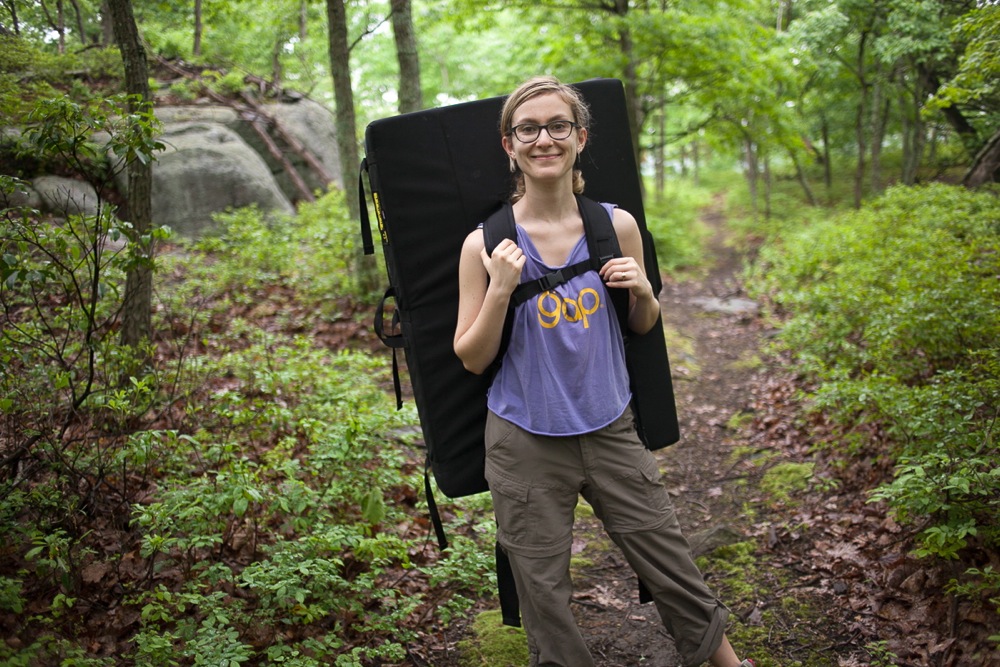 But having never built an anchor outside before, I quickly and silently got to my nervous business.

Beginner climbers are at a real risk when they take up the sport and you don’t have to look hard to find horror stories. Not wanting to star in one of my own, I decided to throw everything at the wall to make my top rope work. There were four trees near the cliff edge, and each received a noose with different sizes of cordolette, webbing, and climbing rope. 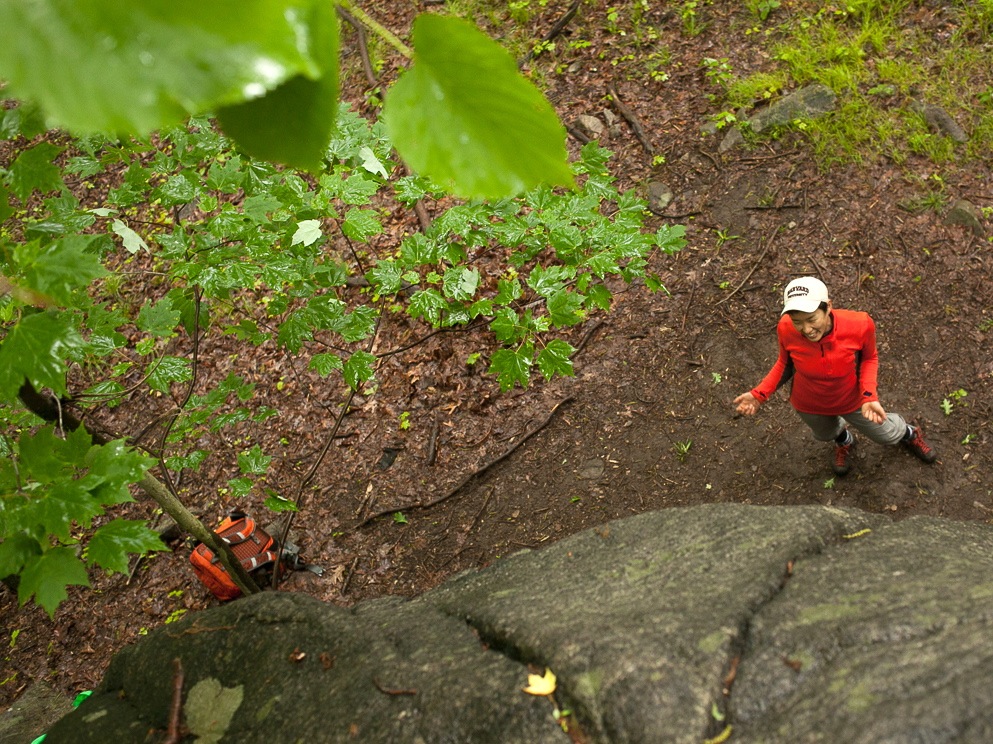 The locking caribiners were draped at the same length, just over the edge, like the illustrations I had studied in Freedom of the Hills.

Marketing would have you believe that you need to travel greater distances to find the best adventure or better conditions, but the Powerlinez climbing seemed to prove that, as with our local skiing, there’s local adventure everywhere you look, and that nature is closer than you would think. 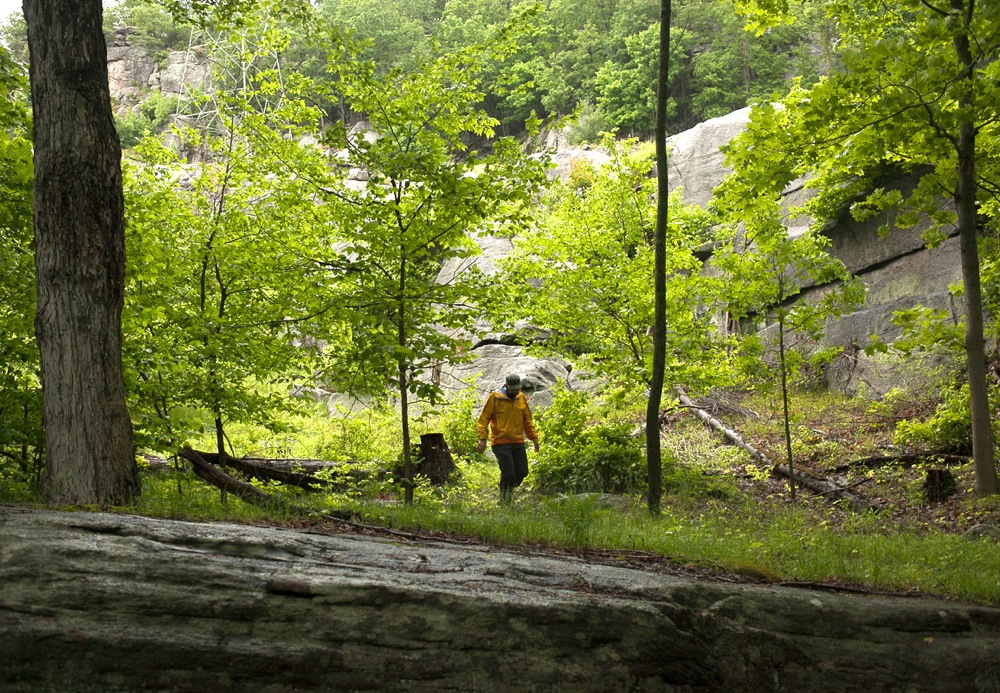 If you’re interested in climbing the Powelinez, visit a local gym like The Gravity Vault or The Cliffs at Valhalla to take care of your paperwork. Don’t forget to buy the updated Powerlinez guidebook from Jon Crefeld. And lastly, take care of our new park and yourself by climbing responsibly.

I’d say that just like standing at the top of Whiteface and enjoying the view that we’re lucky to have this, but the truth is that we owe a great deal of thanks for the effort put forth by the guys and gals that made this happen. Thanks guys.

7 comments on “Watts Up: Climbing The Powerlinez”