For the first time I can remember, skiing barely crossed my mind as I drove into the Catskills. After one of the most perfect springs in years, summer turned the page by burning it off the calendar. 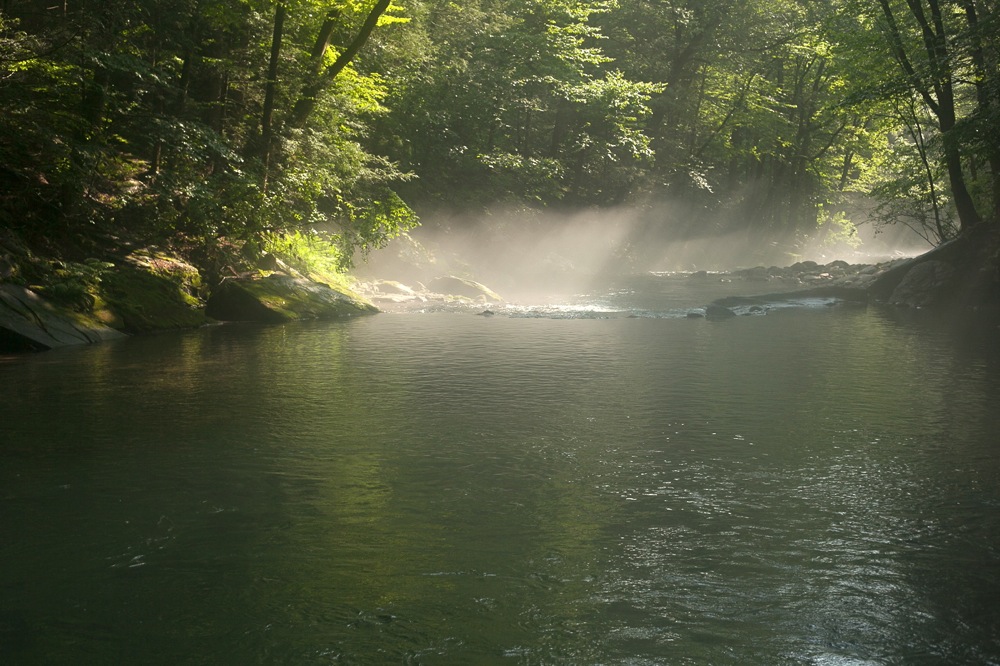 Multiple days over 90 degrees had me and my friends feeling the heat. With a rare midweek opportunity to hit the trails with a car full of company, we jumped at the chance.

With a group of mixed experience, I scoured my maps to find something easy with advantageous lookouts and a lack of crowds, that would also be close to some cool options for after the hike. After weighing endless options, I settled on the trail up Peekamoose Mountain, for selfishly, I had yet to hike it and wanted to see Wittenberg and some of the reservoirs from that side. 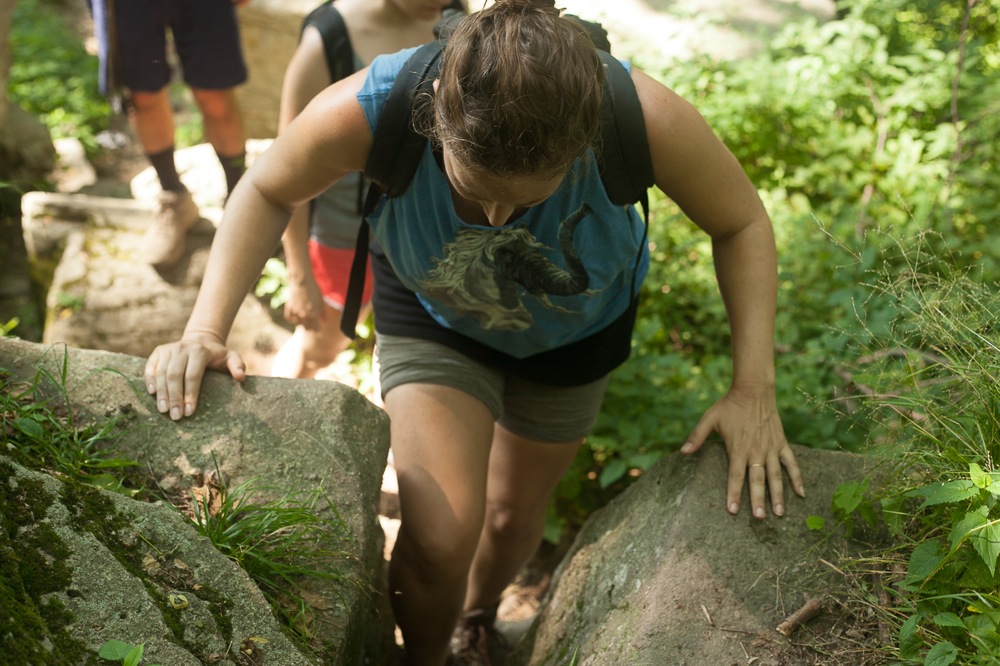 The route has significant vert, but it didn’t look too steep at any one point. I put on my best face for the girls: “You. Can. DO IT!”

The trail lacks for views on most of the lower portions of the hike. And it’s devoid of features until you hit a glacial erratic —  the reconnoiter rock — a few miles in.  It didn’t matter much, we were happy to be in the leafy, breezy canopy, out of the heat. 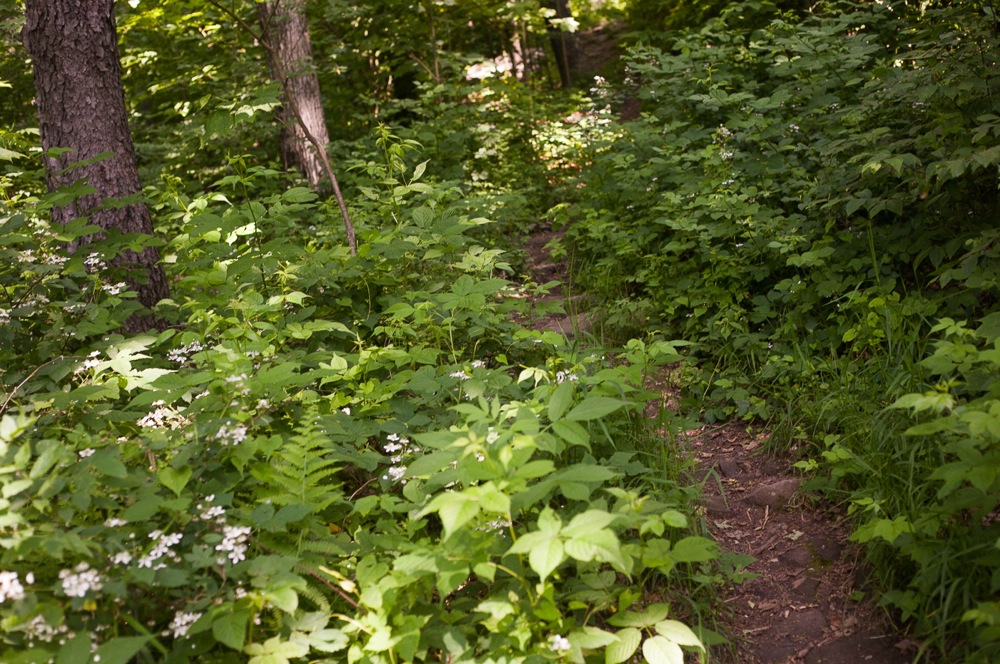 The trail gradually steepens and you gain elevation, and at 3500’ the Sundown Valley opens up to you. It’s an amazing spot; it’s so secluded in this portion of the Catskills it is easy to pretend you’re out West. It’s a truly rugged and spectacular area with endless ravines and peaks. Another guide might have chosen this spot as the turn around but I wanted to push towards the summit.

In true Catskills fashion, the ridgeline flattens out and — though the sides are steeper than a Gehry roof — the views are limited. I was grateful for the canopy and some rock cover when a thunderstorm rolled in with the speed of a NYC deliveryman on one of those electric bikes. 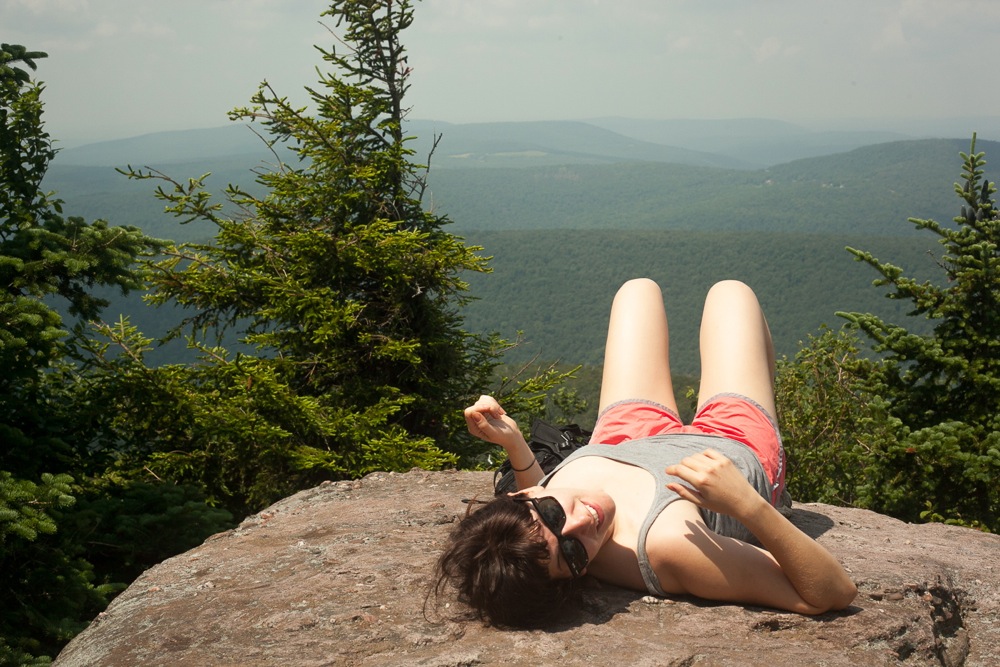 The storm was just as discourteous — it tried to ruin our hike — but we pushed on and made it. There were a few members of the trail crew working, and they’d cleared a new lookout towards The Ashokan Reservoir and it made a perfect place to have lunch.

Wandering down we were consumed with thoughts of swimming in a nearby spot known as the Blue Hole. Nothing was going to stop us and we made good time on the descent, polishing off the 3.6 miles and 2300 feet in short order.

The swimming hole was as cold as advertised, and the temperature inversion created an amazing fog over the water that seemed come and go as it pleased. If I had it my way I’d live nearby and swim there every day. Unfortunately, we had jobs back in the city.

But first, I wanted to fill up at Hickory Smokehouse in Kingston.  Nothing can beat trying nine meat dishes, and it took the sting out of returning to reality. I’ll be back someday, maybe for good. The Catskills are world renowned, the subject of much political debate, and the butt of many jokes since the 60’s, but for those who know them well they are as special as any place you can find.

Maybe someday, for me, that will outweigh the other stuff.