The good news from the NOAA, is that there is no real bad news:

In announcing the 2008-2009 U.S. Winter Outlook for meteorological winter from December through February, forecasters at the NOAA Climate Prediction Center are calling for warmer-than-normal temperatures for much of the central part of the nation, and a continuation of drier-than-normal conditions across the Southeast. 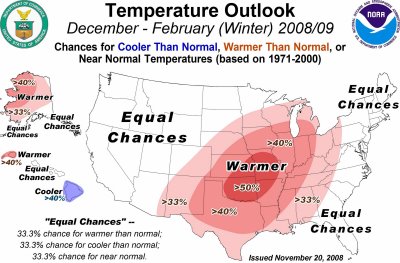 With the absence of La Niña and El Niño in the equatorial Pacific Ocean this season, predicting weather patterns on seasonal timescales becomes increasingly challenging. Instead, other climate patterns over the Arctic and North Atlantic regions may play a significant role in influencing U.S. winter weather. 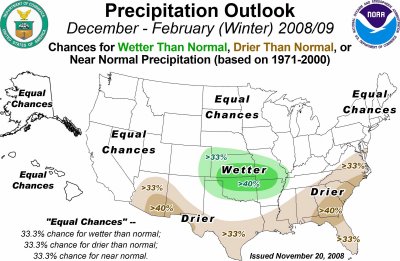 “These patterns are only predictable a week or two in advance and could persist for weeks at a time,” said Michael Halpert, deputy director, Climate Prediction Center. “Therefore, we expect variability, or substantial changes in temperature and precipitation across much of the country.”

The U.S. Winter Outlook does not include a snowfall forecast. Snow forecasts are heavily dependent upon winter storms and are generally not predictable more than several days in advance.