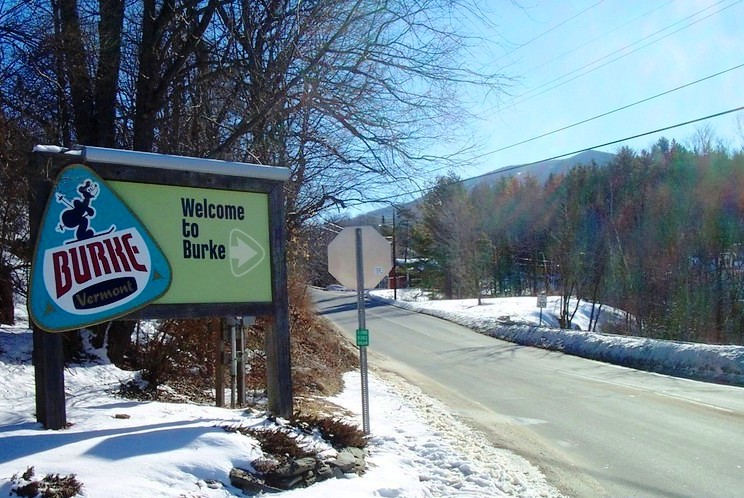 By now, you’re probably familiar with my rap — since becoming a downhill skier ten years ago, my favorite mountains are the ones that don’t get the big feature articles, the ones that don’t attract several hundred thousand visits every season, or end up on people’s Top 10 lists. That said, I’ve also been to my share of popular destination ski resorts, both in the northeast and out west. While I can’t say that most are my cup of tea, within a few hours of arriving there, it’s pretty obvious why they attract so many people. They usually have a combination of decent access, dependable conditions (thanks to natural snow, manmade, grooming or a combination of all three), up-to-date lifts, lots of terrain aimed at their target demographic (either families, experts, or both), extensive slopeside amenities (hotels, condos, restaurants), along with a marketing team that knows how to position these assets to potential customers.

Conversely, whenever people get into discussions about the smaller, underrated joints, sooner or later the conversation always turns into “This place is great. Why don’t more people don’t come here?” It’s a legitimate question, but one that rarely leads to an answer everyone can agree on. If you’re trying to understand why a ski area becomes a “Mountain Less Traveled,” it seems reasonable to reverse the points about the popular destinations mentioned above, thus:

You can apply these bullet points to any under-the-radar hill in the northeast that “deserves” a bigger following, so let’s try a few of my favorites.

Under its new owner, Magic Mountain VT is finally beginning to make inroads against negative perceptions that have dogged it for years, including (#2) erratic conditions, (#4) untrustworthy lifts, and (#5) it was best suited for advanced or expert skiers. Nearby Ascutney VT was unable to reach critical mass based on one crucial violation (#2) — stingy natural snowfall combined with inadequate snowmaking efforts that pushed away customers, which prompted them to rarely use their top-to-bottom high-speed quad (#4), resulting in even less business and eventually its recent closure. Well-regarded Pico Mountain VT would be much more popular if it weren’t located right next to Killington (#1). In New York’s western Catskills, Bobcat broke all of these commandments and finally closed after the 2005 season. But in an example of an exception proving the rule, Plattekill, only a few miles away, violates the same five tenets but manages to stay in business.

What’s fascinating about these examples is that it really doesn’t matter whether the alleged infractions are true on an absolute basis. If a perception exists among a sufficient amount of people, it may as well be reality. Break one or two of these five rules and your favorite mountain can be viewed as a quirky maverick, but three or more strikes often indicates that a trip to the NELSAP List may be in its future. Of course, the wild card in this discussion is whether a ski area can stay afloat through wise fiscal management, force of will, or sheer luck.

Which leads us to one of the more puzzling test cases of my theory: Vermont’s enigmatic Burke Mountain — a ski area that has been in operation for more than five decades, but is still hiding in the proverbial shadows. With less than ten visits at Burke, I have more questions than answers. All I know is after each of my days there, even the ones with less than optimum conditions, I walked away scratching my head wondering why more people weren’t skiing there. Before I went for the first time in 2001, I had heard it referred to as “a fun mid-sized hill with piles of potential,” “criminally underrated,” and “soon to be discovered,” and a decade later, these same taglines still fit.

The problem is, being identified so closely with the NEK is a double-edged sword that leads straight into the jaws of Rule #1. Even though Burke is only seven miles from the busy north/south I-91 corridor — putting it within 3.5 hours or less for people from the Boston region and 2.5 hours for Montrealers — it’s gained a reputation for being a long drive from everywhere. Since I don’t live in either city and can only speculate about the question of accessibility, the fact that people from both regions can stop at popular mountains on the way to Burke or can reach more popular resorts in approximately the same drive time may help explain the “too far away” label.

Moreover, the fact that Burke is located in the same geographic region as its more fabled ski-area sibling Jay Peak has led to inevitable comparisons of two relatively dissimilar kettles of fish. It’d be similar to upstate New Yorkers comparing Gore and Whiteface. Yes, they’re part of the same mountain range and about an hour away from each other (just like Burke and Jay), but everyone knows that each has its own specific selling points, and that you don’t go to one expecting what the other does better.

The Jay association also has negative repercussions on Burke for Rule #2: conditions. Burke’s annual snow total sits somewhere in the low 200-inch range, a decent statistic for most places in this part of the U.S. Meanwhile, Jay, which averages 350 inches of snow per season, the most in the East, makes Burke look like Dry County. There’s no question that, as a rule, Burke gets neither the colossal dumps nor the small refresher storms that hit Jay, Stowe, or Smugglers Notch.

But with low crowds, the snow gets a small fraction of the beatdown like at the big boys, both on-piste and more specifically in Burke’s tightly-spaced, well-pitched glades. Talk to anyone who’s been there. This is a game-changer, especially when you go there a day or two after a dump, and aren’t forced to spend the day huffing and puffing through sloppy seconds in the woods. In short, between the terrain, the lack of people, and the almost always better-than-expected snow conditions, these are some of my favorite trees in the East. 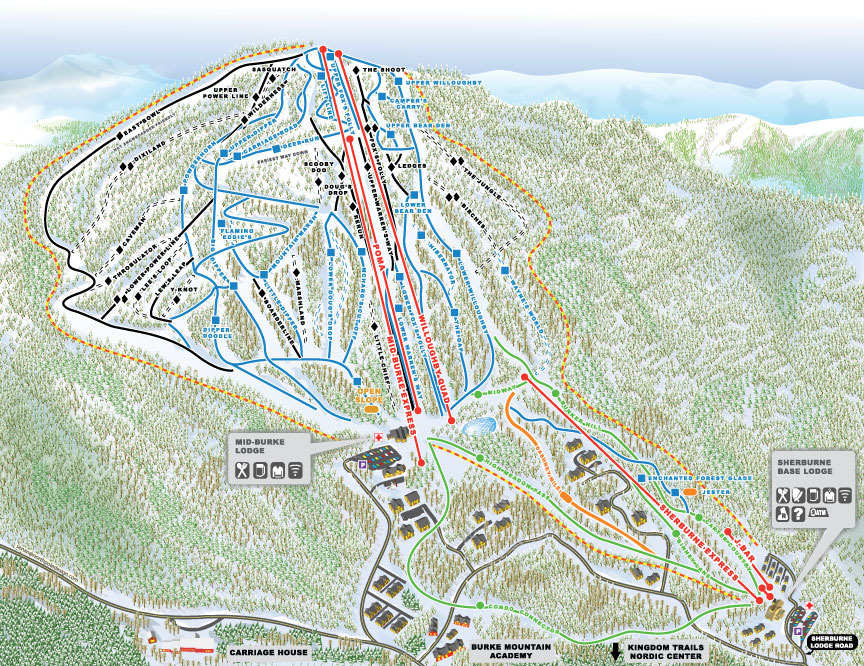 Speaking of on-piste — although Burke is only about the size of Pico, it has what can be argued as some of the best intermediate terrain in the northeast. Covering around 1,700 vertical feet, these winding, rolling tree-lined cruisers are borderline sublime, including what might be my favorite blue square east of the Rockies: East Bowl.

This trail’s short traverse at the top, and an even longer, flatter traverse at the bottom combine to dissuade the unmotivated from doing laps there. In a nice bit of truth in advertising, Burke’s trail maps label East Bowl “not snowboarder friendly,” which keeps two plankers very happy.

Burke gets repeatedly dinged by the HSQ-loving masses for having a main lift, the Willoughby Chair, that has been called variations of “mind-numbingly slow,” “brutally cold,” and “just plain unpleasant” (#4) by customers for years. Maybe I’m going uncharacteristically glass-half-full in my advancing age, but when there are never lift lines at the base of a lift, as is the case at Burke, you really shouldn’t be complaining about spending an extra three or four minutes on a chair. Even if it’s in the single digits and the wind is howling — in which case the speedy Poma that runs parallel to the chair can be a great way to get uphill — just be happy that there won’t be any people poaching your line in the woods or getting in your field of vision as you scream down a groomer.

While the 2005 installation of a detachable quad on the green terrain at the bottom of the mountain may have been great for one potential revenue stream (beginners and their families), putting a high-speed chair on the main terrain would seem to be an easy fix to attract the majority of people who’ve been on the fence about Burke for years. That is, if the ski area can afford it, which brings us to #5.

Going through the musical chairs of Burke’s owners/investors since the late 1980s is a sad exercise for a proud mountain like this. That said, Burke’s website mentions that it’s received “partial findings on its Act 250 master plan,” which indicates that at least some of its extensive on-mountain and slopeside projects (“1,000 residential units, commercial space, 155 acres of additional ski terrain, three new ski lifts, snowmaking improvements, additional summer recreation facilities, and expanded infrastructure”) may be inching forward.

Given what has gone on at other similarly underfunded ski areas, combined with the current financial climate, who knows if and when any of these plans will become reality. And what kind of effect any of this will have on Burke’s profile is anyone’s guess as well. Will slopeside condos bring the ski area the kind of stability that has evaded it in the past, or is the real solution a high-speed chair that goes to the summit, after which everything else will follow?

I’m not sure what I’ve proved through this discussion, and why anyone would need to cheerlead for such a great mountain, but it has made me realize that Burke is on a Top 10 East Coast list (mine) and that I need to go back there this season.

12 comments on “Burke Mountain, VT: Pride of the NEK”