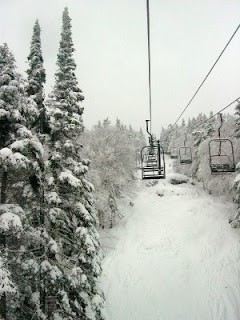 I’m having a hard time with this post. When you ski 9 days straight, it’s tough to remember exactly what happened. This much I reasonably sure of:

Thurs 12/27 pm: Arrived to find ankle high snow on the path, fallen since our last visit. We heated our building, made some dinner, watched some Elmo, hit the sack. It snowed 4″ that night.

Friday 12/28: There was talk of a mix, but when I walked through it in the AM, it was fluffy. The whole mountain skied very nicely. I think 2 or 3 glades were open, The Cave, Pinebrook, I forget. Surfaces were soft almost everywhere. 50/50 maybe locals and flatlanders. That night the call was for a mix after midnight.

Sat 12/29: Around 12:45 am I heard the sleet on our metal roof. When we got up in the morning it looked like 2″ of snow and sleet. What was in my driveway at 2000′ was very carvable – it wasn’t too cold. At the mountain it was like two different resorts. The top was in the clouds, 28F, Windy, “cold” and very firm surfaces. At the bottom it was Sunny, 35F and very spring-like and carvy. I hooked up with Zach, another teley guy who leaves me in the dust, but still seems to want to ski with me.

After relinquishing the idea that we should spend most of our time at the top, we hit almost everything on the bottom once or more. Twister, Showcase, Sunway, Quicksilver, Ward Hill, Douple Dipper. I always seem to skip Sleighride and Wild Air. 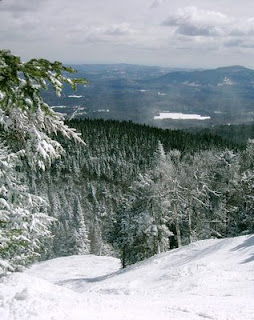 Sun 12/30: Zelda slept in and it was just my daughter and me. Neve to the Bear Cub Den. The BCD is awesome. It’s like school for Neve for $400 a season. We’ve put over 80 hrs in on it already this year so I’m down to 5 bucks/hour. It never dawned on us originally that Zelda could TAKE A DAY OFF, I could ski and she could read, or shop or whatever. To have time off from work when she wasn’t responsible for our daughter is a luxury. And Neve really likes it. She gets to run around in a way she can’t in our cabin. Back to the mountain, put it this way, my wife picked a good day to take off.

It was a hard surface, like the upper mountain, across the whole mountain. I did the best I could, greatest hits across the top and bottom. No repeats. Home by 1:30, this was the only day I struggled to find fun. Late that night it started snowing.

Monday 12/31: We got about 6″ overnight. All good stuff. I remember it was a good day, but I honestly can’t remember what exactly I skied. A few glades opened back up, but just a few.

New Year’s Day: From what I’ve read on the forums, this was a top ski day for many eastern skiers. For me it was probably in my top 10 lift serviced days ever. Maybe higher – as I get better, I enjoy the pow more. It started snowing at 8am about an hour before predicted, and it started hard. It snowed all day alternating between moderate and hard, never quite getting to puking. By noon there was 6 inches of fresh.

By 1pm EVERYONE was gone. Headed out in the storm in their cars. Yikes. BIG thanks to Powderfreak, the weather guy and noted NoVT skier. We took a look online when we found wifi at a local restaurant. I read his forecast “The Good and the Bad”, and also checked weather. 4 days out NWS was calling for a 70% chance of snow on New Years Day. The way I see it, when the NWS puts a 70% certainty into a forecast 4 days out, it usually means that someone over there thinks something real is coming. I always interpret that to mean a good chance for 6″ or more.

I used this info to make some calls on 12/31. Currently, we have no phone in our cabin. My only decent cell signals on the mountain are at the summit, the Saddle Lodge, and a few places on the north and east sides. So back to the top 10 day. By 1pm, everyone was gone, and it became a weekday. Everyone who was still skiing was going EVERYWHERE, regardless of ropes. I tried to remember some of the secrets I had been shown earlier in December. And I did find a few.

But there was no need to think that hard. The Straightbrook Glades, one of the most heavily trafficked glades at Gore, was only lightly tracked when I did 3 runs in a row. The combination of snows had you up to your knees, above obstacles, everywhere you went. I didn’t care if I was in a obvious glade – the snow was excellent. Somewhat dense, and consistent.

This was the day that I learned to lean back, cheat or whatever you call it. My skis are about 80 mm underfoot. It’s right in between a trail skier and a floater. Just barely enough to float me at 180lbs on a 174 length. So you’d pick any line that wasn’t skied, point your skis at anything and float over it. Maybe the leaning back isn’t proper, but it sure is fun. I found myself using my momentum, continuing when I’d normally stop, and actually hucking a few boulders – some intentionally. I learned to land small jumps. The snow really made learning easier.

It snowed another 2″ overnight for maybe 12″ total at our cabin. The upper mountain probably had 15. It got really cold at our place – 15 below. Temps were the story for the next 3 days – but that was our lowest reading. Wind chill was an issue for a time too. One report said wind chill was 28 below at the summit on Wednesday. 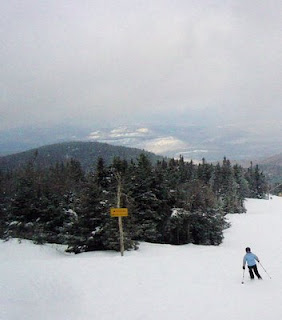 Weds Jan 2: Zelda and I have our routine for skiing together. I push to get everyone out the door early 7:30 am. We bring Neve to the Bear Cub Den, boot up, get a breakfast sandwich and get on one of the very first Gondis. I push her to hit the top first. She’s at the place where what she really wants is carvable corduroy, or maybe 2″ on top of that. (Who doesn’t want that? I’ll take certainly take it.) Around 11:30 we hit the Saddle for lunch, ski down, ride the Gondi together and then we split- me to the upper mountain, and Zelda to the lower. We’d meet up at 2:30-3:30 at the base. If she’s still got her boots on, it means we are going to hit Twister and Sunway together. If not, we break it down and quit for the day.

One cool thing about Gore…in many cases where there is a glade, there is a blue trail that follows it around. We can ski partial runs together, ride the same chair, and both be challenged. Zelda LOVES Headwaters, Tahawas, Open Pit. There are lots of options. Maybe other mountains are like this. It’s a great feature. FYI Headwaters may was one of the best trails all week for snow surface and fresh sides.

Thurs Jan 3 – Friday Jan 4: So we skied.. Everything was open and it was basically deserted. Getting to the mountain at 7:45, I was parking three cars away from Northwoods Lodge. We’d ski our routine, up and then down the mountain. On Thursday, they opened The Rumor from the headwall down, using the Bypass.

At Gore, Rumor is the steepest, and the top is very steep. I don’t know how steep in degrees. But if the top is icy, very few people at Gore can rip it. The mountain host said it was the first time in 10 years, first time ever basically, that the Rumor had been opened on 100% natural snow. I got to it maybe 20th. It was so skiable for me. On a normal weekend, I’ll hit Rumor either once or not at all. This trip I hit it 6 times in 3 days. I was linking huge GS type turns, both parallel and tele, with a major grin on my face. Maybe 20 turns top to bottom without stopping, with a few hucks in there for good measure.

By the end of the day Friday you had to think about where you were going to ski, but I could still find some fresh. I developed a go anywhere approach on Jan 1, which I probably should have abandoned by Friday. When I took my skis off, I noticed base damage on my right ski. Anybody else miss Mountain and Bordertown? I’m having trouble get a good ski tuning in North Creek right now. If you know somebody good up there, PM me or post it.

Saturday Jan 5: By 11:30, when I left the mountain, it was getting a little crowded at the bottom. I got their very early, by myself. I skied my greatest hits and split. Nine straight days of skiing. By Friday and Saturday especially, I was having trouble getting my left ski around, I was so whipped. For me, if there must be a warm up, bring it on now. I’ve been putting off work to ski, and I am beat. It’s a great feeling.