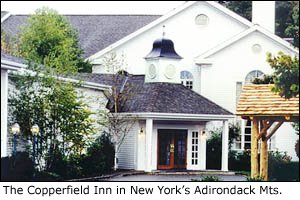 According to sources in town and an article that ran in The Chronicle, Albany Times Union, and other outlets, the Copperfield Inn will reopen. The hotel is North Creek’s largest accommodation and had a great, casual restaurant and bar which had been called Trappers. It is expected that the hotel and restaurant will retain their original names.

In addition, “the Gardens restaurant will open as an Italian themed restaurant, currently unnamed.” Sources say that the hotel and restaurant are targeting year-end for a closing date and Feb 1, 2009 as the date for re-opening. Despite the current economic downturn, I really think North Creek will thrive in the future. According to the article the project will create 25 jobs in town. Kudos to Joel Beaudin, Michael Ellis and the other investors for putting their confidence, effort, time and money into the village.